Iran’s National Internet: The Next Threat to Free Speech? 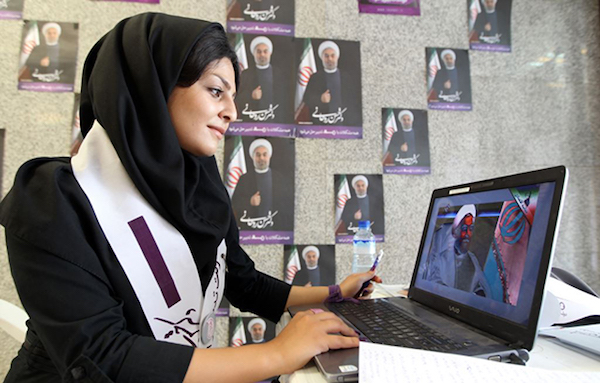 The Iranian government’s plans to create a national or “halal” Internet isolated from the World Wide Web have been underway for more than a decade and have been delayed time and again. Now, with new investments of hundreds of millions of dollars in the technology sector, Iran has shown major progress towards going its own way, causing human rights groups to warn against what they believe will be a threat to users’ safety, privacy, and legitimate access to information.

Discussions of a domestically isolated, monitored, and censored internet service in Iran go back to 2006 when the administration under the newly elected hardline President Mahmoud Ahmadinejad presented a report on the establishment of a “National Internet.” Since then, the project has been subject to delays and disorganization.

“We have previously analyzed Iran’s repression online and discovered that the technical capacities of the Iranian authorities were not as strong as it looked like,” says David Diaz-Jogeix, Article 19’s director of programs, in an interview with Journalism Is Not A Crime. “But this report shows a completely different platform of technical capability to harvest private information from internet users.”

In 2015 alone, the Iranian government spent $285 million on “developing infrastructure, completing technical groundwork, and preparing content for the national information network,” according to the report. It has also invested resources in moving data and domains used by Iranians to domestic data centers. According to the Ministry of Information and Communications Technology, 40 percent of the content visited by Iranian users is today hosted inside Iran.

“The status of the project is delayed and the new target is 2019,” says Diaz-Jogeix. “But they are investing money. So it’s not just vague announcements; there’s a budget allocation behind it. They are providing huge investment in better infrastructure that ultimately will lead to increased Internet speeds and expanded access. So it is quite an investment.”

Article 19 welcomes the growing investments in the information technology and communications sector; yet the contradictory goals of the project are worrying, Diaz-Jogeix explains. While increased connectivity usually provides a better access to free information, empowers individuals, and fosters debate and discussion, the National Internet could result in exactly the opposite.

“The problem is that the overarching goal of the project is to separate the National Internet from the global web by blocking access to content that is hosted outside,” he says. “By moving content inside the country, the authorities are in a better position to not only narrow and limit what is accessible, but also to compromise the security of Internet users and monitor their activity.”

Together with Iran’s strict Computer Crimes Law, which criminalizes offenses against “public morality and chastity” and “dissemination of lies,” the new National Internet could turn out to be dangerous for people expressing criticism of the state online.

“It poses a huge threat not only to human rights defenders, activists, journalists, etc., but also any other users that have access to information. People would not be able to express themselves, because if they did they would either suffer the consequences or their expression wouldn’t be reachable by others. It’s a limitation of rights that is not in accordance with international standards,” he says.

As part of its plan to implement the National Internet, the Iranian government intends to domestically host at least 80 percent of the online content currently visited by Iranian users. In order to do so, it has funded a range of national alternatives to foreign social media, email providers, search engines and internet browsers, while attempting to drive Iranians towards these services by reducing internet speeds on the global Internet.

According to Amin Sabeti, Information Security Analyst and IT Researcher at Small Media, the authorities have already had partial success making Iranians use the National Internet, for instance when visiting state websites or the eGovernment. But when it comes to social media, emails, and Internet browsing, it’s a whole different story.

“A service becomes popular when it has the users’ trust,” Sabeti says. “Usually, Iranian services cannot be trusted and people are not happy to share their information on Iranian services.”

Sabeti adds that if the National Internet is implemented fully, it could make it easier for authorities to shut down the global Internet, although it would be politically and financially costly in the long run.

It remains to be seen how big an impact the National Internet will have on the level of surveillance and censorship online. Iranians have faced censorship on the Internet for years, with many foreign websites being blocked, including social media like Facebook, Twitter, and YouTube. But so far, this hasn’t stopped Iranians – especially the younger, tech-savvy generation – from bypassing the firewall using VPNs or circumvention tools.

Article 19’s program director also recognizes that Iranians are especially tech-savvy when it comes to accessing content that is already blocked.

“The risk is that the selective reduction of speeds on the Internet turns people away,” Diaz-Jogeix says. “And you might have larger parts of the population less tech savvy – those who are finally accessing the Internet because of the high level of investment – who are being diverted to the content the government wants you to access.”

“We are not alarmists,” Diaz-Jogeix adds. “But we are quite realistic in terms of making the analysis that there is a high risk of success and inspiration to other countries to proceed in this way. The National Internet is not complete, but if it succeeds in its current form it would lead to a digital isolation. It’s worrying.”