New Round of Pressure on Iranian Journalists 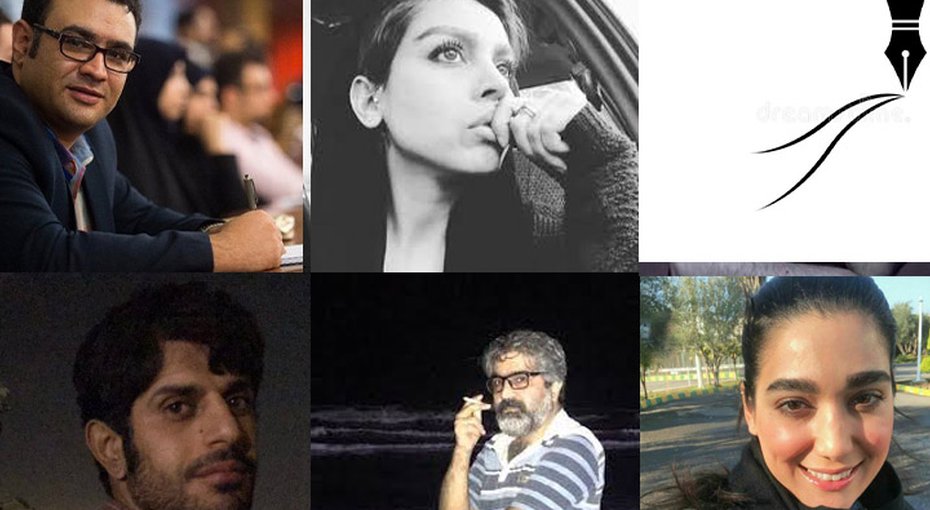 Reporters Without Borders, the Paris-based freedom of expression advocacy group, said in a February 6 statement that the homes of  Maziar Khosravi and Yasman Khaleghian were searched on January 26; on February 3, agents went to the home of Hajizadeh Moloud; and on February 6, they raided the home of Ehsan Bodaghi. Computers, cell phones, tablets and other personal belongings were seized during the raids.

A number of those journalists summoned for questioning, or others whose homes were also searched, have been reluctant for their names to be published.

The latest campaign to pressure journalists started around November of last year, when protests erupted across Iran over the fuel price increases, and continued after the Revolutionary Guards shot down a Ukrainian passenger plane in early January. Journalists in the mainstream media have been targeted as well as social media users and other online activists.

"We are deeply concerned and alarmed," said one journalist who did not want to be named. "We really don't know the reason for these actions and who will next be targeted. I wish the IRGC would at least tell us what is going on. Some of the journalists whose homes were searched were not even working in the media or on social media."

Interrogations of the summoned journalists have reportedly focused on their activity and influence on social media, including Twitter and Instagram.

A source gave Journalism is Not a Crime further details of the interrogations. "In some interrogations they have shown [the journalists] a printout of their tweets and asked them to explain,” the source said. “Some printouts were even related to journalists' private messages or deleted tweets. The pressure was so high that they decided to close their user accounts, at least for a while.”

The source added that journalists were asked why they retweeted news published outside Iran, why they wrote comments under tweets that were critical of Iranian authorities, and why they followed particularly social media users from outside Iran.

The search warrants, orders for confiscation of materials and to interrogate the journalists were issued by Branch 16 of the Culture and Media Prosecutor's Office.

Observers have said that the summons, raids and confiscation of belongings represent a “new way” for Iran’s judicial system to exert control over journalists, and are a change from the legal warnings that were issued in the past.

Ali Mojtahedzadeh, a lawyer, protested against the raid on journalists' homes and said on Twitter: "This morning, agents from IRGC intelligence section entered the house of Ehsan Bodaghi and confiscated all his and his wife's personal communication devices, including cell phones and laptops. A new method that is replacing legal warnings."

Government agencies had warned newspapers and news websites to not publish negative news regarding the fuel price rise sin November. But some journalists turned to social media, especially Twitter, to share their criticism of the move. Journalism is Not a Crime knows of at least one journalist, Mohammed Mossaed, who was arrested because of his tweets.

Instances of media outlets self-censoring, rising from fears of newspaper bans or harassment and even imprisonment,  continued beyond the November protests and after the crash of the Ukrainian Airlines flight. But more journalists have also turned to Twitter and Instagram to criticize the authorities or to retweet news by the media outside Iran on the truth of the Ukrainian plane crash.

Eighty Iranian journalists have also recently signed a statement saying: "We are tired of hearing so many lies from official media, and we regret that newspapers have repeated a big lie in line with the 'national media' without investigating events, and have helped to conceale the truth, which left them nothing but shame and disgrace."

The November 2019 protests and the Ukrainian Airlines tragedy – which together resulted in the death of hundreds of Iranian citizens – are now so feared by Iran’s government that their response is to summon and bully journalists into silence.

They Could be Arrested at any Time

Reporters Without Borders added, in its February 6 statement, that while “None of [the journalists] has so far been arrested … all of them know they could be arrested at any time.” The statement added that “Some have been warned by the media outlets they work for of the need to ‘pay attention to what you say on social media.’ Some of have had to close their Instagram, Twitter or Facebook accounts, or to stop posting on them.”

The advocacy group has condemned the summons, searches, interrogations and harassment of Iranian journalists, as well as the pressure placed on them to close social media accounts for posting news and comments criticizing the authorities or discrediting government deceptions..

A Tehran-based journalist who spoke with Reporters Without Borders also said: “I received a summons to go to the ministry of intelligence. It was given to me by my editor, who had already warned me to take care with what I said in my tweets. I told him I wouldn’t go because being summoned like that was illegal. That evening someone called me and, without even saying hello, began to insult me. The next day at the ministry of intelligence, it was even worse. I was accused of everything and anything and was forced to sign an undertaking to close all my social media accounts. I’m now waiting to be summoned before a court.”

Another journalist, this one in southern Iran, told Reporters Without Borders that: “I was summoned and interrogated by Revolutionary Guard intelligence officials, mainly about my Instagram posts in which I said I regretted having relayed the official lie. They told me: if you want to stay alive and not spend the next ten years of your life in prison, shut your mouth and your social media accounts! That’s all. Don’t collaborate with the enemy!”

The statement emphasized that the IRGC is also continuing its “manhunt” on social media, where Iranian journalists outside the country first claimed Iran had shot down the Ukrainian airliner, claims which were later shared by citizen journalists inside Iran. Reporters Without Borders said that at least 20 online activists inside Iran had been summoned and arrested across the country since November.