Weekly Censorship Report: Translator Sentenced to 11 Years in Prison and Rally to Support the Arts 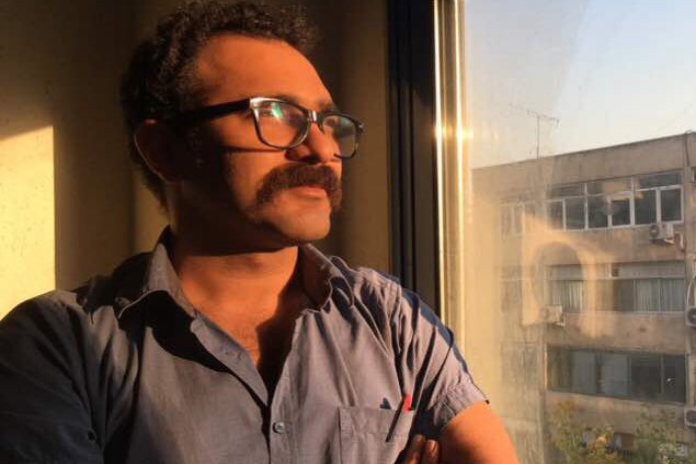 Arash Ganji, a writer and translator and the secretary of the board of directors of the Iranian Writers' Association, has been sentenced to 11 years in prison by Branch 28 of the Revolutionary Court.

On December 30, the Writers' Association publicly announced the harsh sentence brought against Ganji, stating that he had been sentenced to five years in prison for "conspiracy and conspiracy to act against national security," five years’ imprisonment for "membership and cooperation with an anti-regime group," and one year in prison on charges of "propaganda against the regime”.

If the sentence is upheld in the Court of Appeals, according to Article 134 of the Islamic Penal Code, his maximum sentence — five years in prison — will be carried out.

The Writers' Association reported that Ganji was charged in connection with the publication of a book entitled A Small Key Can Open A Large Door: The Rojava Revolution.

The book, which examines issues relating to and developments in Syrian Kurdistan, is a collection of articles translated into Persian by Arash Ganji and published by him in 2017. Ganji was arrested by Ministry of Intelligence agents on December 22, 2019, two years after the book’s publication.

Ganji was temporarily released on a bail of 450 million tomans [US$18,000] on January 19, 2020 following interrogations. His first court hearing was held on June 14, 2020, but after the trial, Judge Mohammad Moghiseh, who has made a name for himself by issuing heavy sentences against journalists and opposition figures, ordered his arrest. Ganji was released six days later, on June 20, until the end of his trial.

Almost a year after his first arrest, his lawyer, Nasser Zarafshan, was notified of his 11-year prison sentence on December 29, 2020.

Ganji has appealed the ruling.

Arash Ganji’s translation credits include the books The Sunset of the Gods of the New World Order and The Struggle over the Way of Thinking in the Working Class Movement.

Three other members of the Writers' Association, Abtin Baktash, Reza Khandan Mahabadi, and Keyvan Bajan, were transferred to Evin Prison on September 26, 2020 to begin serving their sentences.

The three writers were charged with "propaganda against the regime" and "conspiracy to act against the security of the country." Reza Khandan Mahabadi and Baktash Abtin were each sentenced to six years in prison and Keyvan Bajan was handed down a prison sentence of three and a half years.

Amin Moradi, a poet and another member of the Iranian Writers' Association, was arrested on November 29, 2020 by Ministry of Intelligence agents after they searched and confiscated his personal belongings. He was released on December 7, 2020 on a bail of 500 million tomans [$20,000] until the end of his trial. The charges against him are not known, and nor are the details of the trial.

In the same week, Iranian artists, theater professionals, and musicians came together to voice their anger over the Iranian government’s failure to support them through the coronavirus pandemic, but also over its persistent refusal to value the arts in Iran and protect the nation’s heritage, as well as its tactic of blocking Iran’s creative arts.

On the morning of Sunday, January 3, members of the board of directors of the Theater House, along with artists, actors and other theater professionals, gathered in front of the Iranian parliament to protest against the crisis their profession faces, despite one director dismissing the protest as a “dead end”.

Iran Theater House is a coalition of 17 associations linked to the performing arts, including organizations for acting, directing, playwriting, stage design, makeup, costume design, and music. Altogether, the Theater House coalition has a membership of about 2000 people. Members of the board of directors of each of the associations participated in the rally, which took place outside the north door of the parliament building.

At the beginning of the rally, Iraj Rad, chairman of the board of directors of the Theater House, said protesters had sent a letter to members of the parliament, setting out their complaints.

One part of the statement, which was read out by Hamid Reza Naeimi, a distinguished member of Iran’s acting community, addressed the members of parliament: "Tell us, what have you done for the flourishing of the language, poetry, story writing, and novels of this land? What big and valuable step have you taken for theater and cinema? How do you assess the present situation of music, painting, and sculpture? If you also belong to the theater family, tell me what efficient and effective planning or management you have figured out for the fate and life of this art in the last half-century? Time and time again, you have been indifferent to the statements and grievances of this part of the living heritage of Iran, just as you passed indifferently and silently by the thieves and night owls who looted our heritage and registered it in their name. Not a single protest, not one act of defense!"

The statement continued: "We do not know what answer to give when our children ask: where is our instrument the Tar? Where is our proud sport of polo? What happened to Nezami and Roumi and Roudaki? Where is our spiritual Hazarafsan, Shahnameh, Panjaganj, Mantegh al-Tair, Bustan and Golestan, Masnavi? And now, with anger and grief, we ask you for a part of our modest infrastructural demands, because fulfilling it is your duty toward the citizenship rights of this forgotten section of society — what all the great and cultured countries of the world have done."

The statement also alludes to the administration of Hassan Rouhani, which it said had failed to solve the crisis in Iranian theater and performing arts. "Now that the government of Wisdom and Hope, the Ministry of Culture and Islamic Guidance, and the Performing Arts Center are also not able to get out of this crisis, this is your test. Prove that the concern of Iranian arts, which belongs to all Iranians, is yours as well."

Over the last few days, the physical protest has been driven by an active social media campaign to evoke a strong visual and emotional message, urging parliamentarians to take action on their “union and civil demands” and calling on people to take part in the rally.

"Closing theaters is better for the government and therefore it has no interest in helping it," said one actor and director who asked not to be named, referring to the closure of theaters due to the coronavirus pandemic.

The Theater House protesters voiced several demands, many of which have been highlighted before, and prior to the outbreak of coronavirus, although the pandemic has certainly intensified these problems and brought them to a crisis point. They called for an ”increase in the support budget for theater productions", "pensions for the heads of low-income households“ [for people working in the industry], “including support for the theater in the budget," "insurance facilities", "allocating grants and low-interest loans," and "unemployment benefits for those whose jobs were lost due to coronavirus” and for other reasons. According to the actor and director, since the outbreak of coronavirus in February, artists have been entitled to benefits on only two occasions: in April 2020, the Theater House paid its members a total of one million tomans; and in November 2020, 1.5 million tomans was paid out of the artists' credit fund to its members.

Members are entitled to apply for loans at an interest of 18 percent: "When an artist cannot work, how can he afford an 18 percent interest loan?" the protest statement said."Government loans must be interest-free."

Meanwhile, domestic media reported in May 2020 that the poverty line in Iran was currently at 9 million tomans [$360] a month for a family of four or 2.2 million tomans [$90] per individual.

In this sense, aid allocated to many members of the Theater House during this period, amounting to one million to 1.5 million tomans, has not even meant these households reached the poverty line.

From March to June 2020, theaters in Iran were closed due to coronavirus, so people working in the industry were unable to earn money. As protests against closures increased, theaters reopened on June 21, and performances went ahead until October 5, with social distancing and other regulations being observed. However, on October 5, coronavirus cases were on the rise, and all performing centers and theaters in Iran ceased to operate.

It may well have been the correct decision to keep theater venues closed in Iran due to health concerns, but there is no doubt that the theater community is suffering financially and psychologically after not being able to perform in front of audiences for such a long period of time. The industry absolutely needs support from the government.

"Before today's rally, Theater House board members had several meetings with the country's officials," said another theatre director, who also asked not to be named so that he would not be "further troubled”.

"In these meetings, officials listened to the professionals and promised to improve conditions, but their promise remained just that, a promise.”

According to the director, the Theater House previously met with parliament's cultural committee, with the city council's cultural committee, the Deputy Minister of Culture and Islamic Guidance, and with the director of the Performing Arts Center in an attempt to solve the problems of the industry. "Now a statement has been sent to the parliament to solve the problems of this small community, which is not more than a few thousand people."

However, the director added that other artists did not attend partially due to skepticism about such gatherings. ”We know these are just a show and nothing will happen after these gatherings. In the end, the MPs issued a warning to the Ministry of Guidance. We know our demands will not get anywhere. The government has no money; the oil minister said today we know that burning mazut is dangerous, but we have no choice but to burn it. In this situation, how much attention do you think they will pay to a gathering of theater artists. We are all dying as Becketts in this land, watching these fruitless gatherings."

"The culture of a country that has no dynamic theater is in decline," the Theater House people said in their statement. "Theater culture is a sign of democracy and freedom of expression in that country.”

Iran’s theatrical community has always faced censorship and repression at every level: from obtaining licenses for the publication of plays, restrictions on holding and attending festivals, budgets allocated for performances, bans on the plays of some writers, as well as restrictions on what female actors can wear on stage, including wigs.

In recent years, several artists have even been brought before the Culture and Media Court to answer questions about specific performances, including Mohammad Rahmanian, a prominent Iranian theater director, who in January 2019 was summoned and detained for an hour in connection with a public event entitled Concert-Performance of Old Songs: Peykan Javanan.

Director Maryam Kazemi and Saeed Asadi, the director of the City Theater, were summoned to Evin Court on September 9, 2018 following a performance of William Shakespeare’s A Midsummer Night's Dream in the theater’s main hall. They were detained on the pretext of prolonged investigations and the fact that they were detained toward the end of a working day, delaying these investigations.

Asadi was sent to Evin Prison and Kazemi to Qarchak Prison. They were released the day after, on September 10, following mediation from the director of the Performing Arts Center.

In addition, Masoud Hokmabadi, a director based in Mashhad, was sentenced on charges of "propaganda against the regime" and "insulting the founder of the Islamic Republic” after he boycotted the Fajr Theater Festival in 2020  in protest against the Revolutionary Guards shooting down a Ukrainian International Airlines passenger plane. He was sentenced to two years in prison. The Fajr Festival is held every year in February to mark the victory of the Islamic revolution.

Hokmabadi denied the accusations and wrote on his Instagram page: "We are all potential criminals in our beloved country; we have to see when and who decides to make this potential a reality."