Mohammad Pourmand: They Arrested Me because I Tweeted “Don’t Kill People” 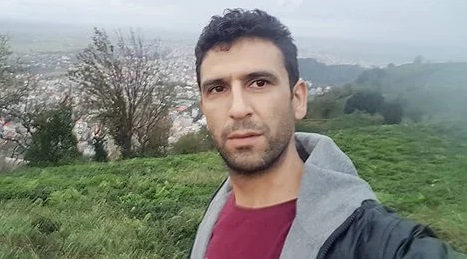 Mohammad Pourmand lived and worked his entire life as an air conditioner repairman in Iran. Then he was arrested by the Revolutionary Guards’ intelligence agency, and sentenced to 22 months in prison for a string of tweets criticizing the government.

Now living in exile in Turkey, Pourmand has spoken to Journalism is Not a Crime about the harrowing experience of leaving his country behind – and the culture of censorship that forced him into it.

Mohammad Pourmand spent most of his adult life in Rasht, capital of the northern Iranian province of Gilan. By day he worked as an air conditioner installer and repairman, but could also not remain indifferent to what was happening in his country.

From July 2015 onward he maintained a Twitter account under the username Serpico. After the brutal crackdown on the nationwide November 2019 protests, he posted numerous tweets criticizing the state-sponsored killing of Iranian civilians. Then in 2020 he spoke out against the downing of Ukrainian Airlines Flight 752 by the Revolutionary Guards.

“The story of that blood-soaked November [2019] is the story of brave men and women,” he wrote in one post, “who were protesting for bread and for freedom. But their lives were taken, they were imprisoned, and they were tortured.”

Eventually Pourmand’s critical tweets caught the attention of the Islamic Republic’s security agencies. To this day he does not know how they identified him, but exactly a year after the demonstrations on November 30, 2020, he was arrested by agents of the Revolutionary Guards’ Intelligence Organization.

“I was at work, installing an air conditioner,” Pourmand, now 40, recalls, “when my brother called me and told me: ‘Come here right now.’

“He sounded agitated; I thought perhaps the family were in trouble. So I went straight to where my brother had told me to go. Just after I greeted him, five people suddenly got out of two cars, and they took me away, blindfolded and handcuffed.”

Pourmand was held for five days in solitary confinement at the Guards’ Intelligence Bureau in Rasht. The interrogation process, he says, was neither calm nor polite. “They shouted at me to confess – to things like having connections abroad or following the guidance of journalists and activists inside the country. But I resisted. I told them, ‘You have my laptop and my mobile phone. You can look at anything and you’ll know I was only expressing my own views. I was protesting against the killing of the people.”

The interrogators, he says, repeatedly told him he had been working to incite armed uprisings against the regime. “And I repeatedly told them that this was simply not true.”

On the last day of interrogations, the officers had him sit on a chair in front of a camera and repeat the various allegations they had put to him over the past five days. “I told the camera that I’d published those tweets in sympathy with the families of those killed in November, and on the passenger plane.

“As an Iranian, I said, I was fed up with all this tyranny and economic strife. They asked me about the real identities of a number of anti-regime Twitter accounts and I told them that I had no idea, and had only communicated with their assumed names on Twitter.”

After the interrogation, “Serpico” was sent to Branch 13 of Rasht Revolutionary Court. After questioning him, the presiding magistrate ordered his release, pending trial, on a bail of 60 million tomans (close to US$15,000). He was transferred to Rasht’s central detention center and released two days later after posting bail.

The Five-Minute Trial – and a Hellish Escape

Eventually, Pourmand received a court summons in early February 2021 that ordered him to appear before a judge on February 21. “I went,” says Pourmand, “but the trial lasted less than five minutes. The judge didn’t even give me chance to defend myself.”

A few days later, he was summoned back to the court in Rasht to hear the verdict, a transcript of which has been seen by Journalism is Not a Crime. Pourmand was convicted on two counts and sentenced to 15 months and one day for “insulting the Supreme Leader” and to seven months and 16 days for “propaganda against the regime”. He was not permitted to take a copy away with him from court, so he transcribed it by hand instead and lodged an appeal.

On May 9, 2021, Branch 18 of Gilan Revolutionary Court of Appeal upheld the verdict issued by the court of first instance exactly as it was. Pourmand knew he could be summoned to jail within days, so made the decision to leave his country forever.

First he made his way to Urmia, the capital of West Azerbaijan on the border with Turkey. “I really didn’t want to leave my city and my country,” he says. “My whole life was in Rasht. I loved my family, friends and relatives, but they all told me to save myself and escape. When I got to Urmia I contacted a trafficker my friends had introduced to me and, after paying $1,500, I set out for the city of Khoy near the border.”

From here onward, Pourmand’s journey became a nightmare. He stayed for a few days at the people-smuggler’s home before moving toward the mountains together with another trafficker, who was set to take him and others to the Turkish town of van.

“From Khoy we went to a border town and lived in a set of warehouses along with around 200 Afghanis, Pakistanis and Syrians,” he says. “Then they loaded us onto the backs of several Nissans. There were perhaps 30 of us in each and I was getting crushed.

“They had covered us with a black tarpaulin to hide us. But as we got close to the border, the Nissan in front overturned because it was carrying too many refugees. Sadly, one of the Afghans died.

“They removed the body and took the rest of us to another village, and put us up in a stable. The next night we made for the border again. One kilometer from the checkpoint, we got out and had to walk on a dangerous mountain path to bypass it.”

“Death Breathing Down Your Neck”

The valley crossing was terrifying, Pourmand says, and made worse by the freezing conditions. “It was extremely cold; a powerful wind was blowing, and walking on that slippery, snow-filled trail was really difficult.

“One of the guides said two Afghans had slipped on that trail and had fallen to the bottom of the valley. I felt death breathing down my neck. But hard though it was, we finally got to the border fence.

“Part of fence was torn away and we slipped through it. We came to a big pit, apparently dug by Turkish border guards to stop migrants coming through. We – myself and about 200 others – all crossed it with difficulty and climbed up, but suddenly the Turkish border guards were running towards us, shooting into the air.”

The traffickers ordered their cohort to run as fast as they could away from the border to evade capture by the guards. “Those were truly horrifying moments,” Pourmand says. “I felt as if the police were shooting at me personally. For a moment I wanted to stop and give myself up.

“One of the policemen was getting close to me when I finally told myself I had to run, and it didn’t matter if I died, because I was not going to go back to an Iranian prison. We ran for about half an hour until we reached the Turkish traffickers, who were waiting for us. They took us to a river bank, put us in several RVs, and drove us to Van.”

During this leg of the journey, Pourmand says, one of the RVs carrying Afghan and Pakistani refugees was intercepted and all the passengers were returned to Iran. He and the other asylum seekers finally made it, and were lodged in a derelict warehouse where several Afghans were already living.

“They called it a dormitory, but it was more like a stable,” says Pourmand. “They kept the refugees there until their friends and acquaintances came and paid the rest of their travel money. They gave us just a hunk of bread for each meal. I saw one Afghan there who had been shot, and was simply being left to the mercy of God.

“Eventually a friend of mine in Van came and I was released. I’m now living at that friend’s home and have no idea what to do next. On one hand, Van is not a good city to ask for asylum in; many refugees have been languishing here for years. On the other hand, I don’t know how to get to a better city in Turkey because now I’m an illegal immigrant, and if I’m arrested, it’s highly likely I’ll be deported back to Iran.”

After the interview concluded, Pourmand sent Journalism is Not a Crime a video showing an Iranian trafficker flogging an Afghan refugee in Qotur, a district in Khoy County. He added that the way some Iranian and Turkish human traffickers treat Afghan refugees is “truly painful”; they are sometimes beaten ruthlessly and made to hand over all their money.

Mohammad Pourmand is just one of thousands of Iranians who are forced to flee their home country for Turkey every year. This miserable experience is their only alternative to facing a jail sentence for trumped-up or fabricated “crimes”.

“Nothing was more painful than being forced to leave my country,” Pourmand tweeted after arriving in Turkey. “My last moments there were filled with the trembling voice of my sister and the weeping of my brother. I saw their tears, but I had to leave them.

“I left part of me behind. I am suffocating. All I wrote was ‘Don’t kill people’; I didn’t want to remain silent in the face of tyranny. Is that such a great sin?”