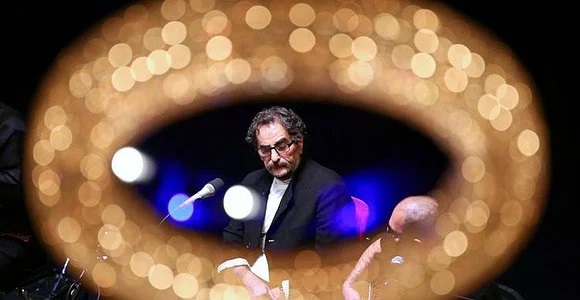 For years, countless Iranian singers, pieces of music in live performances, female musicians and even music-themed broadcasts by Islamic Republic of Iran Broadcasting and other official departments have been scrubbed in Iran for no apparent reason.

The censorship of images is perhaps the strangest of all. While a song is being played live, the IRIB’s cameras try to avoid showing the images of the musical instruments by hiding them behind flowers and other props, and adjusting the camera angles.

Other arms of the state including municipalities have recently tightened up on music censorship. The reasons for this are unclear. There are no hard-and-fast guidelines, and it seems that individual managers’ taste as much as ideological doctrine informs what type of artistry is censored, and when.

Shiite jurisprudence is not clear about music

In an interview with Journalism is Not a Crime, a prominent veteran music researcher, who wishes to stay anonymous for safety reasons, says that the main issue facing both artists and broadcasters in Iran today is that Shiite jurisprudence on the matter is hopelessly confused.

In the early years after the revolution, various once-ordinary activities such as the TV broadcasting of performances – and even the buying and selling of musical instruments – were banned by Ayatollah Khomeini, the first Supreme Leader of the Islamic Republic.

"Gradually,” the music researcher says, “given that revolutionary songs needed to be played, Khomeini implicitly agreed to the buying and selling of musical instruments again. It was stated that in order to sell an instrument or play, certain conditions had to be met and the reason for it had to be examined.

“The Supreme Leader said at that time that if music was serving as an invitation to sin, and incited people to unreligious acts, it was haram (forbidden). This opened up the space somewhat more than when musical instruments were banned completely."

The utter incredulousness of Khomeini’s instructions on this matter led to a debate in Shia jurisprudential though that has never been resolved since. "It is not possible for the music itself to be halal (permitted) and the instrument to be haram,” the music researcher says.

“In my opinion, on the issue of whether or not musical instruments are shown, we should be looking at who the director is. Basically, we have two categories of managers in the IRIB: one group that wants to depict the harsh face of religion, and another we can officially term ignorant.”

There is No Official Ban on Depicting Musical Instruments

The IRIB directors’ role, the music researcher believes, in the most decisive in censoring any and all aspects of musical performances. Some have no hesitation in putting musical instruments on display, as they have been in performances on the 4, Documentary and Jam-e Jam channels. But others excise them from their broadcasts, even cancelling entire pre-recorded programs on the basis that musical instruments appear in them.

Hamidreza, who asked for his second name not to be published, is the director of a music distribution company in Iran that has worked with a multitude of pop singers. "Just as there are one thousand and one reasons for the censorship of musical instruments in the IRIB, so there are reasons to show them," he told Journalism is Not a Crime.

“We see various different performances shown the IRIB. The job of someone like me, who has been dealing with the ministry head and the IRIB for two decades, is to see what kind of a person the ‘current director’ is.

“Music can be broadcast together with any instrument if the network director is a good person. But that’s why we see this duality, whereby one channel displays the instrument without a hitch and the other does not."

Managers at the IRIB must pass stringent vetting procedures before taking up their roles. They know full well that any slip-ups will not be tolerated, and could spell the end of their careers. This is true not only of the state broadcaster but also municipalities, gig venues, concert halls, galleries, cinemas, and many other places besides.

The prominent music researcher believes that “Unfortunately, the directors of the organizations that ought to be in charge of cultural affairs are more religious than the Prophet, as the saying goes." While Shiite jurisprudence does not take issue with musical instruments, she says, it is the directors who knowingly engage in one form or other of self-censorship.

The scholar recalls one incidence of music-related censorship at an event she co-organised with an Iranian gallery: "An exhibition of photographs, handwriting and memorabilia was to be held to mark the birthday of Hassan Kasaei, a ney [Middle Eastern flute] player.

“After several months of uncertainty, it was agreed that the exhibition would go ahead, but on the day itself the municipal security agents blocked it because Kasaei was a music personality. All the expenses I had personally paid, to print out flyers and host the event, seemed to have came to nothing.

“I consulted with my friends about it. We announced to the officers that Master Kasaei's instrument was not the instrument of fun, cafes, or cabarets, but rather that he played the ney: an Ashura [an annual Shia day of mourning] instrument. As soon as the word Ashura was mentioned, the permit was issued forthwith!"

Music publishing director Hamidreza said his firm had jumped through similar hoops to obtain licenses from the Ministry of Culture and Islamic Guidance. “The Ministry is very strict. We interpret songs in thousands of different ways in order to get a license; more so than even the great masters of literature and poetry

“We generally have no problem performing in concert halls. But if it is to be broadcast on the IRIB, we absolutely have to put a cello next to the violin, and also put one or two dafs [Middle East framed drums] next to the tonbak, which is known as a ‘fun’ musical instrument.”

The Politics of Hiding Musical Instruments

Some novice artists and even veteran performers are willing to hide their instrument while playing in order to appear on TV. At a recent digital concert given by Shahram Nazeri, a prominent singer of Iranian traditional music, the instruments were filmed only from a great distance while the close-ups were notably limited to the musicians' faces.

The music researcher believes that artists, if made aware of plans for censorship of instruments before their performance, should challenge it. “They ought to ask why, and raise an objection,” she said. “Allowing instruments to be hidden behind flowers and nightingales is a great betrayal –  against both the instruments and the music."

In the 2010s and after the establishment of SATRA, the Iranian Audiovisual Regulatory Media Authority, all issues related to the broadcasting of video content, both on television and in cyberspace, fell to the directors of the IRIB to resolve.

The outcome is that the rules on music censorship have become more ambiguous than ever. In 2019, painted musical instrument was scrubbed out of a mural in Hormozgan province after a ruling by Bandar Abbas Municipality – resulting in the strange depiction of a group of two young people with nothing in their hands, and two more whose torsos had been completely erased, leaving only their legs suspended in the air.