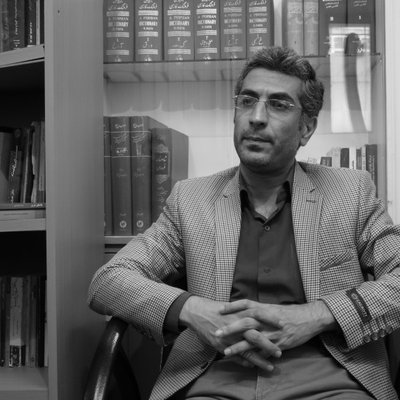 Conspiring against national security
Insulting the sacred
Propaganda against the regime

Akbar Jabbari is a writer and researcher who lives in Tehran. He was born in 1973 in Zanjan. Jabbari’s research focused on areas such as mysticism, literature, and philosophy, and he is a graduate of Mysore University in India.

Jabbari was summoned to the Ministry of Intelligence Investigation and Supervision Offices in Tehran on July 4, 2020. Following his summons he was arrested by security forces on July 5, 2020 and transferred to Evin Prison.

Two days after his arrest, Mehdi Salimi, another Iranian writer and translator, was arrested following an arrest warrant that was issued by Branch 2 of the General and Revolutionary Courts of Ahar. These arrests were made as part of a joint case initiated by the Ministry of Intelligence.

In his legal case, Jabbari was charged with “propaganda activities against the Islamic Republic of Iran,” “blasphemy against Islam,” “encouraging people to carry out corruption and prostitution” and “gathering and colluding against the security of the country.” Jabbari is currently being imprisoned in a state of temporary detention in Section 209 of Evin Prison, which is affiliated with the Iranian Ministry of Intelligence.

Akbar Jabbari is the son-in-law of Allameh Davani, a prominent contemporary scholar of Nahj al-Balagheh, a collection of sermons, letters and other pieces by the Prophet Muhammad's descandant Imam Ali, and Bihar al-Anwar. a collection of Shia Islamic traditions compiled by the 17th century Iranian scholar Mohammad Baqer Majlesi]. Davani is also the brother-in-law of Gholam-Hossein Elham, a prominent Iranian politician under Ahmadinejad, a close associate of Mahmoud Ahmadinejad and a former member of the Guardian Council.

Akbar Jabbari has authored a number of books which have been published in Iran in recent years. These books include About Poetry: A Look at Ferdowsi, Nezami, Rumi, Hafez, [Abdul-Qadir] Bedil, Maaref, The Question of Existence with a Look at Martin Heidegger's Book on ‘Being and Time’, Philosophy, Reproduction, Gender, Reflections on the Principles of Classical Sciences, Phenomenological Reflections in the Meaning of Culture, Fundamentals of Heidegger's Existential Therapy, Silent Wisdom and Iqbal as Reflected in his Poetry with a Selection of Poems.