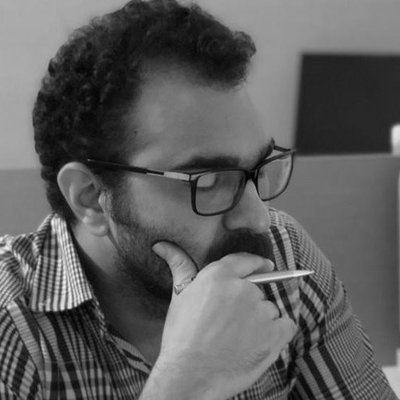 Arash Ganji is a writer and secretary of the Board of Directors of the Iranian Writers’ Association.

Ganji has also translated a number of books, including The Sunset of the Gods Over the New World Order and Fighting the Working Class Movement’s Way of Thinking.

On December 22, 2019, Arash Ganji was arrested by officers who identified themselves as "security police."

Baktash Abtin, a member of the Board of Directors for the Iranian Writers' Association, published a post on his Instagram page in which he wrote that several agents had entered and searched Ganji's house, after which they confiscated a number of his personal belongings and took him away.

On December 26, 2019, Pooyesh Ganji, Arash Ganji's sister, who currently lives in the United States, spoke to Journalism is Not a Crime about the arrest, saying that Arash Ganji had been transferred to Section 209 of Evin Prison, which is under the control of the Ministry of Intelligence. She also stated that, after his arrest, her brother had only been allowed to contact his family once.

Pooyesh Ganji spoke of her brother’s call to his family, saying: “Arash called home one day after his arrest and talked to my mother briefly. He asked my mother what time it was so that he could know when he had to take his medication. He was being kept somewhere where he couldn’t tell the time and after that he wasn’t able to phone again.”

Ganji also spoke about the manner in which her brother had been arrested, saying: “On the morning of December 22, officers called Arash’s phone, but Arash was in the shower and getting ready to go to work at that time. Then the officers rang my father and my mother. They both live in the same apartment building. Arash lives on the first floor and my father and my mother live on the third floor. My father answered his iPhone and the man on the other end of the call told him to go downstairs and pick up a package that had arrived for Arash. It was an agent from the Ministry of Intelligence pretending to be a postman.”

Pooyesh Ganji continued, saying: “My father went down to get the package, but the officer said that he had to deliver the package to Arash himself. He followed my father to the back door of Arash's house, and when Arash opened the door, my father said that four other armed agents suddenly entered the building. There were a total of five officers, each of them armed with a handgun. They entered the house and one of them showed Arash a search warrant. They then searched the whole house and confiscated Arash's personal belongings, including his laptop, books, and some of his personal writings. After they had finished their search, they showed Arash an arrest warrant and took him with them.”

In response to a question about whether Arash had been threatened before his arrest, Pooyesh Ganji said: “Yes, I heard that before his arrest, someone called him and told him over the phone: ‘We’re coming to get you.’ But I don't know anything more about that.”

The Iranian Writers’ Association published a statement on their website, following Ganji’s arrest, saying: “Arash Ganji suffers from heart disease. His arrest and the coercion he has faced during interrogations is a flagrant violation of the internationally accepted notions of the human and legal rights of the accused and it serves only to endanger his life. The responsibility for any harm that comes to Mr Ganji lies with the institution that is in control and that has issued his arrest. This institution has shown that the only response to individuals exercising their right to freedom of expression is beatings, imprisonment and murder.”

The Human Rights Activists News Agency (HRANA) announced on March 31, 2020, that Arash Ganji's trial would be held on June 14, 2020, in Branch 28 of the Islamic Revolutionary Courts of Tehran. They also announced that he had been accused of “gathering and colluding with the intention of committing actions against national security” and “propaganda activities against the state.”

During the court hearing on June 14, in an unusual move, Judge Moghiseh, the head of Branch 28 of the Revolutionary Courts of Tehran, increased Ganji's bail to 3 billion tomans. As a result, Arash Ganji was arrested and transferred to Evin Prison. However, after six days of detention, he was released from prison on the previous bail amount (450 million tomans) on June 21, pending the court’s final verdict in his case.

Details of the court hearing and the verdict have not yet been released.

The Iranian Writers’ Association is a non-governmental organization, established in 1968, working towards the formation of a writers’ guild and fighting against censorship. The members of this association are made up of writers, editors and translators.

Since the 1980s, members of the Iranian Writers’ Association have faced varying degrees of repression, from censorship, legal prosecution and even murder. In the 1990s, Mohammad Mokhtari and Mohammad Jafar Pooyandeh, two academics and members of the Iranian Writers’ Association, were assassinated by agents of the Iranian Ministry of Intelligence. Their killings were part of an infamous series of assassinations of intellectuals and dissidents carried out by the Iranian government which became known as the Chain Murders. To date, neither the Iranian government nor the Ministry of Intelligence have faced any form of repercussions for the murders.

More recently, three other members of the Board of Directors for the Iranian Writers’ Association, Baktash Abtin, Keyvan Bajan and Reza Khandan Mahabadi were sentenced to six years in prison by the Revolutionary Courts.

Confirmation of the initial decision in the Court of Appeal

The Writers' Association of Iran announced on February 27, 2021 that the sentence of 11 years in prison for this author has been confirmed in Branch 28 of the Revolutionary Court of Appeals.