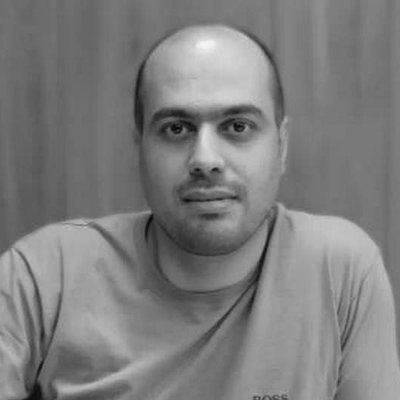 Four years and six months in prison, two years of which are mandatory

On the morning of November 5, 2018, plain-clothes officers raided the home of Massoud Kazemi, a former journalist for Sharq newspaper, arrested him and confiscated a number of his belongings. He was held for over a year at an unknown location before being sentenced to four years and six months in prison on three separate charges.

Kazemi was also the former editor-in-chief of the Sedayeh Parsi monthly journal and a former reporter for Qanun newspaper. Kazemi started his professional career at Qanun newspaper and later joined the social media service Mardom Emrooz or People Today.

Shima Tedrisi, a relative of Kazemi, reported his arrest on her Twitter account, posting that "According to the neighbors, several people entered Massoud’s house and took him with them just before noon today. We do not know why he has been arrested or why they have confiscated his laptop, hard drives, flash drives and some of his other personal belongings.”

According to the HRA News Agency, Kazemi, on his Twitter account, had been involved in reporting about corruption in the Ministry of Industry, Mines and Trade before being arrested. He also asked Hussam al-Din Ashna, an adviser to President Hassan Rouhani, about the “Chain Murders,” a series of murders carried out between 1988 and 1998 by the Iranian government against critics of the Islamic Republic.

On March 2, 2018, several months before his arrest: he tweeted "I want to be a journalist forever ... but can I? We are cursed by everyone and we are indebted to the people of the nation, the fundamentalists, the reformists, the subverters, and so on. There is no security for us and no peace."

Iranian judiciary and security officials have yet to comment on the reasons for Kazemi's arrest or any charges against him. But his arrest provoked widespread reactions on social media.

Ali Ahmadnia, the former editor-in-chief of Eslahat News’, said: “Last night I was with Massoud Kazemi. We talked about everything from our family to our children and so on. He told me: ‘Ali, my analysis in this situation is that the conditions are not going to get any worse, so we should be sympathetic and supportive of our country no matter what.’ He said this with a smile that there would be no more arrests. But now I have heard that he has been arrested and I am shocked.”

In a statement issued on November 7, 2018, Reporters Without Borders also condemned Kazemi’s arrest and the arrest of several other Iranian journalists, and called for their immediate and unconditional release.

Kazemi was released on bail on November 11 after a week in detention. According to his lawyer, Seyed Ali Mojtahedzadeh, his temporary release order was issued by the investigator of Branch 9 of the Culture and Media Courts.

However, on May 22, 2019, Kazemi was arrested and sent to prison in the first session of his trial, which took place in Branch 28 of the Revolutionary Courts, presided over by Judge Mohammad Moghiseh. During the session Judge Moghiseh increased Kazemi’s bail from 100 million tomans to an exorbitant one billion tomans. As Kazemi was unable to submit bail, he was transferred from the Revolutionary Courts to Evin Prison as soon as the session ended.

Numerous requests from Kazemi’s lawyer to reduce the bail and to temporarily release him until the court had issued its final verdict were denied. Kazemi was unable to meet bail and, at the same time, he was unable to earn an income to support his 11-year-old child.

Kazemi was eventually sentenced to two years in prison on charges of “publishing falsehoods,” two years imprisonment on the accusation of “insulting the Supreme Leader,” and six months in prison and a two-year ban on press activities on the charge of “insulting other officials.”

His total jail term was four years and six months imprisonment. This sentence was later upheld in Branch 36 of the Court of Appeals, and according to Article 134 of the Islamic Penal Code, at least two years of the sentence must be enforced.

On October 28, 2019, the lawyer Mojtahedzadeh told the IRNA News Agency that Kazemi's case had been transferred from the Security Courts to the Culture and Media Courts.

Mojtahedzadeh expressed the hope that the transfer of Kazemi’s case to the Culture and Media Courts would mean that they would be able to apply for his parole.

Despite many failed requests for temporary leave, Kazemi was finally granted a leave of absence on January 25, 2020 after serving approximately eight months of his prison sentence in Evin Prison. He returned to Evin Prison 20 days later, on February 15, where he is currently serving the remainder of his sentence.