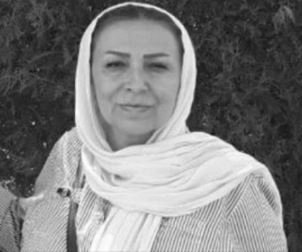 Six years in prison, 74 lashes of the whip, compulsory study of two specified books, two-year ban on membership of any form of political and social party or group

Retired worker, union activist and member of the Board of Directors of the Free Trade Union of Iran

Nahid Khodajooo, a retired worker and a member of the Board of Directors of the Free Trade Union of Iran, was arrested on May 1, 2019, on International Workers' Day, at a demonstration in front of the Iranian parliament. Dozens of other participants in the demonstration were also arrested when security forces infiltrated the protests and incited violence among the peaceful protestors.

On June 3, 2019, Khodajooo was released on bail until her court hearing. She appeared before Branch 26 of the Revolutionary Court of Tehran, presided over by Judge Iman Afshar on August 1, 2019. Her last hearing was held nine days later, on August 10, 2019, at Branch 4 of the Evin Prosecutor's Office. Khodajoo’s lawyer, Manizheh Mohammadi, was also present throughout these hearings.

She was sentenced to six years in prison, 74 lashes of the whip and a number of other smaller punishments, in Branch 26 of the Revolutionary Court of Tehran; the charge of “gathering and colluding with the intention of committing actions against the state” drew a five-year jail term, with a year for the charge of “disruption of public order and peace.”

Khodajoo was also sentenced to a compulsory study of two books specified by the court and a two-year ban on the membership of any form of political party or social organization.

A hearing at the Court of Appeals was held, without Khodajoo or her lawyer present, and her six year prison sentence was upheld.

The Free Trade Union then published a news release in which they emphasized that the Court of Appeals needed to uphold the rule of law, referring to Article 450 of the Islamic Penal Code, which states, “the need to convene an appeal hearing in the presence of the accused or their defense counsel.” The Free Trade Union highlighted the fact that the verdict had been issued without the presence of either Khodajoo or her lawyer.

Despite this, the appeal court's ruling was never directly sent to Khodajoo. Instead she was only informed of the verdict when her lawyer verbally told her that the court's initial ruling had been upheld and that her six years prison sentence was still in place.

According to the Free Trade Union, Khodajoo was summoned to the Evin Prosecutor's Office on April 15, 2020 to serve her sentence. The Union condemned the summons to serve her sentence in light of the coronavirus outbreak in Iran, stating that the epidemic threatened the health and wellbeing of prisoners. A section of their statement said: “Despite the very dangerous conditions in the country’s prisons due to the Covid-19 outbreak, the Evin Court Enforcement Office has summoned Ms. Khodajooo to serve her six prison sentence and only given her five days to report herself to prison.”