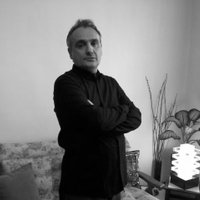 Agents from the Intelligence Unit of the Revolutionary Guards arrested Ramin Karimian, a writer for the quarterly publication Goftegou (“Dialogue”), at his home on the morning of March 15th, and took him to an unknown location.

Karimian is a researcher and a translator working in the field of sociology and an editor. He was born in 1962 and entered the world of books and publishing at a young age. He had a good grasp of the English language and for a period was an editor at the Institute for the Intellectual Development of Children and Young Adults, which was prolific in its establishment of forward-looking activities and publications for children and young people.

Since then, he has published a number of books, mostly about sociology. One example is a translation of Introducing Sociology: A Graphic Guide by Richard Osborne. The book was part of a series called First Step Books published by Shirazeh Publication, which aimed to provide adult readers with easy-to-read and illustrated introductions to topics in science and philosophy.

His work attracted the attention of the Iranian historian, author and translator Abbas Zaryab, who asked Karimian to work with him as his technical editor on a translation of The Story of Civilization by Will and Ariel Durant. After working as an editor with Ney Publishers, he started working with the quarterly Goftegou.