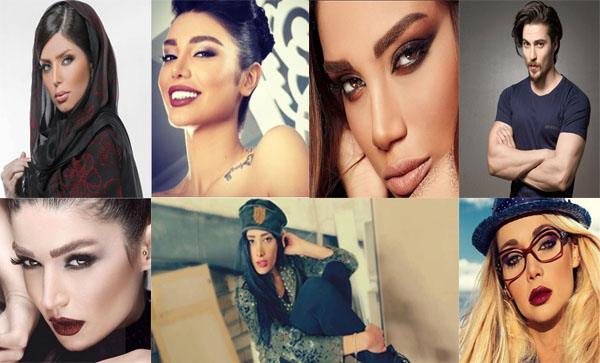 Over the past two days, several fashion boutiques, hairdressers for women, and film and photography studios in Iran have found their Instagram pages blocked or “overlaid.” Among them are pages belonging to several Iranian fashion models who were arrested in late January. A large blue frame declaring their images “blocked” appears in big red letters. Messages displayed on the pages announce that “Operation Spider 2” is underway. 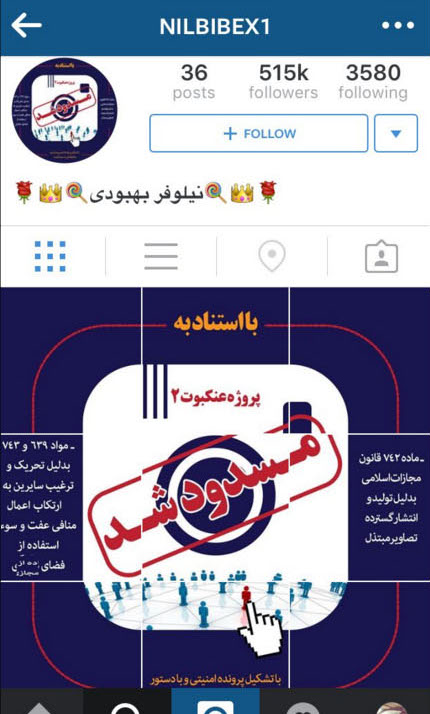 Next to each frame appears the “justification” for blocking the image, and it is the same for all of them: Article 472 of the Islamic Penal Code prohibits producing and publishing “obscene images,” and articles 639 and 743 prohibit inciting others to commit “immoral acts,” and using cyberspace for this purpose.

At the top of each frame, viewers are informed authorities have taken the action under the auspices of “Operation Spider 2.” Under the frame, a further message declares that judiciary officials have ordered the pages blocked, and that they have opened “security cases” to deal with the people behind them.

Following publication of that report, the model Elnaz Golrokh, along with her husband Hamid Fadaei, left Iran. The remaining models’ Instagram pages have now been either blocked completely or replaced with the “Spider 2” logo. In 2015 the Center for Organized Crime in Cyberspace, which is part of the Revolutionary Guards, first mentioned “Operation Spider.”

The center reported that it had arrested several Facebook users for promoting “moral corruption,” and issued a statement explaining its actions. The statement, which was widely distributed on Iranian websites, said that over the course of two years the people arrested had created nearly 350 pages on Facebook, and had attracted large audiences. They were guilty of “promoting a culture of promiscuity, weakening and rejecting the institution of family, ridiculing religious values and beliefs, promoting relationships outside moral rules, and publishing the private pictures of young women.” It also accused them of making money by “deceiving female members of Facebook.”

Iranian media reported the operation widely, but the identities of arrested individuals were never reported. Mostafa Alizadeh, spokesman for the Center for Organized Crime in Cyberspace, said in an interview that his organization had gained information about the arrested people through informers using the website Gerdab, or “Vortex,” which publishes news and reports about the activities of the Revolutionary Guards in Cyberspace. The site, however, has not published anything about Operation Spider 2.

On pages on which the Spider 2 logo has replaced the original content, some Instagram users have left comments expressing their surprise. Some have “liked” the logo, while others have joked, “the Cyber Police know everything.”

After the disputed 2009 presidential election, in the course of which much of Iran’s opposition flocked to cyberspace and social networks, Iran has clamped down on a wide range of online activity. Ahmadi Moghadam, who was commander of the National Security Forces in 2009, ordered the creation of the Iranian Cyber Police to handle “crimes” online. Its stated mission was “safeguarding religious and national identity” and “preventing violations of social values and standards.”

Although Cyber Police are now responsible for handling cyber crimes, this has not stopped the Revolutionary Guards from conducting its own operations, and from arresting people who posted jokes about Ayatollah Khomeini to Operation Spider. Now we have Operation Spider 2, and there can be little doubt that other spiders are crawling the Internet, waiting to save Iranians from their own follies.