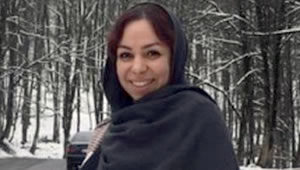 Journalist Tahereh Riahi was released on bail from prison on June 24, according to the Center for Human Rights in Iran.

Riahi, a reformist journalist who had worked for President Hassan Rouhani’s 2013 election campaign, was arrested on December 27, 2016. She was charged with propaganda against the regime,” “spreading lies” and “connections with the enemy media.”

Tahereh Riahi is the social affairs editor of Borna News Agency, affiliated with Iran’s Ministry of Sport. She has also worked for well-known reformist newspaper Shargh. In February, reports emerged that she had suffered a serious injury to her left eye, and that there were concerns she could lose sight in the eye. An anonymous source told IranWire that another prisoner in Evin overheard Riahi accusing one of her interrogators of damaging her eye.

Accused of “propaganda against the state,” Taheri was held in solitary confinement in Evin Prison’s Ward 209 and later Ward 240 during her five-month detention. She posted bail at 300 million tomans ($92,500 USD).

The source IranWire spoke with said Taheri’s family had been under immense pressure not to speak to the media.

It has been reported that the court had set a bail of 300 million tomans, close to $93,000, for Tahereh Riahi’s release. There is no update on the condition of her eye.

Moafi, who also posted bail at 300 million tomans, is a civil rights activist. Intelligence Ministry agents arrested her on January 25, 2017, and accused her of “propaganda against the state.”

Asal Esmailzadeh, a photojournalist with links to Rouhani’s media team, was arrested on June 19.