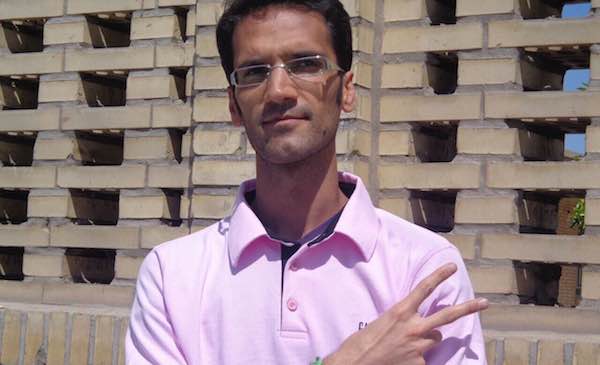 After serving more than five years in Evin Prison in Iran, human rights activist Mehdi Khodaei has been released on Sunday July 5th, 2015.

Having reported on human rights violations in Iran, Khodaei was arrested twice, in 2007 and 2010. In two separate cases on charges of activities against national security and propaganda against the regime, he was sentenced to a total of 7 years in prison.

Khodaei was detained in Evin Prison since March 2, 2010, but due to the implementation of Article 134 of Iran’s new Islamic Penal Code he has been released early. The Article 134 requires convicts with multiple charges to be released after having served their longest sentence.

Mehdi Khodaei was an electrical engineering student and an active board member of Human Rights Activists in Iran (HRAI). He was first arrested in July 2007. He was tried without a lawyer present at Branch 15 of the Revolutionary Court presided by Judge Abolghasem Salavati, who on February 24, 2010 sentenced Khodaei to four years in prison.

On March 2, 2010, whilst Khodaei was waiting to be summoned to prison for his first arrest, agents working for the Revolutionary Guards rearrested him. He then spent many days in solitary confinement during which he was harshly interrogated and pressured into giving a televised confession. In the second instance, Khodaei was tried at Branch 28 of the Revolutionary Court presided by Judge Moghisei and in the October 2010, he was sentenced to three years in prison.

Read more about Mehdi Khodaei on his profile.