Censorship and Self-Censorship During the Protests 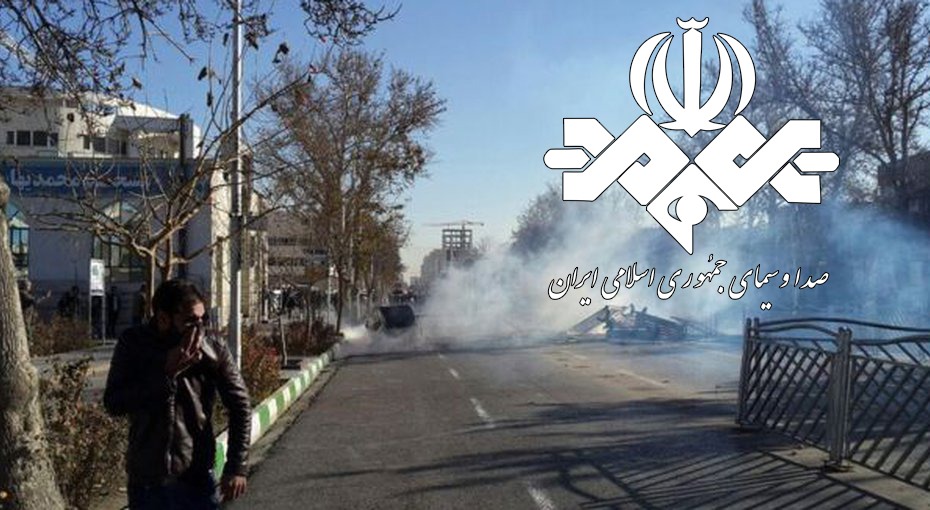 As protests and demonstrations in many cities across Iran reached the end of their third day on Saturday, December 30, Iran’s domestic media covered the news in a general, non-specific way, giving outlines of what had occurred and avoiding details, especially when it came to protest chants. News agencies also tended to avoid reports about outbreaks of violence between protesters and the police.

Most conservative media reported that the public protests had been about economic issues. They attacked the United States for supporting the protests and accused the West and Saudi Arabia of being culpable. Reformist and pro-Rouhani media tried to cover the demonstrations in various cities through reports and interviews but they too avoided details, or reporting on slogans protesters shouted out, the casualties or the damage to property.

The Islamic Republic of Iran Broadcasting (IRIB), which has a monopoly on radio and TV in Iran, was completely silent about the events for the first two days of protests. But on the third day, Saturday, IRIB joined the conservative media in pointing a finger at the “counter-revolution” and to accuse the US of taking advantage of people’s worries over the economy. In response to criticisms about IRIB’s silence, an informed source conceded that censorship had prevented them from reporting the protests. “Directives to IRIB by responsible authorities” was the cause of silence, he said.

A reporter who works for one official Iranian news agency told Journalism Is Not a Crime that in the first two days of protests, the editor of the agency’s political desk banned the publication of any news about events. “He said the president of the news agency had emphasized that we must hold off from publishing the news,” he says. He had covered many labor protests and rallies before and he had been busy preparing a report about the protests when he and others were told that news would not be published or broadcast.

“I think the decision was made outside the agency and the president of the agency was told to follow it,” the source said. “Usually at sensitive times they quickly contact news agencies and tell them what to do. We witnessed this repeatedly in 2009. They are much more sensitive about news agencies than toward other media because news agencies are the primary and the original source of the news.”

A journalist who works for a reformist newspaper told Journalism Is Not a Crime that the managing editor ordered them not to report any details and only cover what the authorities said. “But,” he says, “since the officials had not said anything up to that moment, we were unable to report anything. In the following days we only reported, in general, that there have been rallies in various cities. We were not even permitted to report that anti-government slogans had been chanted. I believe that the censorship was not imposed from outside but it was the managing editor who was [practicing] self-censorship and was afraid of the consequences if we published the news.”

He said that on the third day a number of reformist media cautiously handled the news and their managing editors allowed them to publish some reports and interviews.

It is perhaps accurate to say that in the first two days of the protests, the media were silent because they were confused. Friday is the first day of the weekend in Iran and the papers were able to use that day to come up with something for their Saturday issues and could blame the weekend for their silence. However, after that day, the news agencies were not use the same excuse again.

On the second day of protests, Iran’s principlist conservative media gradually started discussing events from their own perspective, and the reformist media cautiously followed suit on social networks by quoting the principlist media.

In the absence or near-absence of coverage by official Iranian media, Telegram and Telegram channels took over. One of the most active channels was Amad News, which had become one of the main sources of news and published photographs of the unrest and calls to protest. On the third day, without directly naming Amad News, Mohammad-Javad Azari Jahromi, Iran’s Minister of Information and Communications Technology, tweeted a request to Telegram to shut down the channel. “A Telegram channel is encouraging hateful conduct, use of Molotov cocktails, armed uprising, and social unrest,” he wrote. “NOW is the time to stop such encouragements via Telegram.”

Apparently, the channel not only had encouraged the protesters to use Molotov cocktails but it had also shared a video of a man threatening government officials and agents with armed action.

“Calls for violence are prohibited by the Telegram rules,” tweeted Telegram’s CEO Pavel Durov in response to the minister. “If confirmed, we'll have to block such a channel, regardless of its size and political affiliation.”

Following this exchange, on Saturday evening, this Telegram channel, which has a following of one and a half million, was blocked. When the users tried to sign on to the channel they received a message saying that the channel was no longer available. “A Telegram channel (amadnews) started to instruct their subscribers to use Molotov cocktails against police and got suspended due to our ‘no calls for violence’ rule,” tweeted Pavel Durov. “Be careful – there are lines one shouldn't cross.”

The Message from Edward Snowden

Telegram’s decision drew criticism from Iranians and others, including free internet advocates, as the Washington Post reported. Edward Snowden, the former National Security Agency contractor who exposed US government surveillance programs in 2013, said Telegram should instead be working on how to make the service accessible after a potential government ban. “Telegram will face increasing pressure over time to collaborate with the Iranian government’s demands for this or that,” tweeted Snowden. He added: “You can’t keep an independent, destabilizing service from being blocked in authoritarian regimes, you can only delay it.”

On Sunday, it appeared that Durov had retreated somewhat under the pressure of criticisms and presented Iran as being responsible for blocking the channel. In a tweet, he stated that Iran had blocked the app “for the majority of Iranians after our public refusal to shut down ... peacefully protesting channels.”

In the latest development, according to ABC News, Iran's state TV news website quoted an anonymous source saying that social media in Iran would be temporarily limited as a safety measure. "With a decision by the Supreme National Security Council, activities of Telegram and Instagram are temporarily limited," the report said, without elaborating further.