Controversial Journalist Denies All Charges Against Him 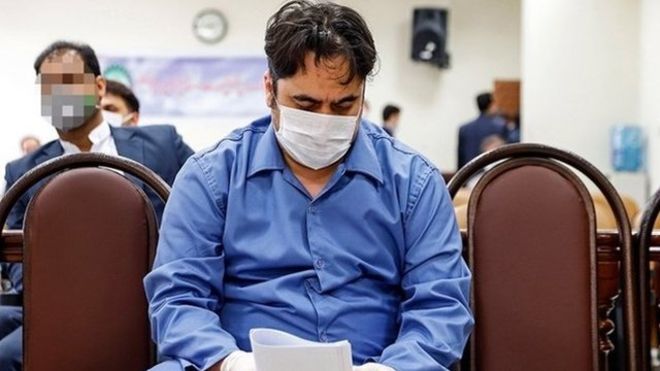 Ruhollah Zam, a controversial figure who ran the Amad News website and Telegram channel before Revolutionary Guards arrested him in October 2019, has denied all allegations against him, including acting against national security, causing “corruption on earth” and extensive financial criminal activity.

The May 4 court proceeding was the fourth in a series of hearings and took place at Branch 15 of the Revolutionary Court, presided over by Judge Abolghasem Salavati, who regularly rules on trials against journalists. Previous hearings took place on February 10, 16 and 24. In total, Zam faces 17 charges.

Media published photographs of Ruhollah Zam in court wearing a protective mask. The judiciary had previously stated that it would postpone the hearings until Iran’s coronavirus crisis eased, but then changed tack and brought Zam to trial in the presence of court officials and judges.

Reporting on the hearing, the Iranian Students' News Agency (ISNA) said the prosecutor’s representative repeatedly accused Ruhollah Zam of having links with spying operations and claimed he was not a journalist. Among the “spies” he was said to have links with were US Congressman Saghar Kasraie, former political prisoner Amir Abbas Fakhravar and Reza Pahlavi, the former Iranian crown prince prior to the 1979 revolution. The three were part of a foreign counter intelligence operation against the Islamic Republic, the court heard.

Zam responded by reiterating that he was a journalist and broadcaster at the time of his arrest, and that his activities had been in keeping with his job as a media worker.  When the official asked him to respond to the accusation of acting against national and international security, he replied, "No, I was doing a press job."

The prosecutor's representative, whose name has not been released, asked Zam why he had been in contact with Saghar Kasraie.

"You were not with the media because the media does not communicate with foreign intelligence services and does not message the person in US Congress in charge of running operations to overthrow the regime," the prosecutor's representative told him.

According to ISNA, Zam stated that Abbas Fakhravar had introduced him to Kasraie and that he had talked to her about securing a budget for Amad News.

When the Revolutionary Guards announced the arrest of Ruhollah Zam on October 14, 2019, some Iranian officials described it as a victory over “foreign enemies.” The Guards Corps described Zam as a dissident journalist who headed up the “counter-revolutionary and hostile Amad News network.”

Prior to his arrest, Zam was based in France. Zam’s wife told Journalism is Not A Crime's sister site IranWire that her husband had been kidnapped while in Iraq.

Shortly after his arrest was announced, state television showed footage of Zam confessing to his guilt while blindfolded. In the clip, Zam apologized for what he had done, and said that it was not advisable to “trust other states” — all of which could indicate he had been forced to confess, and possibly under torture.

In the May 4 hearing, Zam denied charges of "widespread misconduct in creating, destroying, and disrupting the economic order” — charges that suggest he was engaged in massive financial dealings that could help destabilize Iran’s economy.

Both charges of "corruption on earth" and "collaborating with hostile states" are punishable by death. Zam has always maintained his innocence, and has denied all allegations against him, including objecting during his pre-trial hearing that he played a role in the protests of late December 2017 and early January 2018. At the time, Amad News was credited with reporting on the protests, and Iranian authorities had even accused the Amad News Telegram channel of inciting violence.

Reporters Without Borders has warned of the possibility of Iran executing Zam, and described his arrest and trial unjust.

The date of Zam’s next court hearing has so far not been released.