Iranian Journalists and Activists Forced to Repent on Twitter 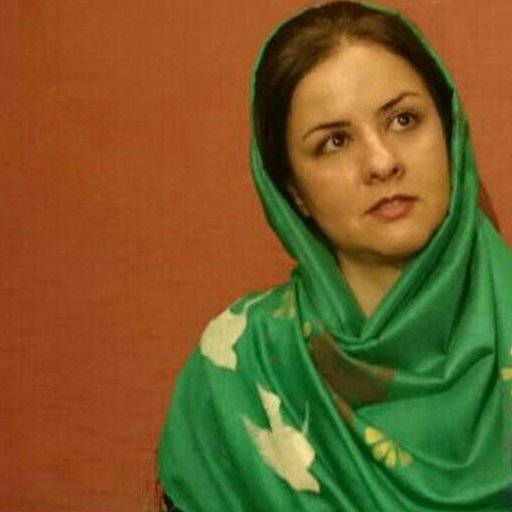 Over the last few days the Islamic Republic’s security agencies have launched a fresh campaign of intimidation and pressure against environmental activists, writers and activists on social media, including journalist Mojgan Jamshidi, pictured. “The Revolutionary Guards’ Intelligence Unit has summoned and threatened activists and journalists who have posted statements of support for environmental activists and in protest against harsh sentences against them,” one informed source said.

These individuals, the source says, have been summoned to safe houses and Revolutionary Guards interrogators have informed them that if they do not support verdicts issued by Iranian courts they will be arrested on the charge of “activities against national security.” According to the source, they were asked to post “letters of repentance” on social media.

This claim was confirmed in a tweet by journalist and environmental activist Mojgan Jamshidi on June 14. “I live in this country and I obey its laws,” she wrote. “If, after the verdict by the court [against] environmentalists was issued in November 2019, I tweeted or retweeted something that created the wrong impression that I do not respect the court’s verdict, I correct this by saying that I respect the court’s verdict.”

After reading this tweet, people voiced their suspicions that Jamshidi must have written it under pressure. One person on Twitter commented on the “correction” by quoting a well-known joke: “One day an activist told his spouse, ‘if I am arrested and write you a letter from prison in red saying everything is very good it will mean that things are bad.’ Sometime later his wife received a letter that said, ‘Hello. I am doing well and everything is good. The only problem is that I have no red ballpoint pen!” Others who commented on Jamshidi’s tweet also mentioned the red ballpoint pen.

Mojgan Jamshidi has been a fierce critic of the arrests of eight environmentalists and has frequently written about their innocence on social media. In February, after an appeals court upheld the combined prison sentences of 58 years for the activists, she tweeted: “The appeals court upheld the sentence of 58 years in prison for the environmental activists without giving them a chance to defend themselves! Two years after being arrested and charged with corruption on earth and espionage, they are now charged with cooperating with enemy states. This is how they are paid for two decades of trying to protect the environmental diversity of their motherland.”

Now, however, it appears that Jamshidi has been forced by security agencies to retract her earlier statements.

It is not quite clear why the Revolutionary Guards’ Intelligence Unit has chosen now to launch its pressure campaign. “It looks as if the pressure came after the video by Brian Hook about Morad Tahbaz,” a source said.

On June 8, the US State Department posted a video on Twitter in which Brian Hook, the US Special Representative for Iran, asked the Islamic Republic to release Morad Tahbaz as soon as possible. In the video, Brian Hook refers to Tahbaz as a well-known environmental activist who has been imprisoned in Iran for trying to save endangered species. Hook also reminded the Islamic Republic that Tahbaz and his colleagues had permits from Iran’s own Environmental Protection Agency for their activities and they had been praised by the United Nations Development Program for their efforts. He asked all human rights activists to condemn the verdict against Tahbaz and his colleagues and to demand his immediate release.

Morad Tahbaz, an Iranian-American conservationist, has been sentenced to 10 years in prison. He was arrested in January 2018 along with Niloufar Bayani, Hooman Jokar, Sam Rajabi, Taher Ghadirian, Sepideh Kashani, Amir Hossein Khaleghi and Abdolreza Kouhpayeh. All eight are environmental activists but the judiciary ordered them to be arrested on charges of spying, despite the fact that both the Intelligence Ministry and the head of Iran’s Environmental Protection Agency rejected this charge.

They were detained at Evin Prison for two years, were not granted a leave of absence for even a day, and denied the rightto choose their own lawyers. Their trial was conducted in secret. In February, the appeals court upheld a total of 58 years of prison sentences against them.

Kavous Seyed-Emami, another arrested environmentalist who was also a notable Iranian sociologist and university professor, died in Evin prison less than a month after he was arrested. The authorities claimed that he had committed suicide but his family and close friends have always rejected the claim.

Punished for Other People’s Offences

Security agencies have not limited their intimidation tactics to these journalists and activists, however. Over the last few days, the Instagram posts of some writers and translators have also come under scrutiny. “Security agents for the Ministry of Culture and Islamic Guidance, who mostly belong to the Revolutionary Guards, have summoned a number of writers and questioned them about comments on their Instagram posts,” a source informed IranWire, Journalism is Not a Crime's sister site. “They were told that if any of the comments that others leave on their posts are against the interests of the public and the regime and are punishable by law, they would be punished…Shahla Zarlaki and Bijan Ashtari are two of those who have been warned by the Ministry of Culture.”

Recent changes recently made on the Instagram accounts of Shahla Zarlaki, a well-known writer and literary critic, and Bijan Ashtari, a translator, can confirm this account.

“My dear Instagram friends,” Ashtari writes in his latest post. “For your information I must note that I have decided to be less active on my page for a while. The reason being that some of my followers interpret my posts in a wrong way and, in their comments, they brazenly include slogans and sometimes insult officials and institutions that, under the law, is a crime and is punishable. Many times I have pleaded with them to stop this and, if they have comments, write them without insults and offensive remarks. But, unfortunately, my efforts have proved useless and these people have continued their wrongdoing. The problem has become much worse in recent days and the number of comments have greatly increased. I really do not have the ability to check hundreds of comments during the day because I have other things that I must attend to. And I do not believe that turning off comments is the right thing to do because my goal for this page is dialogue and exchange of ideas and views. In any case, since under the current laws of the country where I live, I am responsible for comments on my page and I do not wish to make legal troubles for myself and for others, I have decided to reduce my account activities, even for a limited time, or perhaps close the page forever. I shall miss you but, really, I have no choice.” Ashtari has more than 27,000 followers on Instagram.

Shahla Zarlaki, whose books include Women, Menstruation and the Monthly Madness and On Women’s Services and Disservices, has 21,500 followers on Instagram, where she had regularly posted about women’s issues and her private life. As of now she has blocked all comments and removed any photographs of herself where she is not wearing hijab.

“I was not summoned but I was warned through an intermediary that comments posted by my readers would get me into trouble,” another writer who asked to remain anonymous said. “They also warned that I should be careful about my comments on social media because it would get me in trouble when I need to get permits [from the Ministry of Culture] to publish [my works].”

The writer IranWire spoke with said the people who had blocked comments on their social media pages were right to do so. “There have been instances where people have been arrested because of comments that others had left on their posts,” he said. “So this warning is not a joke. If you remember, one of those who was sentenced to prison because of Facebook comments was actually one of the [regime’s] insiders.”

He was referring to Abdolreza Davari, who was a deputy director of the Islamic Republic News Agency (IRNA) and a media advisor to former president Mahmoud Ahmadinejad. He told an interviewer that he was charged with “insulting the Supreme Leader” and “propaganda against the regime” and was sentenced to three years in prison because of comments by other people on his Facebook page. “They did not listen to me no matter how much I explained that I could not control the comments, that various people can leave anonymous comments on Facebook, that I have always tried to make my posts conform to the law.”

The source IranWire spoke with said that in recent days those who had expressed their condolences after the death of Marjan, a singer who died on June 6, have also been threatened. They have been told: “you have expressed your condolences for a member of the [opposition] People’s Mojahedin Organization and you must expect the consequences.”

Actor and artist Bijan Banafshekhah and actress Hanieh Tavassoli were among those who had done so. Then they both posted their disgust toward the People’s Mojahedin Organization, which had published their names on its newspaper. “I did not know that Ms. Marjan was a supporter of the Mojahedin,” Bijan Banafshekhah on wrote on Instagram. “I had only posted a 15-second video of the songs she had sung 50 years ago, without an emoji and without a comment. Now this hated extremist group has exploited my story and I am sorry. Not only can you not find anybody in Iran who supports this group, but everybody hates them. I hate them as much as you do.”

Over the last few months, many journalists, lawyers and social and political activists have been summoned, threatened and arrested for their posts on social media. A journalist who writes about politics for a government-owned newspaper told IranWire that he and his colleagues have been repeatedly called in by the paper’s directors and warned about their tweets and Instagram posts. “Writing about the shooting down of the Ukrainian plane by the Revolutionary Guards’ missiles or the killing of November 2019 protesters has led to summons by the security agencies,” he said. “Even posts about coronavirus has led to trouble for journalists.”

“The inflamed political landscape has led to increased pressure on journalists and social media activists,” the journalist added. “People are disappointed by economic problems, by the November 2019 protests, by the downing of the Ukrainian passenger plane, by the coronavirus outbreak and by the inept government response to these events. The government knows well that people might run out of patience at any moment, so it uses all its might to pressure and suppress.”