One Year After His Abduction, a Dissident Journalist's Life Hangs in the Balance 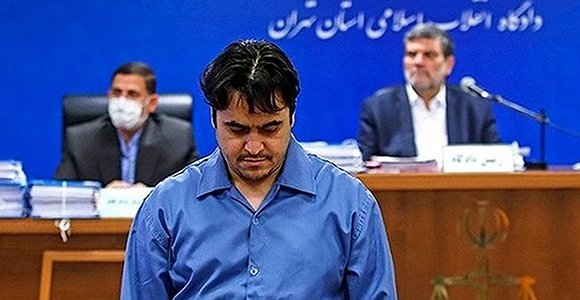 One year ago to the day yesterday, on October 13, 2019, news broke about the arrest of Ruhollah Zam, founder of the dissident channel Amad News. The detention made headlines in Iran and across the world. It later transpired that Zam, who had been living in exile in France, had ended up back in Iran after apparently being abducted during a visit to Baghdad.

Since then the journalist has been sentenced to death in the Islamic Republic and is still being held at an unknown facility belonging to the Revolutionary Guards’ Intelligence Organization. Just under a month ago on September 15, Mortazavi Moghadam, head of the Supreme Court, announced that Zam’s case had been considered by the Supreme Court and a final verdict had yet to be issued.

The media activist’s life hangs in the balance. Amid the one-year anniversary of Zam’s kidnapping, social media users have sought to highlight the case and call for his unconditional release using the hashtags #Ruhollah_Zam and #Save_Zams_Life.

One Twitter user wrote: “Zam is an Iranian journalist kidnapped by the IRGC in Iraq for exposing corruption of [the] IRI regime. He has been sentenced to death & will likely be executed imminently and in complete silence. We need to raise awareness about him before it is too late.”

What Happened to Ruhollah Zam?

Ruhollah Zam was detained in Baghdad last October by agents of the Revolutionary Guards. He was then brought to Iran and on October 13, 2019, the IRGC issued a press statement confirming the arrest.

The case against Zam was heard in Branch 15 of the Revolutionary Court, presided over by Judge Abolghasem Salavati, across six separate hearings in February and March 2020. Zam was charged with a litany of alleged crimes in connection with his oversight of the website and Telegram channel Amad News. They included "corruption on earth”, spying for the Israeli and French intelligence services, collaborating with the US government against Iran, “conspiring against national security”, engaging in “propaganda activities” against the Islamic Republic of Iran, “inciting people to war”, “spreading lies” and “insulting the Supreme Leader”, as well as the acquisition of “illegal income” totaling 97,500 euros.

On June 30, 2020, Iranian judiciary spokesman Gholamhossein Esmaili confirmed that Ruhollah Zam had been sentenced to death. Zam immediately appealed the verdict and eventually in mid-September, Mortazavi Moghaddam confirmed that the Supreme Court had completed its investigation into the case. It is not yet clear when the judiciary plans to announce the outcome.

What is clear, however, is that Ruhollah Zam has spent a year under pressure from interrogators and was forced to “confess” on state television. Now, wherever he is, he will be suffering from the additional psychological pressure of a death sentence. A source close to Amad News told HRANA on Monday, October 12: "Despite the closure of the investigation, Mr. Zam is still deprived of regular contact with his family. The state of his health is unclear due to these security constraints.”

Shortly after Zam's first court hearing, Reporters Without Borders issued a statement warning of the risk of execution. The statement called his trial "unfair" and described Judge Salavati as a known "executioner" of journalists and bloggers.

The organization also pointed out that there had been “no sign of a defense lawyer”, and quoted one of Zam's relatives as saying that the authorities told him “not to make things worse for yourself” by asking for one. It later transpired that Zam’s judiciary-appointed lawyer was Dabir Daryabeigi, who has links with both the judiciary and Judge Salavati and has been accused of deliberately bungling his defense of past clients.

On July 1, 2020, the day after his son’s death sentence was announced, Mohammad Ali Zam addressed a note on his Instagram page to Ebrahim Raeesi, the head of Iran’s judiciary. "The lawyer of the accused,” he wrote, “is a public defender: that is, a lawyer determined by the court. The accused and his family, although they are a party to the case, have no means to fully and comprehensively defend their reputation and the possibly unjust accusations against them… What will happen to the violated rights of Ruhollah, who has been sentenced to death?"