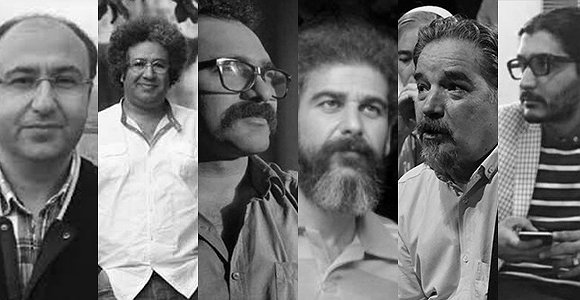 Over the past year, at least six members of the Iranian Writers' Association have been arrested, convicted, or sent to prison to serve their sentences, showing the increasing pressure on writers in Iran. However, the Writers' Association of Iran continues to oppose repression and restrictions within the limits of what is left of its power.

Since December 21, 2020, Arash Ganji, Amin Moradi, Baktash Abtin, Reza Khandan Mahabadi, Keyvan Bajan and Alireza Nouri are among the members of the Writers' Association who have either been arrested, are facing legal action, or summonses to serve their jail terms even as the Covid-19 epidemic is claiming hundreds of Iranians every day.

And since January 19, 2021, two members of the Writers' Association already in Evin Prison have been prevented from being sent from prison to hospital to be treated for ill health.

"The Writers' Association of Iran is the oldest civil society organization and, at the same time, banned in Iran, both in the past and the present," Reza Moeini, head of the Reporters Without Borders Iran desk, told Journalism Is Not A Crime. "This organization has always been attacked by governments [before and after the 1979 Revolution], but after the Islamic Revolution and from the beginning of the Islamic Republic, it was attacked more severely. Since then, not only have we witnessed harassment, arrest and imprisonment of its members, but we have also witnessed the murder and execution of some of them. From Saeed Sultanpour, who was executed, to Mohammad Jafar Pouyandeh and Mohammad Mokhtari, who were killed, to other members who were targeted by failed assassination attempts, to the many members of the association who were forced into voluntary exile."

Moeini said eight members of the Writers' Association are currently involved in legal cases, adding that: "These show the suppression of freedom of expression and indicate that Iran's oldest civilian institution is still being trampled underfoot by the regime."

Alireza Nouri, a writer, poet and member of the Writers' Association, was arrested at his home by Hamadan Intelligence and Security Police last week, on February 11, and transferred to Hamadan Prison to serve a two-year prison sentence.

According to the Human Rights Activists News Agency, Nouri was tried in June 2017 in Branch 104 of the Criminal Court of Hamadan on charges of "insulting sanctity,” and was later sentenced to two years in prison. The evidence for his accusation was his poems, which the court called "insulting poems in cyberspace.”

Nouri appealed the sentence but it was confirmed in November 2017. Two and a half years later he was summoned to the Branch 5 of the Hamadan Verdict Enforcement Office, on June 22, 2020, to serve his sentence. But he was then told its implementation was delayed due to the coronavirus outbreak.

A few months later, even as the epidemic continued in Iran, Nouri was transferred to prison to serve his sentence without prior notice.

Arash Ganji, a writer, translator and secretary of the board of directors of the Writers' Association, was meanwhile sentenced to 11 years in prison by the Revolutionary Court for translating a book.

He was arrested on December 22, 2019 by security forces and transferred to Ward 209, under the control of the Ministry of Intelligence, in Evin Prison. Oon January 19, 2020, he was released on a 450 million toman bail. After several court hearings in Branch 28 of the Revolutionary Court, Ganji was sentenced to 11 years in prison on charges of "conspiracy to act against national security," "propaganda against the regime," and "membership and cooperation with an anti-regime group."

His lawyer, Nasser Zarafshan, said in the news that the charges against Ganji were for translating a book called Little Keys, Big Gates. The book deals with the developments in Syrian Kurdistan. Ganji is now awaiting the court’s final verdict.

Amin Moradi, a poet and another member of the Writers' Association, was arrested at his home on November 28, 2020 and sent to Evin Prison. After 10 days, he was released on a bail of 500 million tomans, on December 7, 2020. The reason for his arrest has not yet been reported in the media, but there are concerns about his re-arrest or sentencing.

Baktash Abtin, Reza Khandan Mahabadi, and Keyvan Bajan, all of whom were convicted in a joint case on two counts of "acting against national security" and "propaganda activities against the regime," were transferred to Evin Prison on October 11, 2020, to serve their sentences. Friends and members of the Writers' Association accompanied them to the front of Evin Prison to protest the sentence.

The Writers’ Association has said that Reza Khandan Mahabadi and Keyvan Bajan need medical treatment. But they were prevented from being taken to hospital because the prison authorities rejected their request to wear their own clothing instead of prison uniforms to hospital.

In 1994, the text of "We are Writers", which later became known as the "Text of the 134,” led to arrests, failed assassination plots and subsequent murders. In the text, 134 writers, critics, translators, and poets called for freedom of speech and protested against government censorship. But the letter led to an infamous attack on a bus in Armenia, August 6, 1996, at the order of the Ministry of Intelligence. The bus was carrying 20 prominent Iranian religious and cultural figures and was meant to fall off a cliff – though the plot failed.

Over the past three decades, the arrests and detention of members of the Writers' Association, including Faraj Sarkouhi, a journalist, have continued, with at least four members still in prison and two others awaiting sentencing or confirmation.

Many members of the association have chosen to leave Iran due to the intensity of the pressure they have faced.