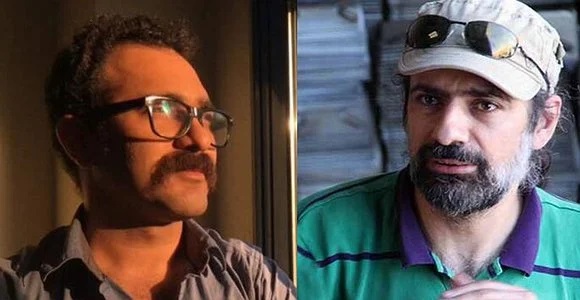 The guilty verdicts that were issued in the cases of Arash Ganji, a translator and secretary of the board of directors of the Writers' Association of Iran, and Navid Mihandoust, a screenwriter and director, were both upheld by Branch 36 of the Court of Appeals on February 27. Ganji has been sentenced to 11 years in prison and Mihandoust to three.

The Writers' Association of Iran issued a statement on the same day, calling the issuance and approval of these sentences "baseless” and stating that Ganji had been sentenced purely for translating a book. Neda Mihandoust also announced on her Twitter account that her brother’s sentence had been upheld in the Court of Appeal.

Translator of Book on Syrian Kurds

The Writers' Association of Iran announced on February 27 that the Court of Appeal had informed Arash Ganji’s lawyers, Nasser Zarafshan and Razieh Zaidi, that his 11-year prison sentence had been upheld.

Ganji was arrested on December 22, 2019 by Ministry of Intelligence agents and transferred to solitary confinement in Evin Prison’s Cell Block 209. He was released on January 19, 2020 on a bail of 450 million tomans (US$17,600) until the end of the trial. His first court hearing was held on June 14, 2020, presided over by Judge Mohammad Moghiseh, but after the trial ended the judge ordered his arrest. Ganji was released again six days later.

Almost a year after Ganji’s first arrest, the court announced his 11-year prison sentence to his lawyer, Zarafshan, on December 29, 2020. The lawyer then appealed the verdict, and everyone hoped it would be overturned in the Court of Appeals.

Ganji was sentenced to five years in prison on charges of "conspiracy to act against national security", five years for "membership and cooperation with an anti-regime group", and five years on charges of "propaganda against the regime", with a total of 11 years to serve in prison.

The Writers' Association issued a statement saying that these three charges were brought against Ganji purely because he had translated the book A Small Key Can Open a Large Door: The Rojava Revolution: a collection of articles by different authors about Kurds in the Syrian civil war. Ganji also translated Sunset of the Gods on the New World Order and The Struggle over the Way of Thinking in the Working Class Movement.

Three members of the association’s board of directors, Reza Khandan Mahabadi, Baktash Abtin and Keyvan Bajan, are also serving between three and six years in Evin Prison on security charges in Evin Prison. Last month it was announced that Bajan and Khandan Mahabadi had not even been transferred from prison to hospital for treatment.

Neda Mihandoust told Journalism is Not a Crime that although her brother's lawyer had appealed the verdict, the session was held without Navid and his lawyer present. "Navid and I were very hopeful that the sentence would be quashed in the court of appeal. Navid was ready to defend himself. However, the trial was held without their knowledge and the verdict was announced.

"We now hope that the House of Cinema and its partners will continue their efforts at least to prevent the execution of the sentence." Neda, who lives in Canada, added: "Navid is the only son in our family, and my parents are very old and have all their hopes pinned on him. The confirmation of this sentence is very upsetting."

According to the filmmaker’s sister, neither he nor his lawyer had a chance to defend themselves in the Revolutionary Court. "The trial was very short and several other defendants appeared on the same day on different charges. The judge held a few minutes’ trial for him and he had virtually no time to defend himself. The judge also asked the lawyer to submit his defense in writing to the court.”

As yet the Iranian film and television community has not reacted to the arrest of Mihandoust and his colleague. On her Twitter account on February 27 his sister said his sentence was final and asked filmmakers not to remain silent in the face of it.

Asked if her brother was politically active in addition to his professional activities, Neda Mihandoust said, "Navid has never been politically active. According to the court, one of the charges, for which he must serve three years in prison, is making a film about Masih Alinejad [a female journalist and women’s rights activist who now lives in New York]. The film was made in 2009 in Iran at a time when Masih had legally travelled to Iran. After his arrest the agents also confiscated some of Navid's personal belongings, including the documentary about Alinejad.”

Navid was arrested for the first time on November 19, 2019 in the Tehran Book Garden and was released after several hours of interrogation. But on December 4 he was again summoned to the Ministry of Intelligence for further explanations, and was arrested on attending. After his arrest he was transferred to Evin Prison’s Cell Block 209, and finally released on bail on February 3, 2020.

Since his trial Navid has not been able to continue his professional activities. Neda says he has not been told publicly or in writing that he is unable to continue working in film production or television, but "the atmosphere is such that if a person is charged, he or she is usually not commissioned to work any more. In cinema and television he has to negotiate with the producer, who also cuts off the work for various reasons when someone is facing a court order."