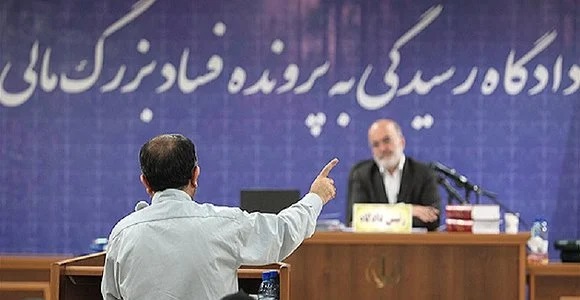 On June 13, 2021, a bill will go before the Iranian parliament’s Judicial Committee bearing the cumbersome title “Intensifying the punishment of collaborators with hostile countries to disrupt security and national interests."

Part of the bill includes specific mention of Iranian citizen journalists. According to Article 7 of the bill, Iranian citizens found to have sent videos or images to “hostile or foreign networks” can be sentenced to up to five years in prison.

Article 1 states that “espionage or cooperation with hostile states, including the United States" – interpreted as a threat to national security – is tantamount to "corruption on earth" and thus carries the death penalty.

Meanwhile MPs have pointed out that the bill also includes provisions to punish people who film or photograph “crimes that lead to death [sentences], such as executions or amputations” as well as " terrorist acts", with two to five years in prison.

The bill has caused outcry among Iranians on social media. It has also given rise to questions as to how pre-existing Iranian law is interpreted. On what basis is sharing pictures of Iran with foreigners a threat to national security? If this is a new law, on what basis were people who did this being jailed in their hundreds before. And what exactly does sharing pictures and videos of the reality of life in Iran have to do with “corruption on earth”?

Lawyers: The Islamic Republic is Afraid of the World’s Heightened Awareness

Shirin Ebadi, a lawyer and Nobel Peace Prize winner, told Journalism is Not a Crime that the bill is compelled by the Islamic Republic's fear of "the truth spreading", leading to its "further disgrace in the world”.

Ms. Ebadi emphasized the importance of citizen journalists’ work in an environment that stifles professional media activity. "When news of the execution or amputation of an Iranian citizen is published,” she said, “it doesn’t shock the international community as much as a photo or video of this crime.

“Freelance journalists or citizen journalists, aware of a tragedy or a crime, try to be helpful by sending out videos and photos alerting the world's conscience to oppressive laws. This has led to a recent increase in the number of citizens arrested for reflecting the realities of society.

“These actions by the court and the security institutions do not comply with any law. They have falsely attributed different accusations [to citizen journalists]. By passing this law, they want to make their work easier."

As it stands, Ebadi points out, there is no law in Iran that criminalizes the publication of videos and photos of real-world events. False charges of denigrating the regime, or acting against national security, were therefore used by judges to deter civilians instead.

“Showing what is happening in society is not denigrating,” Ebadi says, “but a statement of truth. Now this parliament, whose members were elected on the lowest number of votes in the 42-year history of the Islamic Republic, has taken action to eliminate this shortcoming and cover up the illegal behavior of the courts.

"Now anyone who wants to record the tyranny of the government – through such acts as executions and amputations, which contravene the basic principles of human rights –  and present it for the judgment of the world, is guilty. And according to this law, the judge can sentence that citizen to punishments such as flogging and imprisonment, or even execution!

“The death penalty and corporal punishment are prohibited under the [United Nations] Convention for the Suppression of Torture and Other Cruel, Inhuman or Degrading Treatment or Punishment. The Iranian government and ruling bodies are constantly committing human rights abuses, and now they seem to want to prevent these medieval acts from being recorded and exposed so they cannot be prosecuted in the international courts."

‘Omniscient’ Rulers vs a ‘Foolish’ Citizenry

“Those who have come up with this plan,” he said, “think that now they have become part of the power structure, even for just four years, they should somehow take ownership of the thoughts, lifestyle and lived existence of the people, and that citizens should be guided and live according to these MPs.

“They think people have no intellect and should act only according to their own thoughts. This is the principal reason behind the drafting of such bills. That said, I personally find it unlikely that this one will be approved or implemented, even in this extremist parliament, given the current state of society and the anger of the people."

Regarding the strategic and legal basis of the bill, Aghasi agrees that it aims to make life easier for Iran’s security agencies. “In the past, when they wanted to punish a citizen for sending videos and photos abroad, they were charged with ‘communicating with hostile states’ or ‘spreading lies’.

“We jurists have always held that talking to the media or posting a picture showing the reality of a society, without interfering in it, is definitely not a crime. If a fact is published that is ugly and defamatory to everyone, they should prevent the incident from happening again, not hide it and send the publisher to court.”

If the bill becomes legislation, he adds, “Judges must explain during sentencing exactly what act was considered a crime and what it has to do with the charge. They cannot convict anyone arbitrarily just because the act is ‘similar’ to a crime.

“In criminal law we follow the principle of ‘prohibition of extended interpretation’, which means the judge has no right to refer to an act similar to a crime as the reason for sentencing. All the verdicts that have been, and will be, issued to citizens for publishing images of real events are not in accordance with the law and come about for illegal, political reasons.”