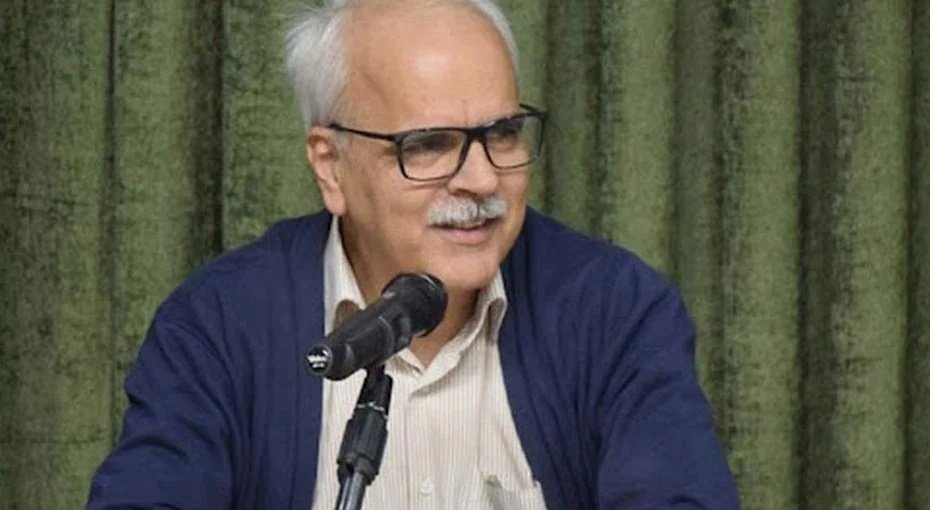 Saeed Madani, Iranian sociologist and journalist, learned this month that he had been barred from leaving the country. The IRGC blocked him at the airport from boarding a flight to Connecticut, ahead of a planned one-year sabbatical at Yale University.

The intervention came after he’d travelled freely to Armenia multiple times to obtain US visas. Madani was also subjected to hours of interrogation by the Ministry of Intelligence before being informed he was subject to a travel ban.

Madani is a prominent, long-established scholar and has previously been subjected to internal exile in Iran. His travel ban is unprecedented, though, and it has sent ripples of alarm through the Iranian academic community. IranWire spoke to Madani about what happened, and about his recently-published book on Covid-19 in Iran, which he believes was the main catalyst for the travel ban.

Who is Saeed Madani?

Saeed Madani is a civil society researcher and sociologist of social harms. Among his most important publications over the decades are Child Abuse in Iran, Violence Against Children in Iran, The Sociology of Prostitution, The Necessity of Combating Poverty and Inequality in Iran, and Addiction in Iran. He holds a doctorate in criminology and is a faculty member of the Social Welfare Research Group at Tehran’s University of Social Welfare and Rehabilitation Sciences. His books have been banned from dissemination in Iran for several years.

His academic CV aside, Madani is also a member of the now-banned Nationalist-Religious Alliance political opposition group. He was a close associate of nationalist politician Ezzatollah Sahabi, who served as an MP and political faction leader in the first Iranian parliament and later became managing editor of the weekly Iran-e Farda. Sahabi died in 2011, having survived 15 years in prison.

Madani himself was a co-founder of and contributor to Iran-e Farda in the 1990s. His editorial work saw him arrested twice, in 1994 and 2000, in successive crackdowns on nationalist agitators inside Iran. He was arrested again in 2011 after widespread pro-democracy protests over the disputed re-election of Mahmoud Ahmadinejad in 2009, and was ultimately sentenced in 2013 to six years in prison and 10 years in exile in Bandar Abbas, Hormozgan. In the end, he was permitted to return home in November 2017.

The latest measure taken against Saeed Madani by the security forces of the Islamic Republic has little precedent, and came as a shock. Madani was stopped at Imam Khomeini International Airport on January 5 and his passport was taken away from him. Now, he has been told, he is barred from leaving without a court order.

"I applied for a US visa after being invited to Yale," Madani told IranWire. “I went to Armenia twice for a visa. After it was issued, just a few days before the flight, the Ministry of Intelligence called me and asked me to present myself.

“I was asked about many different matters, but the important thing was I asked the officers if I was barred from leaving the country. The answer was no. I then asked if my collaboration with Yale University constituted a crime. Again, I received an answer in the negative. As such, I was sure it would not be a problem for me to travel.

"A few days later, I left for the airport at midnight. I picked up my boarding pass and checked in my luggage, and at passport control, I was told I’d have to wait a few minutes for them to check my visa. Then one of the airport security officers asked me a few questions about how I’d got the visa, the destination, and the reason for my trip. It was only a brief conversation."

Then, he said, a plainclothes officer approached. On being asked politely by Madani to identify himself, he announced that he was from the IRGC’s Intelligence Organization, though he had no court order, warrant or document to back up the intervention. "I was asked about my having criticized the management of Covid-19 [in Iran],” he told IranWire, “about some statements I’d signed, interview’s I’d given and some of my political and social activities."

Madani’s most recently-published book, Civil Society and the Coronavirus: A Global Experience, examines the role of civil society in different countries in managing the pandemic. Separately he has criticized the Iranian government’s Covid-19 record in several interviews, including Hamshahri Online and AFP.

"About a quarter of an hour before the flight,” he said, “I asked the plainclothes officer to clarify my situation. One phone call later, they informed me that I was not allowed to leave.

“I wanted them to show me the court order. But he referred me to the airport intelligence department of the airport. Airport security said that they were basically unaware of the matter and didn’t have any such order."

Madani points to his own, long record of independent thought as a possible reason for his sudden confinement. “I’ve gone through had three periods of detention, and three different cases were filed against me. All the accusations against me were due to a combination of being the editor of Iran-e Farda, membership of the Nationalist-Religious Alliance, and ‘collaboration’ with the Green Movement."

He is still uncertain why he was arrested in 2011, after which he was held in protracted solitary confinement on Ward 209 of Evin Prison, under the supervision of the Ministry of Intelligence – a form of torture over which he later signed a joint legal complaint by former prisoners in May 2021. In 2014 he took part in a now-infamous protest on Ward 350 that saw political prisoners viciously beaten and split up by guards, after which he was transferred to Karaj Central Prison before finally being deported to Bandar Abbas two years later.

The six years of incarceration did nothing to deter Madani from writing critically about the regime’s policies. “During the interview at the airport,” he said, “I was asked why I accused the regime of mismanaging the coronavirus pandemic. I replied that there was very clear evidence, from the beginning of the outbreak through to the next steps and vaccination – which, of course, was decided on at the highest levels of the Iranian governance system – that very serious errors have been committed."

Official figures state that more than 132,000 Iranians have died from Covid-19. Excess deaths recorded in the period indicate that due to low testing and under-reporting, the real number could be more than twice this. "The regime delayed the announcement of the virus’s arrival in Iran, and even lied about it,” Madani said. “This had serious consequences.”

Madani’s book also highlights such factors as the non-implementation of travel bans to and from the city of Qom, Rouhani’s early reliance on a disastrous “herd immunity” policy, limited and badly-planned quarantine measures, and major delays – largely because of an edict issued by Ayatollah Ali Khamenei – on obtaining Covid-19 vaccines, to explain why Iran was one of the worst-hit countries by Covid-19 in the Middle East.

The book was intended as a public-spirited contribution and is a continuation of Madani’s long track record of writing about whole-society ills in Iran. But, he says, it upset the regime: “What I said was a critique of the state of Iranian society. In these critiques I tried to explain the basic issues and structural obstacles that are hindering the Iranian society from development and prosperity."