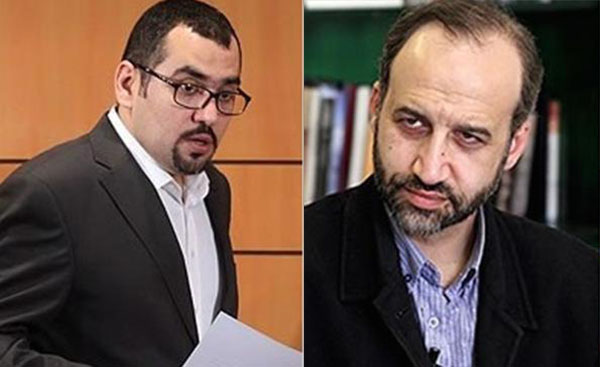 The European Court of Justice (ECJ) has rejected a complaint by Mohammad Sarafraz, the head of Islamic Republic of Iran Broadcasting (IRIB), and Hamid Reza Emadi, the senior editor at Press TV, IRIB’s international English-language channel, against the European Union’s decision to include them on its human rights sanctions list. The ECJ placed them on the list in 2013, after Press TV broadcast a series of forced confessions by detainees who had been tortured.

In July 2011, following a complaint by Maziar Bahari, journalist, filmmaker and the founder of Journalism Is Not A Crime and IranWire, the UK’s independent communications regulator Ofcom fined Press TV £100,000 after it broadcast the forced confessions of Bahari in prison following the disputed 2009 presidential election. According to Bahari’s testimony, Emadi interviewed the him during his detention in Evin Prison. He said that during the interview, Emadi and the interrogator, who was hiding behind a curtain so that Bahari could not see him, exchanged their opinions about the questions, and about Bahari’s answers.

Sarafraz and Emadi are among 87 Iranians that appear on the European human rights violators list. They are banned from traveling to Europe and their assets in the EU have been frozen.

Sarafraz and Emadi hired four Spanish lawyers to present them in the European court against the European Union’s lawyer. But the court also decided to allow representatives from the human rights organization Justice for Iran (JFI) attend the court. The hearing was held on May 5 this year. Shadi Sadr and Shadi Amin from JFI and the lawyer representing the organization participated in the court hearing  and presented evidence about Press TV’s violations of human rights through broadcasting confessions obtained under duress and torture.

Representatives for JFI were also present when the court issued its verdict on Wednesday, December 9. Journalism Is Not A Crime's sister website, IranWire, interviewed Shadi Sadr about the verdict and the events surrounding it.

Where do Sarafraz and Emadi stand now that the court has confirmed the validity of the decision by the European Union?

They cannot enter any member country of the European Union, not even for transit to other countries. Not only do their own assets and bank accounts in these countries — if they have any — remain frozen, but so do assets belonging to the organizations under their control. The lawyers presented extensive arguments on this point and it turned out that all the European bank accounts belonging to Press TV have been frozen.

Their lawyers argued that if the two individuals were held responsible then only their accounts should be frozen and, on the other hand, if Press TV was held responsible, then they should not be punished. But the court cited the decision of the European Union, which stipulates that if individuals violate human rights, not only their own assets, but also assets belonging to organizations under their control, must be frozen. Since Mohammad Sarafraz controls all Press TV accounts, then all those accounts were blocked.

Their lawyers told the court that these two had no personal responsibilities for the violations of human rights.

Their lawyers said that the two had nothing to do with forced confessions. For example, they said that as a director, Sarafraz was responsible for general policies and he had never interviewed prisoners himself, so he could not be held responsible.

The court’s argument for holding the two responsible was very interesting. First, according to laws governing the media, the director and the managing editor of a media outlet are responsible for its content. So if human rights are violated they are held accountable. So the decision by the EU to put them on its sanctions list was not unjustified.

The second argument by the court was that, regardless of whether the two have interviewed prisoners or not, the mere act of broadcasting the interviews counts as two cases of human rights violations. First, the audience had not been informed that the interview had taken place under duress and in prison — whereas the audience must know under what conditions the interview has been conducted. Second, the evidence presented — such as Ofcom’s decision about Maziar Bahari’s interview — show that these interviews had taken place under duress and had been recorded and broadcast without the consent of the interviewees. Other cases were similar to Bahari’s case. Therefore, these two are responsible.

The court also concluded that Iran broadcast the interviews even before the prisoners had been tried as a tactic to show both domestic and international public opinion that the arrests were justified. In the interviews, the defendants confess that they are guilty, and therefore the public opinion is persuaded to believe that they were arrested because they had been guilty as charged.

The court emphasized these specific points, although the full verdict is lengthy. In the verdict, a total of 215 paragraphs refer to Mohammad Sarafraz, and 205 paragraphs with Hamid Reza Emadi. It is interesting that the two were very adamant about their own human rights. Their lawyers argued that the two men’s human rights had been violated because they cannot travel freely in Europe or through Europe. They argued that their right to carry out their jobs had been put at risk because they cannot work freely in Europe, and that the EU issued its verdict before the two could present their defense. They raised many instances where their own human rights had been violated, but the court argued against each and every one and declared the sanctions to be justified within the legal framework that allows EU to impose sanctions.

Did the court say anything about Mohammad Sarafraz’s specific responsibilities?

Yes, but only as part of a chronology. For example, they said that until a certain date Sarafraz was the director of Press TV — after which the Supreme Leader promoted him to the head of the IRIB. But the case was specifically about 2013, when the European Union placed these two on its sanctions list. At the time, Mohammad Sarafraz was IRIB’s deputy for foreign operations and the head of Press TV. In any case, this was presented in court only as a chronology and his change in position played no role in the court’s verdict.

What role did Justice for Iran played in the court?

We were there as a third party. A court case usually has two parties: The plaintiff and the defendant. But sometimes an organization or a group argues that it has an interest in the case and wants to participate as the third party even though it is neither the plaintiff nor the defendant. We told the court: “Because of our research work and because of our relations with the prisoners and their families, we are an interested party. We believe it is important that these two individuals remain on the sanctions list and the families of the victims of human rights violations demand it.” The court agreed and allowed us to present evidence as an interested third party.

What evidence did you present?

We had published a very detailed report entitled “Cut! Take Press TV off the Air” [Find the PDF here]. We presented the court with a complete English version of the report along with links to forced confessions on the Press TV website. Many times the lawyer for the European Union cited the Justice for Iran report and Ofcom’s verdict following Maziar Bahari’s complaint.

Are you going to participate in other trials?

Yes, but not only as a third party. One of Justice for Iran’s goals has always been to make the world a less hospitable place for the violators of human rights. So we build cases in various courts and in various countries against those who have violated human rights, using existing laws, whether they travel from Iran or live outside Iran. We use every opportunity, and if somebody gives us information about violations of human rights or about the violators, we definitely follow the case.

It seems that Sarafraz and Emadi have paid a hefty sum to their four Spanish lawyers. Now that the court has issued its verdict, where do the lawyers stand?

The lawyers got their money. But the more important point is that now Sarafraz and Emadi must pay both the lawyer for the European Union and the court expenses because they lost the case. The court did not announce a specific sum and it is going to send them the bill. But it will not be a negligible sum because the case lasted for more than two years — and you have to add the compensation for EU’s lawyer for this period to the court expenses. The unfortunate thing is that it is unlikely that this big sum will be paid by Sarafraz or Emadi themselves. The money comes from the Iranian treasury. Once again the people’s rights will be violated.