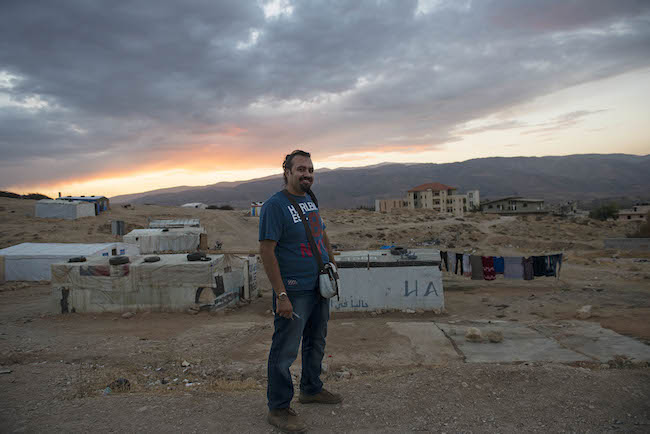 For more than a year Mohammad Ghannam was tortured and mistreated in jail in Syria. His crime? Working as a journalist. He now lives safely in France, but is left with deep scars, both physical and mental.

Despite the brutality of his story, Mohammad Ghannam has a smile on his face when he remembers his time in detention in Syria. “It’s the only way I can tell those stories,” he explains.

The 36-year-old Palestinian has permanent wounds and scars from the times he was repeatedly beaten in jail.

“Now when I talk about it, I just feel nothing. But when I am alone I have these moments when my spirit goes down,” he says.

Though he has left behind his home country and the inhumanity of life in prison, the memory of his torturer haunts him.

“The flashbacks are even worse than reality. I picture the torturer like a monster, not a person, with horns and big teeth, like in a horror movie. The atmosphere around the scene is always dark. Sometimes I even feel physical pain,” he says, “even though I am safe and fine. I am in a nice country, I am protected, and I have residency.”

The story of his journalism career began with the uprising in Syria in 2011. Ghannam, who holds a degree in mechanical engineering, started taking pictures of the protests in Damascus on his mobile phone. Speaking good English, he began working with a journalist from the Washington Post.

As the unrest escalated, so did Ghannam’s risk of being arrested. One day in the beginning of 2012, Syrian security forces visited his parents’ house looking for him. To avoid detention, Ghannam left Damascus immediately. The next months he lived as a fugitive in the Syrian cities Homs and Idlib, photographing events for Reuters and the Associated Press.

But, in April 2012 he was stopped at a checkpoint by government forces.

“My camera was in the car,” Ghannam recalls. “After searching the car, the guy came back, shouting ‘he has a camera’ as if he had found something explosive. He was really scared.”

The agents soon found out who Ghannam was, and that security forces had been looking for him.

“At that moment I just wanted to die, because I knew if I got detained they were going to torture me,” he says. They beat him up and took him into custody.

Ghannam was charged with “working with the enemy channels,” “making up fake stories,” “organizing protests,” and “blaming the army for destruction,” all in connection with the photographs he took. For three months, he was moved around between different interrogation units in Idlib, Aleppo, Homs and Damascus, where he was brutally interrogated and tortured. They wanted him to confess and to uncover names of other journalists, aid workers and activists.

Ghannam underwent “every kind of torture, except for electricity.” He recalls some of the most brutal events.

“In Aleppo they put me in a room with dead bodies for three days. The first hours I experienced all kinds of emotions. I cried, I panicked, I even laughed. I threw up, but then I got used to the smell. At some point I started having conversations with the bodies and I thought they were alive.”

After three days, the interrogator gave him sandwiches, juice and water. “I felt this emotional turn, suddenly believing they were the good guys. They gave me this feeling,” he says.

“Another time they hung me from my hands for two or three hours. My feet didn’t touch the ground. They would then lash me or splash me with hot water.”

The cruelty continued for three months.

“They sent me to the Palestine Branch in prison in Damascus. Here they tortured me in something called the heaven room. They do very bad stuff to you,” he says, clearly moved by the traumatic memory of the experience.

“I wanted to die, and to tell them everything. I was even thinking about joining them. I thought: ‘maybe I’m wrong. Maybe I should join them and protect the country against crazy people like me’,” he says.

“They promised to bring me to this room every day. The day after, I told them everything. So the torture worked perfectly.”

From prison to political refugee

Ghannam was then sent to jail where he spent almost a year. The beatings continued and he was at times put in solitary confinement for weeks. But compared to the months of interrogation, his time in prison was bearable. After a few months, he and the other prisoners started a revolution and eventually took control of the prison, despite the fact they were still prisoners.

In June 2013 he was released on bail, but because of the charges against him, Ghannam faced an eight-year prison sentence. He had been to the military court three times, but was never given the chance to argue his case.

“In court they put me in a cage like an animal. They dressed me in the prison uniform that looks like a zebra. It was very humiliating; like a circus. The judge told me the accusations against me. When I started talking he didn’t want to listen. I said, ‘for God’s sake, just hear me out’. He told me ‘here is no God. There is me, and don’t waste my time. You screwed up and you are going to pay for it’. And then he left. He never listened.”

Facing many more years in prison, Ghannam decided to flee to Lebanon a few days after his release. In Beirut he was hired by the New York Times to report on the conflict in Syria.

“But Beirut was like heaven, I found hundreds of friends there, and I got a job at the New York Times. I couldn’t be sad. Why should I? I had a perfect life there. So I thought it didn’t affect me.”

But in March 2014, Ghannam was forced to leave Lebanon, as the authorities refused to renew his visa. Being a Palestinian made it especially hard for him to obtain a work permit and residency. With help from a Syrian friend in France and the bureau chief of The New York Times in Beirut, Ghannam received a visa to go to France, where he later got asylum.

With Syria at a far distance, the disturbing memories from prison suddenly began to emerge.

“When I came to France, I broke down. I felt like a victim, I started crying almost every day. I started feeling ‘why am I living anyway?’ I thought I was going to make change, but I didn’t. Instead, I am just being exiled and isolated. I felt I am the biggest loser in the world, and got suicidal thoughts,” he says.

Since arriving in France more than a year ago, Ghannam hasn’t had been able to find a job, and he struggles with learning the language.

“I felt nothing was worth anything. We failed. We tried to change things in Syria; we tried to bring out the truth, because we thought it was going to help people get their freedom and democracy, not bring the country to what it is today. Things get worse, not better. And it’s not the revolt’s fault, not our fault.”

And when it comes to press freedom in Syria, the situation only becomes worse every day that passes.

“Now everyone wants to kill journalists. Either it’s ISIS, al-Nusra or the Syrian Government. No one wishes to listen to the truth.”

Four Years in an Eritrean Jail: “Poetry Gave Me Hope”​

Afghan reporter: "Threats are a part of everyday life”