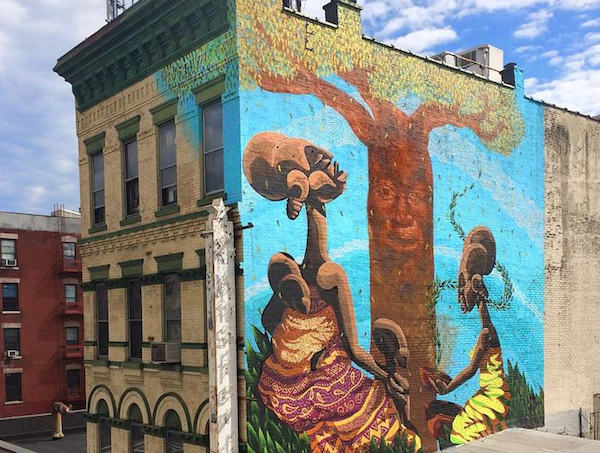 With seven murals created by recognized street artists around New York City, #NotACrime unveiled its latest project today – the most ambitious mural art project ever brought to the city.

Working with Street Art Anarchy, #NotACrime launched the campaign to raise awareness of human rights abuses in Iran. A dozen prominent artists from around the globe contributed to the mural project, which was curated by Street Art Anarchy, a New York start-up that works with internationally renowned street artists on contemporary art projects. More murals are still being added to the project, with a total of 12 artworks planned. They can be seen around New York City, and extend to the five boroughs and New Jersey.

​T​he mural pictured above is by Brazilian artist Alexandre Keto.

The street art aims to promote free expression, provoke conversation about human rights violations, and raise awareness of the Iranian government's failure to honor the Bahai's right to education in Iran. The launch of the campaign coincides with the new session of the United Nations General Assembly, which will take place during the third week of September, ahead of Iranian President Hassan Rouhani’s appearance there on September 28.

The Baha’is, Iran’s largest religious minority, are frequently jailed on false charges and denied access to higher education. Currently, 74 Baha’is are in prison in Iran.

In Brooklyn, the artist Faith47 has created a likeness of the jailed cartoonist and activist Atena Farghadani, who was sentenced to almost 13 years in prison in Iran for drawing a cartoon. The mural portrays her without a mouth.

“This campaign marries old and new forms of communication – street art and modern social media activism. It will spark an important conversation,” says Maziar Bahari, who is behind the initiative.

Working for Newsweek magazine in 2009, Bahari was jailed in Iran for 118 days following the Iranian presidential election because of his work as a journalist. His story is told in Jon Stewart’s film “Rosewater”. Bahari launched #NotACrime with the mission to effect change by forcing the Iranian leadership to acknowledge freedom of speech and the pursuit of education are not criminal acts worthy of imprisonment.

“At a time when the Iranian government brutalizes its people with impunity, and some groups vilify Iran and its people and condone starting a war with Iran, we will try to distinguish the Iranian government from the Iranian people,” Bahari says. “We will condemn the atrocities of the regime, while celebrating many ordinary Iranian journalists, teachers and students who are risking their security for their basic human rights.”

Hello #NYC. #NotACrime has officially landed! Education and journalism are crimes in Iran. But we can change that #Iran #HumanRights #StreetArt #streetartnyc #educationisnotacrime #journalismisnotacrime #paintthechange


The artists began work on the murals in late August and will continue throughout September. Some walls are direct responses to Iranian propaganda murals in Tehran, and others honor the individuals wrongfully imprisoned there.

Murals that are now up include work by:

Walls currently in progress include Ron English at 823 Broadway in Brooklyn and Nicky Nodjoumi at 11-22 Welling Court in Astoria, Queens.

Read more about the campaign and view the walls on #NotACrime's website.