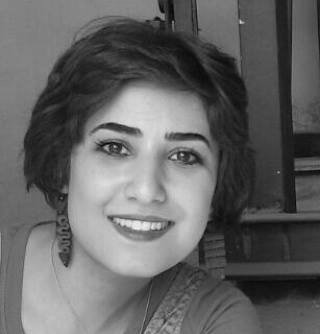 Atena Farghadani is a social media, children’s rights and civil rights activist. While studying art as an undergraduate, Farghadani drew pictures of parliamentary representatives caricatured as animals, leading to her arrest and a ban on further study at university.

In response to the charges against her, Farghadani wrote a letter to the Supreme Leader, Ayatollah Ali Khamenei, in which she said: "What you refer to as an 'insult to the representatives of parliament,' I deem to be artistic self-expression.“

Atena Farghadani is a social media, children’s rights and civil rights activist. While studying art as an undergraduate, Farghadani drew pictures of parliamentary representatives caricatured as animals, leading to her arrest and a ban on further study at university.

After she was prohibited from studying, Farghadani was arrested in August 2013. The arrest was prompted by her drawings of the parliamentarians, which she published on her Facebook page, as well as because of her meetings with families of Iranians killed during the 2009 protests as well as some relatives of political prisoners.

While Farghadani was in police custody, security agents searched her father’s home and confiscated a number of her personal items.

Farghadani later spoke about the day she was arrested to the FARS / Green Movement News Agency, saying “They turned the whole house upside down, they even searched the spaces above the ceiling tiles. It was like the house had been struck by an earthquake. I thought that they didn’t even treat terrorists like that. They took bags and bags of our personal belongings from the house, including books by Ahmad Shamlou and Sayyid Mehdi Mousavi, as well as my phone and tablet. But they had not put the tablet or the phone on the list of confiscated items, so when my dad went to get my things, they didn’t give these back because they weren’t on the list.”

Farghadani spent two months in Section 2A of Evin Prison being interrogated by the Revolutionary Guards. No court case was brought against her during that time and she was not informed of any accusations against her.

On October 1, 2014, Farghadani went on hunger strike along with her cellmate Goncheh Ghavami, who was arrested at Azadi Stadium for protesting against women being barred from attending public sporting events. After eleven days of hunger strike, they intensified their protests by abstaining from drinking water.

During this time, Farghadani’s physical condition deteriorated to life-threatening levels. As a result, a Revolutionary Court presided over by Judge Salvati ordered her temporary release on a bail set at 600 million tomans. But to Farghadani, the real price of her bail was set at 1.3 billion tomans.

Farghadani also learned of the charges against her, which includes “propaganda against the state,” “actions against national security,” “gathering and colluding with counter-revolutionary and counter-Shi’i individuals,” “insulting parliamentary representatives through drawings,” “insulting the Supreme Leader,” “insulting agents of the Revolutionary Guards’ and “insulting heads of the three branches of state.”

Farghadani used her temporary release to disclose the conditions in which political prisoners were held. On November 23, 2014, she published a video on her social media accounts which exposed details of abuse, oppression and civil rights violations by the women’s prison guards.

Farghadani also said that cameras had been installed in the bathrooms and toilets of the women’s sections in the prison. “The solitary confinement cells did not have any form of toilet,” she added at the time, “and I would have to slide a piece of paper under the door to request to use the facilities. (One would have to wait for hours as no one would come to take Goncheh or I to the bathroom. We were forced to sleep on our stomachs so that we could hold on until they came.) ... Both in the showers and in the toilets there were cameras. When we asked them what the cameras were for, they said ‘Those cameras don’t work’. One day I saw two single-use paper cups in the toilet rubbish bins, which I picked up and hid under my clothes so that I could take them to my cell. Instantly, I heard a bunch of guards whispering and asking ‘Rewind the footage: why does she want those cups?’”

Farghadani explained further: “I realised that the cameras in the toilets and the showers did work. Later, when I was in my cell, one of the barbaric female prison guards opened the cell door and said ‘Take off your clothes.’ I said: ‘It’s not right for me to take off my clothes here.’ She started screaming at me. I took the paper cups, which I had taken from within my clothes, and threw them on the ground. I said: ‘These are what you wanted, aren’t they?’ But she again said: ‘Take off your clothes.’ Another prison guard came and violently forced me into the corner of the cell. The two of them grabbed my arms and I screamed: ‘Please don’t do this!’ One of the women put her hand over my mouth and said ‘Be quiet, the men’s cells are below you, they’ll hear your voice. If you don’t shut up, I’ll hit you until your mouth is full of blood and then you’ll be silent.’ One of the guards then slammed my hands against the wall behind my head, which made the bones in my hand swell and hurt for a long time. The two female prison guards forcibly removed my shirt, doing so very brutally. They had gripped my body so forcibly and for so long, saying the worst curses and insults that I cannot repeat. They then pulled down the clothes covering my lower body.’”

After Farghadani published the video on her social media pages, Branch 15 of the Revolutionary Courts, presided over by Judge Salvati, summoned her for a further hearing on December 28, 2014. Farghadani was tried on December 30 and, after presenting her defence, she was beaten in court in front of her own family. Farghadani was then transferred to the Varamin Qarchak Prison east of Tehran.

After Farghadani was moved to Qarchak Prison, she protested against the court’s decision and went on a new hunger strike, requesting to be transferred back to Evin. Her request was denied by the judicial authorities. Farghadani’s lawyer announced that, after 18 days of hunger strike, her physical condition had deteriorated significantly and that she had been transferred to hospital to recover.

After 21 days of hunger strike, Farghadani’s request was accepted by the authorities and she was returned to Evin Prison.

Farghadani was finally sentenced to 12 years and 9 months in prison by Judge Salvati in Branch 15 of the Revolutionary Court. She was informed of the court’s ruling in prison on June 1, 2015.

An appeals court judge heard Farghadani’s case in the presence of her lawyer, on December 20, 2015 in Branch 54 of Tehran’s Appeal Courts.

In late April 2016, while Farghadani was still imprisoned, her lawyer Mohammad Moghimi announced that her sentence had been reduced to 18 months in prison.

Moghimi said: “According to the Branch 54 Appeals Court ruling, my client has been acquitted of the accusation of ‘gathering and colluding with the intention of committing crimes against national security’ and that the three-year prison sentence for the accusation of ‘insulting the Supreme Leader’ has been delayed by four years. Her nine-month imprisonment for the accusations of ‘insulting the current Iranian president,’ ‘insulting parliamentary representatives’ and ‘insulting agents of Section 2A of Evin Prison’ have been converted to fines. Unfortunately, however, the lower court’s accusation of ‘propaganda activity against the Islamic Republic of Iran,’ which carried an 18-month imprisonment, has been upheld.”

Farghadani was released from Evin Prison just a week before she was set to complete the entirety of her sentence, on May 3, 2016.