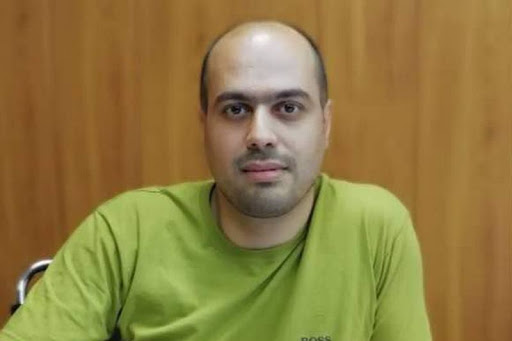 Masoud Kazemi, a former journalist and political prisoner, has posted a picture of himself painting houses on Instagram and informed friends and followers that he has left the media in Iran for good.

Kazemi previously worked as a reporter for the newspapers Sharq and Qanun and as editor-in-chief of the monthly journal Seday-e Parsi. He was arrested by security forces during a raid on his Tehran home in November 2018, and later sentenced to four and a half years in prison by Branch 28 of the Revolutionary Court.

The charges included “spreading lies”, “insulting the leadership” and “acting against national security”, and were based on criticisms he had made of the country’s Ministry of Industry on Twitter. Kazemi was sent to Evin Prison in May 2019 and his four-and-a-half-year sentence was upheld by the appeals court in August that year.

He was released only after his lawyer managed to post a bail of 10 billion rials (US$237,500), and was finally granted permanent freedom during the pandemic in April 2020, but subject to an official ban on journalistic activities in Iran.

The ex-reporter reported being harassed by security agents even after his release and throughout 2020. “What do they want from an unemployed and silenced journalist?” he wrote on Twitter in November. “I was suffocated, isn't that enough?”

In his latest Instagram post, Kazemi wrote: "After my release from prison and because I was banned from working, I had to find a job to get by. I learned to paint buildings experimentally, from my father, and we have been working together for several months now. I am unhappy because I remain fascinated by writing, and I am happy because I am trying to live an honorable life.”

Kazemi added that even had he not been banned from working as a reporter, he would never have attempted to use the media as a propaganda tool. He concluded by inviting followers to commission him for painter-decorator projects in Parand, Tehran province and the surrounding small towns.

This reporter is far from the only Iranian journalist to turn away from the profession after being arrested and pressured by state security forces. The ex-journalist Mahsa Amrabadi now sells local produce from Gilan after being released from prison. Countless others have moved into public relations and corporate communications.