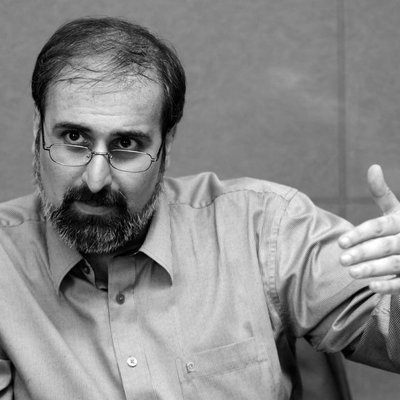 Three years in prison after the first arrest; unknown for second arrest

Journalist, media advisor for Ahmadinejad during his presidency

Abdolreza Davari was deputy of the Islamic Republic News Agency, or IRNA, and a media advisor to former Iranian president Mahmood Ahmadinejad. He was also the manager of the Shahrvand (Citizen) newspaper.

Davari has been arrested twice to date. The first arrest, in 25, led to a jail sentence of three years which he began serving in May 2017 at Evin Prison.

In September 2015, the Iranian Labor News Agency, or ILNA, reported that Davari’s trial was being heard in Branch 15 of the Revolutionary Court, presided over by Judge Salvati. Davari was sentenced to six-and-a-half years in prison on charges including “insulting the Supreme Leader” and “spreading lies” due to three comments made by “unknown individuals” on a Facebook page related to Mr Davari. ILNA’s report added that the “allegations” against him had come from Iran’s “cyber police” as well as the Revolutionary Guards’ and judiciary’s cyber divisions.

Davari’s sentence was later reduced to three years in prison during his appeal to the Appeals Court 36 presided over by Judge Zargar. He began his sentence on May 31, 2017, in Evin Prison. Davari was released early, after 15 months, on September 3, 2018. Mehdi Mostafapour, his year, said that the early release was thanks to a reversal of his conviction by Branch 33 of Iran’s Supreme Court.

On June 15, 2019, reports surfaced in Iranian media claiming that Davari had committed suicide. Davari personally refuted the stories by posting on his own Twitter account.

On November 19, 2019, Fars News reported that Davari had again been arrested on charges of “collaborating with the opposition network Amad News.” The Revolutionary Guards had in the previous month arrested the found of the Amad News Telegram channel, Ruhollah Zam.

“We can confirm that we have arrested this individual and that he has been charged with a number of accusations,” Esmaeili said. “We cannot disclose the details of these accusations, however, the issue of communications with this network [Amad News] is among the charges that have been brought against him. His case is currently undergoing preliminary investigations.”

More information regarding Davari’s condition is is unavailable and he remains in the custody of the judiciary.