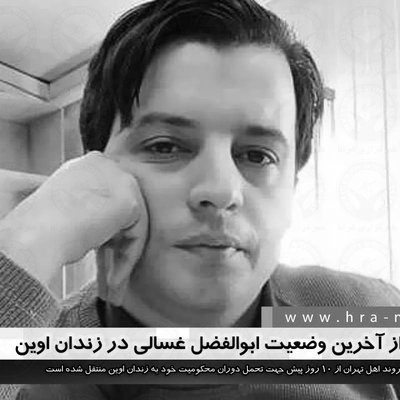 Abolfazl Ghasale was arrested by security forces in 2017 due to his involvement in managing a Telegram channel. He was sentenced to three years and six months in prison because of his posts on the social network. Ghasale was released on bail a few days later.

He was initially sentenced to seven years in prison in 2018 by Branch 28 of the Revolutionary Court of Tehran, presided over by Judge Mohammad Moghiseh. He was charged with “gathering and colluding against national security”, “disturbing public order,” and “insulting the Supreme Leader of Iran,” Ayatollah Ali Khamenei.

Ghasale's prison sentence was later reduced to four years and nine months in Branch 54 of the Court of Appeals of Tehran, presided over by Judge Babaei. In accordance with Article 134 of the Islamic Penal Code, the maximum enforceable punishment against Ghasale was three years and six months in prison. The Court of Appeals also acquitted Ghasale of the charge of “insulting the Supreme Leader of Iran.”

Abolfazl Ghasale was transferred to Evin Prison in Tehran on August 23, 2020 to begin serving his prison sentence.