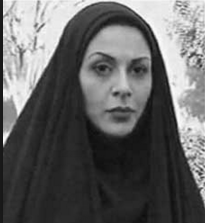 On November 3rd 2015, intelligence agents of the Revolutionary Guards arrested Afarin Chitsaz at her home in Tehran and took her to an unknown location.

Chitsaz regularly writes editorials on foreign policy for the newspaper ‘Iran’, and her columns have been carried by the official Islamic Republic News Agency, IRNA.

At least four other journalists were detained in the first few days of November 2015. Within two days the Revolutionary Guards arrested Isa Saharkhiz, journalist and political activist, Ehsan Mazandarani, managing editor of the newspaper Farhikhtegan, and Saman Safarzaei, a member of the editorial board of the monthly publication Andisheh Pouya. The name of the fifth person has not been disclosed.

The specific charges against Chitsaz have not yet been announced. But the Intelligence Unit of the Revolutionary Guards has accused the arrested journalists of being members of an “infiltration network” cooperating with hostile foreign governments.

Chitsaz, who has acted in a number of Iranian movies, was once married to the well-known actor Ali Dehkordi. She also designed costumes for films.

She is a supporter of Iran’s President Hassan Rouhani and started writing about foreign policy after Rouhani was elected as president in 2013.

According to the website Amad News, “the Intelligence Unit of the Revolutionary Guards first attempted to smear Chitsaz with rumors, and then frame Iran’s Foreign Minister Mohammad Javad Zarif by linking the two together, but did not succeed in this ongoing project. Because of her profession, Chitsaz has close working relations with Hassan Rouhani’s government, including senior advisor Hossein Fereydoon, Minister of Culture and Islamic Guidance Ali Jannati and Foreign Minister Mohammad Javad Zarif. Before Rouhani was elected president she spent some time in Paris and engaged in artistic activities including painting and dress design.”

The hardliner website Dana wrote that Chitsaz was close to the officials of the Ministry of Culture and Islamic Guidance, implying that her columns communicated the ministry’s views. “In one of her last columns,” the hardliner website wrote, “she described the protests in Isfahan and Yazd against a visit by [former British Foreign Secretary] Jack Straw as breaking the law regarding foreign guests.”

Chitsaz’s whereabouts are unknown, and she has not yet contacted her family.