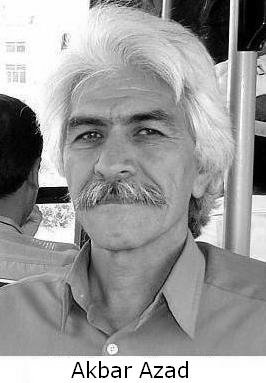 Civil society activist and author Akbar Azad, originally from East Azerbaijan, was arrested at his home in Tehran on May 24th, 2010.

Security agents raided Azad’s home, located in the Kianshahr neighborhood in Tehran. They arrested Azar, intimidated his family and confiscated his personal belongings, including computers, books and notes.

International groups Amnesty International and Reporters Without Borders issued separate statements condemning the detainment of Azad, who is also a staff member for the established Azerbaijani publication Varliq and another publication, Parpaq, and calling for his immediate release.

He was detained for one month, but then, on February 21st 2014, International Mother Language Day, Azad was arrested once more,  along with other civil activists while they were attending a seminar in Nasim Shahr, Tehran. He was taken to Evin Prison, and released three months later on a bail of US$30,000 bail.

The Islamic Revolutionary Court later sentenced him to 10 years in prison and two years in exile in a small city in the west of the country, because he had organized a seminar with no permit.