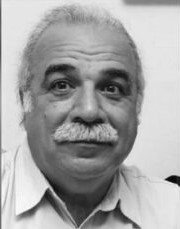 Ali Akbar Amini is a writer and the executive director of Nashr-e Degar Publishing. Amini was arrested during widespread protests that followed the contested results of the 2009 presidential election.

Security agents had raided the Nashr-e Degar offices as well as the family home and had arrested Amini, his wife Nazi Oskouei, and their son, Yashar Amini, who was the company's technical director.

All three were sentenced to a year in prison.

On December 8, 2020, eight years after the verdict was originally issued, Amini was arrested and transferred to prison to begin serving his prison sentence.

The Iranian Writers' Association issued a statement, saying: “For quite some time now, Amini and Oskouei’s [bank] accounts had been blocked because of this legal case and the pair have been summoned to court.”

Nazi Oskouei, who also received her one-year prison sentence in 2012, on the same charge, has not yet been summoned to begin serving her sentence due to medical reasons. Oskouei is currently awaiting a forensic doctor’s report which will determine whether she is physically able to serve her prison sentence.

Amini and Oskouei also both served time as political prisoners of Muhammad Reza Pahlavi, the last Shah of Iran, prior to the 1979 Islamic Revolution.

Their son, Yashar Amini, was transferred to prison in February 2011 to serve his one year prison sentence against him. He was released in December 2011.