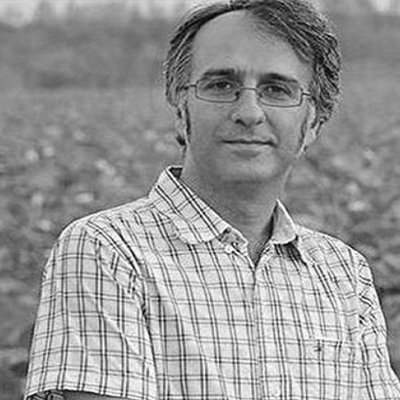 Alireza Alinejad is a writer and editor from the city of Babol. His sister, Masih Alinejad, is an Iranian journalist and women's rights activist who lives in the United States.

Alireza Alinejad was arrested on September 25, 2019, by Revolutionary Guards agents at his home in Babol. Many described his arrest as an attempt by the Islamic Republic to punish Masih Alinejad, Alireza's sister, an Iranian journalist and women's rights activist living in the United States.

A few days after the arrest, Amnesty International issued a statement condemning the persecution of relatives of civil and political activists by the Islamic Republic to pressure and silence such activists.

Around the same time, Masih Alinejad released a video of her brother in which he spoke about the pressure of government officials on their parents to take a public stand against her journalism and human rights activities.

In this video, Alireza encouraged his sister to continue her work. According to Masih Alinejad, his brother's crime was merely that he was her sibling, because he revealed to his sister that the Revolutionary Guard had a plan to lure her to Turkey and to force her to return to Iran.

In the video, which was recorded by Alireza himself, he told Masih that intelligence agents were trying to persuade their parents by threatening and pressuring them to denounce Masih on Iranian national television. He asked Masih to continue her activism without worrying about his arrest. "Don't be silent; speak up," he said in the video.

Alireza Alinejad was transferred to the general ward of Evin Prison on May 7, 2020, after 225 days of detention in Ward 1A, which belongs to the Revolutionary Guard, and was held there until the end of his trial and appeals hearing.

In July 2020, while Alireza was still in prison, Branch 28 of the Revolutionary Court of Tehran, headed by Judge Mohammad Moghiseh, charged him with three counts of "conspiracy to act against national security," "insulting the Supreme Leader," and "propaganda against the regime" and sentenced him to eight years in prison, of which five years were enforceable. After the sentence was handed down, Masih Alinejad called it "eight years in prison for the crime of [being my brother]."

The sentence was confirmed on October 18, 2020 at Branch 36 of the Tehran Court of Appeals.

Alireza Alinejad was given a temporary leave from Evin Prison on May 13, 2021.

According to Dehghan, his client qualified for parole on May 24 and Alireza Alinejad was released on parole on August 3, after serving more than two-thirds of his sentence.

On August 4, Masih Alinejad wrote: "My brother was released on parole. Neither the hostage-taking of an innocent brother silenced my voice, nor the rationing of his freedom will silence it. I miss my brother's embrace. But while Iran's prisons are full and the arms of grieving mothers are empty, I will shout louder against the dictatorship and continue my efforts until this government is overthrown."