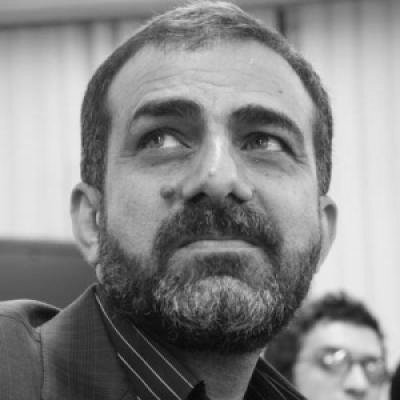 Journalist and political activist; Editor-in-chief of Kaleme Sabz and director of Al-Hoda publications; Member of the Islamic Republican Party.

Alireza Beheshti Shirazi was sentenced to five years in prison for his political affiliations with former Prime Minister Mousavi, and his journalism that supported him.

He is currently at Evin Prison where he has endured continuously harsh interrogation tactics and months in solitary confinement.

Alireza Beheshti Shirazi was an advisor to Mir Hossein Mousavi when he was prime minister of the newly-founded Islamic Republic in the 1980s. During the Iran-Iraq war, he was on the frontline as one of Mousavi’s representatives. After the war, he left politics and set up Rozaneh, a publishing house. He returned to politics when Mousavi announced he was putting himself forward for the 2009 presidential election. He also became editor-in-chief of Kaleme Sabz, a paper that supported Mousavi’s candidacy.

Ten days after the results were released, security forces raided the Kaleme Sabz offices and arrested Shirazi, although he was later released on bail. He was arrested a second time on December 28th 2009, and was forced to spend almost three months in solitary confinement at Evin Prison, where he was placed under enormous pressure to confess to his “charges.”

While in detention, his son was also arrested as a means of applying further pressure on him. His family was allowed to visit him just once and his repeated requests to talk to Tehran’s Prosecutor Jafari Dolat-Abadi were ignored. Eventually, on May 31st 2010 he met with him, using the opportunity to object to how he’d been treated, interrogated and confined to solitary confinement. The prosecutor ordered for him to be moved to Ward 7, where many political prisoners were kept. On October 3, 2010 he was released on bail after having spent nine months in detention. He was tried at Branch 26 of the Revolutionary Court presided over by Judge Pir Abbasi, who sentenced him to five years in prison, a sentence which was upheld by the appeals court and that he began serving on July 12, 2011. He is currently serving time in Block 350 of Evin Prison, a cell block well known for housing political prisoners.