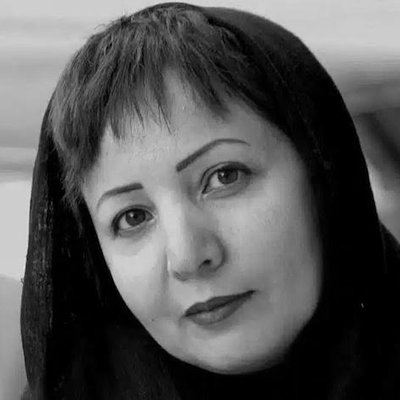 Aliyeh Motallebzadeh is a photographer, vice president of the Association to Defend Freedom of the Press and a women's rights activist. Motallebzadeh has been an active member of the "One Million Signatures Campaign" and the "Campaign to Support Acid Victims." She also made a film titled "Let's Not Forget Women Victims of Violence in Society" which is about the spate of acid attacks on women.

On October 16, 2016, four agents of the Tehran Ministry of Intelligence stormed Motallebzadeh's residence without a permit. After a few hours of searching, they confiscated personal items belonging to her, her husband and their daughter.

Some time later, she was contacted by the Ministry of Intelligence and was asked to go to the Ministry to collect her documents which were confiscated during the search. But she was arrested upon her arrival to the Ministry on November 26, 2016 and was sent to Evin Prison.

She was interrogated for 25 days in solitary confinement in Ward 209 of Evin Prison by Ministry of Intelligence agents. She was later released on a 300 million toman bail.

According to Sadra Abdollahi, Motallebzadeh's husband, the Ministry of Intelligence confiscated his wife's 25-year-old photo archive. In response to her inquiries, she was told that the archive would never be returned to her.

Motallebzadeh was sentenced to three years in prison by Branch 26 of the Revolutionary Court on August 15, 2017, on charges of "conspiracy against national security" and "propaganda against the regime."

This sentence was approved two years later, in October 2019, by Branch 36 of the Revolutionary Court. Due to Article 134 of the Islamic Penal Code, two years of imprisonment of her sentence is enforceable.

On October 11, 2020, Motallebzadeh was summoned to the Enforcement Unit of the Evin Prison court, where she was arrested and transferred to Evin Prison to serve her sentence.

Some of Motallebzadeh's photographs, such as photographs of Kuye Daneshgah Disaster (1999) or the photograph of Nasrin Sotoudeh in handcuffs hugging her husband in front of the Bar Association building, received considerable attention.

Two days after Motallebzadeh’s sentence was carried out, the Association to Defend Freedom of the Press issued a statement calling for her case to be re-examined as a "political crime."

The Association described the allegations against Motallebzadeh "particular," "repetitive" and similar to the hundreds of other allegations against journalists and civil society activists: "[These are] indeterminate allegations that have been defined by specific organizations to accuse critics and sentence them to long periods of imprisonment.”

On July 18, 2021, in a telephone conversation with her husband, Motallebzadeh reported that Covid-19 had spread to the women's ward of Evin Prison, and that the deputy director of Evin Prison had responded to the prisoners' protest about the lack of sanitation and the spread of Covid-19 by saying: "People are also dying from Covid-19 outside the prison. It doesn't matter if people are dying inside."

Two days after this revelation, when Motallebzadeh tested positive for Covid-19, she and two other female prisoners were sent on medical leave.