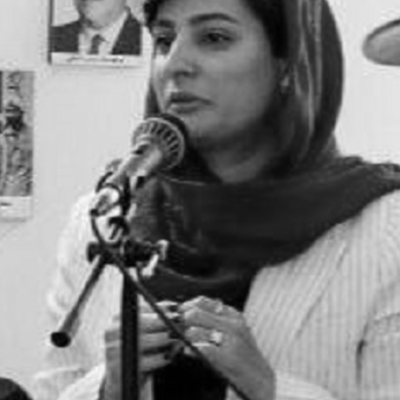 Elaheh Mohammadi is a reporter for Tehran’s reformist newspaper Ham-Mihan.

After reporting from the Kurdish town of Saghez on the funeral of Mahsa Amini who died in the hands of Morality police, she was arrested on September 29.

According to the Human Rights Activists News Agency (HRANA), Mohammadi’s lawyer, Mohammad Ali Kamfiroozi broke the news on his page on social media, saying that the intelligence agents summoned and arrested her while she was on the way to the Ministry of Intelligence office.

Security forces had also raided Mohammadi's home in Tehran, her lawyer said. Her husband wrote on Twitter that she had said in a short phone call she was being held in Tehran's Evin prison and had not been informed of any charges.

In 2021, Elaheh Mohammadi was banned from writing for the press for a year upon a complaint filed by the Intelligence Organization of the Islamic Revolutionary Guards’ Corps (IRGC). The ban was due to her reporting on the horrible conditions of women in Qarchak Prison and the Revolutionary Guards’ downing of Ukrainian Airlines Flight 752 in January 2020.

On December 23, 2021, journalist Elaheh Mohammadi tweeted: “In April 2020, I wrote a report for khabaronline.ir about the conditions in Qarchak prison in the days of the Coronavirus outbreak. When the report was published, the IRGC Intelligence sued me. The case was filed on charges of propaganda against the state and spreading lies to disturb the public mind. After several interrogation sessions by the IRGC regarding the report on the downing of the Ukrainian plane, the November 2019 (protests), my activities in the harassment watchdog group, and my reports on issues related to women, I was arraigned of the charges and granted bail of 150 million Tomans.”

Elaheh Mohammadi was among 11 journalists who issued a declaration in 2020, criticizing the Association of Journalists in Tehran Province for maintaining silent about sexual assault on women who work in the press and media. They formed the Assembly to Combat Sexual Harassment of Women in the Media.