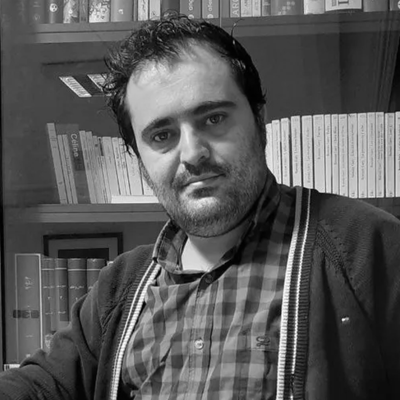 Farshid Ghorbanpour, manager of the online bookstore Soren and a literary journalist who works with the Tehran newspaper Haft-e Sobh.

In the wave of arrests following nationwide protests over the death of Mahsa Amini in the hands of Morality Police, Ghorbanpour was violently arrested in a dawn raid on the family home on September 25, 2022. His wife Somayeh Norouzi, a translator and an editor, and their four-year-old son Soren were woken at quarter past three in the morning by baton-wielding intelligence agents beating Farshid in the kitchen, by choking smoke bombs and pepper spray.

According to Somayeh Norouzi, the security agents confiscated personal effects including their laptops and mobile phones and took him away. It also remains unclear to which organization these security agents belong.

During the arrest, the noise brought neighbors out of their houses. Officers pointed their guns at them instead, and threw mother and child out of the house. They told Somayeh that they were taking her husband to Evin Prison’s Ward 209 which is known as one of the most horrific places political detainees can be taken. Under the oversight of the Intelligence Ministry, its officers have a reputation for brutally torturing prisoners until they confess to fabricated crimes.

There has been no news of Farshid since his arrest. The judiciary has not released an official statement on the reason he was dragged from his house, nor it has provided an update on the case to his own family.

Since the so-called reformist era in Iran from 1997 to 2005, Farshid Ghorbanpour has produced a literary supplement, Hayat-e No (New Life), in his home city of Astaneh Ashrafiyeh in Gilan province. He has been a member of the media since the age of 18 and is a published literary critic and theorist of many years, most recently producing content for the literary pages of Haft-e Sobh newspaper.