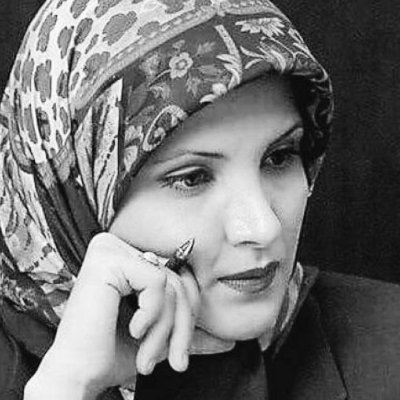 12 Years and 9 Months in Prison

Hengameh Shahidi is a veteran journalist and human rights activist who has been arrested and imprisoned more than once, most recently being sentenced to 12 years and 9 months in prison for criticizing Sadegh Amoli Larijani, the former chief of the Iranian judiciary.

Hengameh Shahidi to President Rouhani: “After the suffocating days of Ahmadinejad’s era, you were expected to let the reformists breathe, not strangle them the way that he did.”

Women’s and human rights activist and journalist Hengameh Shahidi was the reformist presidential candidate Mehdi Karroubi’s advisor for women’s affairs in 2009. She was born on May 14th 1975 in Mashhad to a family of teachers. Both her father Hashem Shahidi and her mother Nahid Kermanshahi were schoolteachers in Mashhad. In 1993, when she was 18, she started her studies in journalism at university. She got married that same year had a daughter named Parmis Taherian in 1998.

Hengameh Shahidi started her professional career with the newspaper Akhbar while she was still a student. Her graduation coincided with the election of Mohammad Khatami as president. In 1998 she started her graduate studies in the field of communication and later received her degree in this field. She was, and is, a Ph.D. student at the School of Oriental and African Studies in the United Kingdom before returning to Iran for the 2009 presidential election.

Throughout these years she worked with reformist papers and published numerous political articles and interviews on Iranian domestic and international policies and on women’s affairs.

She worked as a field reporter during the war in Afghanistan and the American invasion of Iraq. She continued to visit these countries and reported on them extensively.

Hengameh Shahidi has been a tireless defender of human and women’s rights in Iran. In 2003, in an open letter to the Supreme Leader, she asked him to spare the life of Afsaneh Norouzi, a woman who had killed a man who was trying to rape her. Shahidi was also a supporter of the Campaign against Death by Stoning and in 2006 and she campaigned to save Nazanin Fathi from execution by stoning.

Aside from journalism, Shahidi became involved in politics as well. In the last two years of Mohammad Khatami’s presidency, she was an advisor to the president of the National Youth Organization. In 2005 she was the head of the Women’s Committee of Akbar Hashemi Rafsanjani’s presidential campaign and a member of his think tank. In 2008, she joined the reformist National Trust Party, led by Mehdi Karroubi and was picked as his advisor on women's affairs.

Hengameh Shahidi was first arrested on June 30th 2009, during the first wave of repressive arrests targeting journalists and political activists during the aftermath of the presidential elections of 2009. She was charged with “participating in illegal gatherings”, “collusion to harm national security”, “propaganda against the regime” and “insulting the president [Mahmoud Ahmadinejad].”

In early 2017, Shahidi was again arrested by the Revolutionary Guards’ Intelligence Unit in Mashhad and was transferred to Evin Prison’s Ward 209 that holds security prisoners. She remained in prison for two months even though, according to her mother, she was suffering from heart disease. All throughout her arrest, she was held in solitary confinement and was not allowed to call her family for days.

At the time, a group of representatives to the parliament asked the minister of intelligence to explain why Shahidi was in prison.

“After the suffocating days of Ahmadinejad’s era, you were expected to let the reformists breathe, not strangle them the way that he did,” Shahidi wrote in an open letter to President Hasan Rouhani. She asked Rouhani, as the head of the executive branch, to stand up against prosecuting journalists and civil, political and social activists on trumped-up charges.

On March 27th 2017, in a cabinet meeting, President Rouhani asked his interior minister to report what had been done about the suspicious arrests of journalists on the eve of the presidential election. Then, in a press conference after the Iranian new year’s holiday and without naming names, he announced that those arrests had been illegal. Nevertheless, the judiciary rejected Rouhani’s claim.

On August 29th 2017, Shahidi’s lawyers reported that his client had been released from prison on bail.

On June 26th 2018, Shahidi was arrested for the third time while she was on vacation on the island of Kish and was taken to Evin Prison. A few weeks earlier, she had reported that she had been summoned to court again. She told Journalism Is Not a Crime that she had been summoned on the charge of insulting the head of the judiciary. “The evidence for insulting him was the letters that I had written him,” she said.

“Whenever I protested against the illegal extension of my arrest the interrogators replied that in the past six months my arrest warrant had been renewed by direct orders from the person of Ayatollah Amoli Larijani and he was behind my case,” she wrote in a letter in early 2018 to the judiciary chief, Sadegh Larijani.

On June 26th 2018, Tehran Prosecutor Abbas Jafari Dolatabadi reported that Shahidi had been arrested on Kish island and made a strange claim: “This accused…was apprehended by police officers while she was wearing a mask to escape detection.”

On July 1st, Dolatabadi indicted Shahidi on five charges that, according to her lawyer Mustafa Turk-Hamedani, were “defamation,” “dissemination of false information,” “insulting regime officials,” “propaganda against the regime” and “conspiracy against national security.”

Hamedani told the Iranian Students’ News Agency (ISNA) that Branch 15 of the Revolutionary Court had sentenced his client to 12 years and nine months in prison and that he had appealed the ruling. But on May 12th 2019, he reported that Branch 36 of Tehran’s Revolutionary Court of Appeals had upheld the sentence in its entirety. According to Article 134 of the Islamic Penal Code, Shahidi has to serve the longest sentence on any charge for which she has been found guilty, i.e., seven and a half years for conspiracy against national security, as evidenced by her writings on social media and her criticisms of Chief Justice Sadegh Larijani.

Shahidi was also banned for two years from leaving the country, activities on social media, and political activities.

Nevertheless, the charges against her by the Intelligence Minister Heydar Moslehi were dismissed by the court. In a speech earlier, Moslehi had accused her of espionage.

Since her last arrest in June of 2018, Hengameh Shahidi has not been granted even one day of leave of absence, despite repeated requests by her lawyer.

Trial of Ruhollah Zam and medical leave of absence

Shahidi was sent on leave of absence on bail of 800,000,000 tomans on March 9, 2020, following the outbreak of the coronavirus in Iranian prisons, and remained on leave until April 26.

On June 2, 2020, in the fifth session of the trial of Ruhollah Zam, the founder of Amadnews, statements made by the representative of the prosecutor, quoting Shahidi, regarding the emotional relation between Zam and Shahidi, as well as Amadnews publishing news sent by this journalist.

Judge Salavati, the head of Branch 15 of the Revolutionary Court, who eventually sentenced Ruhollah Zam to death, told Ruhollah Zam at the hearing: “Hengameh Shahidi cooperated with you and was convicted in connection with these cases, and her sentence is final.”

Following the publication of these statements, Seyyed Ali Asghar Hosseini, Shahidi's lawyer, published a letter on June 11, 2020, asking the court to present its evidence in this regard. The letter says: “I request Judge Salavati and the Revolutionary Court to publish any evidence, a video or a signed statement from Shahidi which proves that she stated any of the claims presented in the trial session. They should publish the evidence as soon as possible.”

Shahidi's lawyer emphasized: “Otherwise, as a necessity and in defense of my client, the details of Shahidi's case and the manner in which her sentence was issued will be published so it is known to everyone if Shahidi been arrested, tried and sentenced to 12 years and nine months in prison and imprisoned in a legal and fair process or not?”

Three months later, in September 2020, Shahidi was sent on a three-day leave of absence for medical treatment for the second time since her arrest.