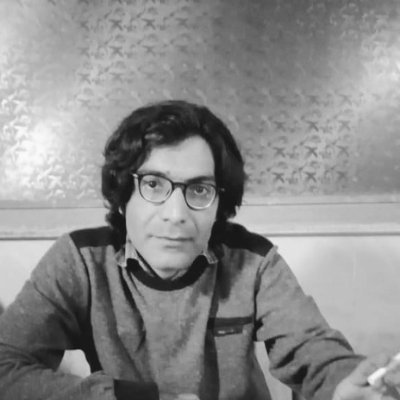 Mehdi Salimi is a writer and translator who lives in Tehran. He previously worked as the editor-in-chief for the online publication Charcoal and the Mind Motor website.

Salimi translated Castration or Decapitation? by Hélène Cixous and the book The Lacanian Real by Slavoj Žižek. He has also authored two books, The Sorrow of Siavoshan in 2019, and Theoretical Violence, a collection of articles on art and critical aesthetics, which were published by Iran Free Publishing in Sweden in 2016.

Salimi was arrested by security forces at his parents’ home in the city of Ahar on July 7, 2020. He was released from Evin Prison on a bail of 500 million tomans after spending 40 days in detention and under interrogation.

Jalal Salimi, Mehdi Salimi’s brother, announced his brother's release by posting a photograph on Instagram and saying he had settled the bail amount on Monday, August 18, 2020.

Prior to this, Jalal Salimi published a post on his Instagram page saying that Mehdi had been arrested: “My brother was arrested today, on July 7, at about 9:30am at our family home in Ahar. He was then taken to the 33rd [Evin] Prosecutor’s Office."

Mehdi Salimi initially faced accusations of “propaganda against the regime,” “inciting people to corruption and prostitution” and “gathering and collusion against the state,” a charge that was described by the Human Rights Activists News Agency “actions against national security.”

The courts initially issued Mehdi Salimi a bail of 1.2 billion tomans, but this was reduced to 500 million tomans.

Mehdi Salimi posted a statement on his brother’s Instagram page on August 9, 2020, which said: “I have no collateral worth enough to secure that amount of bail except for the deed to our family house, which I do not exclusively own or [will not exclusively] inherit. According to details of the bail notice, if it is not overturned or edited in any practical way, such an amount is exorbitant and almost impossible to pay. So I will wait patiently along with many of my comrades or, as [Ahmad] Shamlou says, 'those same children of the depths who are kept prisoners there without a lawyer, the possibility of bail or visitation and who are forced to occupy themselves in patient waiting and cast their eyes to the judgments of the unjust courts.'”

Mehdi Salimi was arrested on July 7, 2020 by agents from the Ministry of Intelligence in the city of Ahar. He was then flown to Tehran and transferred to Section 209 of Evin Prison.

In a tweet published on June 14, Salimi disclosed that he had previously been threatened about some of his writings. He also tweeted that he would not be silenced by threats from lumpen individuals [a marxist term for those who oppose class revolution]: “Now, I have received threatening phone calls. Despite all of the very threatening messages that I have received from lumpen individuals, I have simply said that when you tell a writer not to write it’s as though you’re telling someone not to breathe. The response was: If you continue [to write], we will kill you, this is your last warning… #we_won’t_be_suffocated.”

On August 17, 2020, Salimi was released from prison on bail of 500 million tomans until the end of his trial.

According to a communication received in April 2021, a hearing in Branch 26 of the Revolutionary Court was held on May 10, 2021 to defend against charges of “inciting corruption through the dissemination of sexual material,” “propaganda against the regime,” and “blasphemy.”

Based on the verdict, he was sentenced to three years in prison for blasphemy, to eight months in prison for propaganda activities, and was acquitted of inciting corruption.

Furthermore, two years and six months of the imprisonment was suspended for five years.

As an additional punishment, the court sentenced Salimi to obtain permission from the judiciary to travel abroad during the suspended sentence and banned him from membership in political parties and social and political groups.

Another part of the supplementary sentence mandated Salimi to appear in the martyrs' section of Behesht Zahra Cemetery in Tehran once a month. He was also sentenced to study and learn about lifestyles and emotion control in an institution in Qom and to write a 120-page dissertation on psychological analysis of religious modernism in coordination with the Tehran Islamic Culture and Guidance Office.

The charges against Salimi were brought because of his translations and writings of books and articles such as "Theories of Gender Studies."

"Worse than just being imprisoned are these supplementary sentences, which are becoming more and more prevalent these days, forcing people into a kind of re-education camp," Salimi wrote in an open letter protesting the sentence.

"I must say that the suspension [of my imprisonment] is a clear example of an attempt to move from punishment to control," he wrote, referring to a part of his lawsuit that referred to the "suspension sentence" as "restorative justice."

Salimi emphasized that nowhere in the proceedings had he been presented with substantiated evidence alleging blasphemy, and that the setence of 44 months prison handed down against him constituted an oppressive sentence.

No information has been released on the enforcement of the sentences.

Salimi’s Article: “Political Literature, the Talisman of the Oppressed People”

Mehdi Salimi is the author of the article “Political Literature, the Talisman of the Oppressed People,” which was published in 2019. The article is a historical overview of Iranian uprisings throughout history until the November 2019 protests.

In an excerpt, Salimi wrote: “One day, [Ahmad] Shamloo, who was writing during the social conditions following the August 1953 Iranian coup d'état, spoke about [Sohrab] Sepehri's poems and said: ‘Don't muddy the water!’ These social conditions, which necessarily affect art and literature, as well as other areas of culture, can be called ‘emergency conditions.’ Now, after the January 2018 uprising and especially after the bloody events of November this year [2019], we are in the midst of an emergency ... What can literature and art do in such an emergency? If ‘guidance literature' is merely representative, what is the point of 'contagious literature'?”

Salimi translated Castration or Decapitation? by Hélène Cixous and The Lacanian Real by Slavoj Žižek. He is the author of two books, The Sorrow of Siavoshan, published in 2019, and Theoretical Violence, a collection of articles on art and critical aesthetics, which was published by Iran Free Publishing in Sweden in 2016.