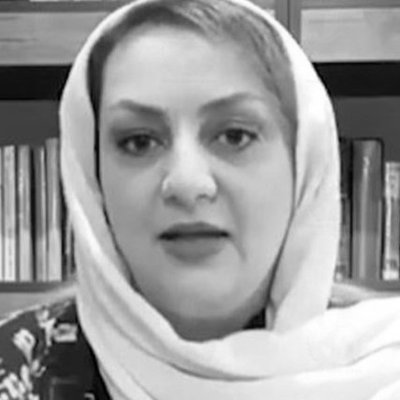 Six years’ imprisonment, 36 months of which is enforceable

Mojgan Kavousi is a researcher and translator from Kurdistan. She was arrested during nationwide protests in November 2019 and was sentenced to at least six years in prison on several charges, including “propaganda against the state.” Kavousi was also charged with “inciting people to disturb the order and security of the country” due to a post she published on her personal Instagram account captioned with the three-word sentence “Silence is Betrayal.”

Kavousi was arrested on November 18, 2019, when agents from the Islamic Republic Guards Corps (IRGC) Intelligence Protection Organization raided her father's home in Nowshahr. She was transferred to the IRGC Intelligence Organization detention center in Sari. At the end of the investigation phase of her case, she was formally charged on December 7 and transferred to Nowshahr Prison.

Kavousi was released from prison on a bail of 100 million tomans on December 19, 2019, until the end of the court proceedings against her.

According to Article 134 of the Islamic Penal Codes for Severe Punishments, 36 months of the prison sentence for the charge of “inciting people to disturb the order and security of the country” is enforceable.

On May 19, 2020, Kavousi was arrested and transferred to Nowshahr Prison to begin serving her prison sentence.

A few days prior to her arrest, on May 12, 2020, Kavousi found out that Branch 2 of the Enforcement of Criminal Sentences for the Public and Revolutionary Prosecutor's Office of Nowshahr had issued a warrant to enforce the 36 month prison sentence against her without giving her any prior formal notice.

Mustafa NIli, Kavousi’ lawyer, spoke about his client’s arrest in a statement, saying: “My client, Ms. Mojgan Kavousi, is a writer and researcher who has been sentenced to a total of 76 months and 15 days imprisonment, of which 36 months are enforceable based on the principle of the aggregation of sentences. Today she was summoned in order to serve her sentence. However, contrary to Article 500 of the Code of Criminal Procedure, the enforcement of Kavousi’s sentence was carried out without the issuance of an arrest warrant.”

In addition to this, according a report by the Human Rights Activists News Agency, the Municipal Intelligence Office of Nowshahr claims that Kavousi had also been banned from leaving the country since September 13, 2019, as part of her sentence for the charge of “propaganda against the state and propaganda against religion.” However, she was never notified of this travel ban.

Kavousi has twice gone on a hunger strike to protest prison conditions. The first time was in September 2020 in protest of "illegal actions by Evin prison officials," "lack of leave," "gender discrimination" and "barring telephone contact with family." She broke her hunger strike on September 26, 2020 after being taken to hospital for medical treatment.

Her second hunger strike was on May 16, 2021 to protest the behavior of prison officials and judges toward the prisoners. A relative of the Kavousi family told the Kurdistan Human Rights Network: "Mojgan Kavousi's protest is against the treatment of prisoners by prison officials and the judiciary. The main point of this protest is the biased and unregulated treatment by judges in granting leave to prisoners, specifically with regards to the judiciary’s order about the fourth wave of Covid-19. Discrimination against prisoners' right to leave is due to the intervention of different judicial officers [about the decision made] for each prisoner and is clearly a violation of the law and the rules governing the prison and the prison sentences."

Kavousi is a believer of Yarsanism, also known as Ahl-e Haqq, a Kurdish religion with approximately three million followers in Iran. Kavousi had previously translated a book, The Anfal and the History of Timur: The Only Surviving Mass Graves of Women and Children Killed During the Anfal, which was published by Tavakoli Publications in Tehran in 2019.