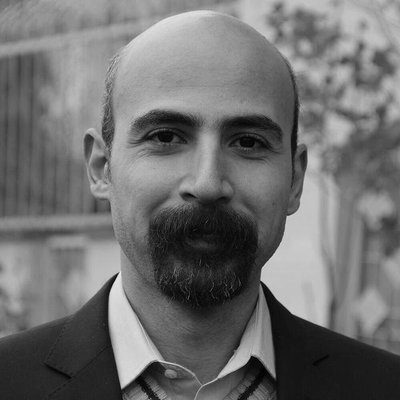 Mostafa Abdi is currently serving a three-year sentence at Evin prison for his work at the Sufi news site Majzooban Noor.

"Gonabadi dervishes, and members of Iran’s other religious minorities, suffer discrimination, harassment, arbitrary detention and attacks on their prayer houses. "

When he was arrested in 2011, 15 of his fellow employees at the website were also detained and harshly interrogated and kept in solitary confinement in Ward 209 of Evin Prison before being released on bail. His trial began in May 2012 at Branch 15 of the Revolutionary Court presided by Judge Salavati.

Over two court sessions, he refused to defend himself due to the illegality of the hearing process and because his lawyers were not allowed to be present. Then on July 13th 2013, Judge Salavati sentenced him to three years in prison for “conspiracy against national security” for his work at Majzooban Noor. After his conviction, Abdi wrote a letter to the prosecutor at the Judicial Disciplinary Court in which he complained about Judge Salavati’s unlawful behavior, including him "not allowing defense lawyers to attend the court” and his "violation of the principle of neutrality.”

On August 31st, nine Gonabadi dervishes, including Mostafa Abdi, who were being held in Shiraz and Evin prisons, went on hunger strike to protest against their treatment, which included their transfer to a ward for common criminals, having to wear prison uniforms during family visitations, and their isolation from other prisoners. The hunger strike aroused sympathy from many people both inside and outside of Iran culminating in a demonstration in Tehran.

“Hundreds of supporters of the nine hunger strikers gathered outside the Office of Tehran’s Prosecutor in Arq Square, Tehran, on 21st and 22nd September, to support their demands that the authorities respect the civil rights of Gonabadi dervishes as equal members of society,” reported Amnesty International. “Those present at the protest reported that riot police were deployed to disperse the crowd, arresting over 800 people, and injuring at least 60, including several children, using batons, electric cables, buckshot and tear gas.”

“Gonabadi dervishes in Iran consider themselves Shi’a Muslims,” explained Amnesty International. “They are Sufis who describe Sufism as neither a religion nor a sect, but rather a way of life by which people–from any religion–may find God. Gonabadi dervishes, and members of Iran’s other religious minorities, suffer discrimination, harassment, arbitrary detention and attacks on their prayer houses. President Rouhani’s Special Advisor on Ethnic and Religious Minority Affairs, Ali Younesi, stated in February 2014 that ‘Muslim sects like dervishes’, must not experience arbitrary restrictions and abuses in practicing their faith and must receive protection from the police. The persecution of dervishes, which increased after a speech by the Supreme Leader in the religious city of Qom in October 2010 denouncing ‘newly created circles of false mysticism’ has, however, continued unabated.”

On September 12th, Reporters Without Borders published a statement saying that it “is very worried about the many journalists and netizens who continue to be detained despite suffering serious ailments, and condemns the lack of adequate medical treatment in the prisons where they are held. There is currently a great deal of concern about the physical condition of a group of detained contributors to the Sufi news website Majzooban Noor who began a hunger strike on August 31st in protest against their prison conditions.”

On October 3rd, the dervishes ended their hunger strike, stating they did not want to expose their supporters to more pressure and worry. Mostafa Abdi is now serving his three-year sentence at Evin Prison.