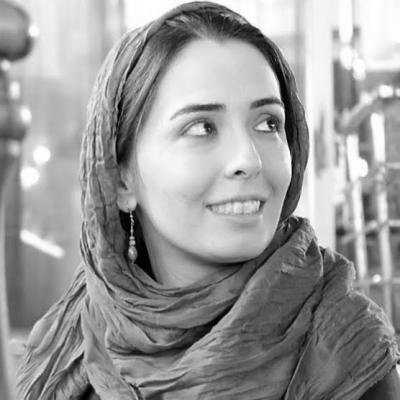 "They searched every room, even the storeroom, though they were not particularly destructive. They took away notebooks and computers. A few days before, [former president] Mr. Khatami had sent Reyhaneh a handwritten birthday card, which she had framed. They took that too.”

On November 17th, 2015, she was sentenced to one year in prison for "spreading propaganda against the regime." In the last five years, Iranian authorities have arrested Tabatabaei three times.

"They searched every room, even the storeroom, though they were not particularly destructive. They took away notebooks and computers. A few days before, [former president] Mr. Khatami had sent Reyhaneh a handwritten birthday card, which she had framed. They took that too.”

In June 2014, when journalist and political activist Hossein Noorani Nejad was sentenced to six years in prison, Reyhaneh Tabatabaei wrote on her Facebook page: “the message is loud and clear.” Soon after, she was called into the prosecutor’s office at Evin Prison, and was told a new charge had been brought against her: propaganda against the regime.

A few days later, on June 21st 2014, she was arrested. Tabatabaei’s family settled the bail immediately, but she was not released. Instead, she was taken to the women’s ward at Evin Prison to serve a previous sentence of two years. Tabatabaei’s mother says she herself was summoned for interrogation and asked to provide proof that the bail money had been paid. She challenged this: “Why should I give you the document when you have sent my daughter to prison?” When she asked for further explanation, she was told that authorities had simply changed their minds and that Tabatabaei would have to serve time in prison. “The charges were ridiculous,” her mother says.

The interrogator said that the original charge against her had been conspiracy, but “since she is a good and honest girl, we just charged her with propaganda against the regime.” Her mother believes that one of the reasons her daughter has been targeted is because she attended an event organized by President Rouhani’s staff. “I believe they want to kick the ball into Mr. Rouhani’s court,” she says. She thinks her daughter has been used to settle scores against Rouhani, making him responsible for the journalist’s incarceration—or at least attack reformist politicians. “They want me to condemn him,” Tabatabaei’s mother said. “But Reyhaneh was neither the host nor a speaker at the event. She was just one of the people who attended the gathering. Are they going to arrest everybody who attended?”

This was the third time Tabatabaei had been arrested. Her support for Green Movement activists—labeled the “sedition” movement by the Iranian government—got her into trouble initially. She was persecuted for calling for the release of political prisoners arrested in the aftermath of the 2009 disputed election. On December 12th 2010, intelligence agents from the Revolutionary Corps arrested, interrogated and charged Tabatabaei with “trying to deny the supervisory role of the Guardian Council over elections”. She spent 36 days in solitary confinement, before she was released on bail.

But in April 2011, she was sentenced to one year in prison by Judge Moghisei, known for his animosity towards reformists.

She was arrested for the second time on January 31st 2013, as part of a widespread clampdown on journalists. The prosecutor charged Tabatabaei and three of her colleagues with “intent to write a manifesto against the regime”, which is classified as a security offense.

“On a cold winter morning, a number of agents came to our house and arrested Reyhaneh,” Tabatabaei’s mother recalls. “She saw other agents were standing in the alleyway behind the window. Reyhaneh invited them in. ‘No,’ they said. ‘We are from the vice squad and are after drugs a floor above you.’ And Reyhaneh told them ‘why are you talking nonsense? You have come for me. Come on in.’ They asked if my husband was in and when I answered yes, they came in. They searched every room, even the storeroom, though they were not particularly destructive. They took away notebooks and computers. A few days before, [former president] Mr. Khatami had sent Reyhaneh a handwritten birthday card, which she had framed. They took that too.”

Intelligence Ministry agents took her to Cell Block 209 of Evin Prison. She spent a month in prison and was released on bail.

But in June 2014, she was arrested once again. She spent five months in Evin Prison before being released on bail in November 2014.

In addition to Tabatabaei’s journalism and her support for the Green Movement, other aspects of her work have been held against her, including Facebook activity; those who have commented on her page have no doubt had their names put on file too. Even Tabatabaei’s charity work, such as a trip to the southeastern province of Sistan and Baluchistan to help orphan children, has been used as evidence against her.

Tabatabaei was informed of her sentence on November 17th 2015. Judge Salavati – who is famous for his harsh sentences – sentenced her to one year in prison and a two-year ban on joining political parties and writing for any newspaper or website on charges of “spreading propaganda against the regime.”