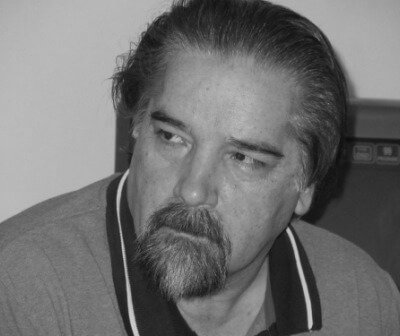 Writer, literary critic, social activist and member of the educational board of the Iranian Writers’ Association

Reza Khandan Mahabadi was born in 1960 in Tehran and is a writer, literary critic and member of the educational board of the Iranian Writers’ Association.

Reza Khandan Mahabadi was born in 1960 in Tehran and is a writer, literary critic and member of the educational board of the Iranian Writers’ Association.

On April 29, 2015, security forces raided and searched Khandan’s house for the first time, confiscating hand-written documents, archives and files, his computer hard drive and his mobile phone. Officers then handed Khandan a summons which stated that he was accused of “propaganda activity against the state” and that his court case would be heard by Branch 12 of the Culture and Media Prosecutor’s Office.

Prior to these arrests, on August 31, 2014, a meeting of the Iranian Writers’ Association was held in the courtyard of a residential complex in Tehran, for the first time in 12 years. Members of the Association came from all over Iran to attend the meeting and to elect new officers for the group. In these elections, Reza Khandan Mahabadi, Hassan Asghari, Ali Ashraf Darvishian, Mehdi Ghobraei and Bektash Abtin were elected as principal members of the leadership board, while Hafez Mousavi, Ali Abdollahi, Ali Reza Jabbari, Fanous Bahadorvand, Hamid Yazdanpanah were elected as members of the Board of Trustees for the Iranian Writers’ Association.

Judicial authorities immediately reacted to the gathering by threatening the Association with legal action. Gholam-Hossein Mohseni Ejei, then spokesman for the judiciary, said in a press conference on September 1, 2014 concerning the Iranian Writers’ Association’s general meeting, that “Any institution which is established must adhere to the the rule of law,and any current restrictions that are in place. If that institution violates restrictions, it will for the Attorney General to take legal action to prevent it from doing so. Some of these restrictions are permanent and any individuals that ignore these restrictions will be stopped.”

He added, “In relation to the Iranian Writers’ Association, I don’t have enough information to say whether the prohibition against them will be temporary or not.” Ejei also said that if the Association was disbanded, it would not be able to operate under its longstanding name.

Earlier, in January 2014, Seyad Abbas Salehi, then a deputy minister at the Ministry of Culture and Islamic Guidance, requested that the Iranian Writers’ Association’s constitution be revised. Salehi said that “If the Association sheds its skin,” i.e. changed its ways, “then it could possibly operate legally in Iran.”

According to the International Campaign for Human Rights, Khandan was interrogated and tortured three times between May 3-5, 2015. According to Khandan himself, the main purpose of these interrogations consisted of questions concerning a number of statements made by the Association and published on its Facebook page.

Khandan described the confiscation of his manuscripts and his archives, which he had collected over years, as “harassment,” adding: “Why should these individuals and their families be concerned or upset by a cultural and civil movement?”

Suspension of interrogations for three years and further charges

Khandan’s court case was suspended following his interrogation, until July 2018, when he and Keyvan Bajan, another member of the board for the Iranian Writers’ Association, were once again summoned to the Evin Prison prosecutor’s office on the accusation of “propaganda against the state.” Agents from the Ministry of Intelligence had already confiscated 120 copies of “Fifty Years of the Iranian Writers’ Association” the month before the new summons.

Khandan was later released on bail but, following a court summons on November 3, he was accused of “gathering and colluding with the aim of acting against national secuirty” as well as with “inciting women to corruption and prostitution” by Branch 7 of the Evin Prosecutor’s Office.

One source familiar with the matter told the HRANA news agency that “The accusations made in this court session have been rejected by all three defendants (Reza Khandan, Keyvan Bajan, Bektash Abtin) due to a lack of evidence, and all three have requested that the court provide proof for these allegations.”

In an interview, Khandan spoke of the reasons for the new charges, saying: “What we have deduced, from the statements and responses of the prosecutor in our cases, is that it seems some people do not think that the accusation of propaganda against the regime is enough, and that they have demanded that the case be returned to its investigative stage so that former charges can be reconsidered.”

The Iranian Writers’ Association issued a statement on November 9, in which it condemned the case against its three board members. The Association called for the charges against the individuals to be dropped and for their cases to be closed.

Arrested for being unable to meet bail

On January 22, 2019, Khandan, along with Bektash Abtin and Keyvan Bajan, appeared before Branch 28 of the Revolutionary Court of Tehran for a new hearing in their cases. But they were subsequently arrested, after failing to meet a bail of a billion tomans apiece. Judge Moghiseh also denied their requests to have a lawyer present at the time.

After the fresh arrest, the Association published a new statement, saying that “The principle behind bail is that it ensures the accused will be present in court, and so in cases where the accused appears in court, there is no justification for such an exorbitant bail.” The statement reiterated the Association’s call for the immediate and unconditional release of its three members.

The statement added that “Defending freedom of expression is, without exception, the inalienable right of all citizens, and this includes the members of the Iranian Writers' Association. Therefore, no one should be prosecuted or sentenced [to penalties] for exercising this right. This is especially so since their incontrovertible rights have been suppressed in the ‘courts’ in the manner of the ‘Balkh Courts,’” the statement adding, with reference to Persian literature.

Less than a week later, on January 26, 2019, Khandan and his two colleagues were released on bail after all. The court proceedings were presided over by Judge Moghiseh and the hearing was held on April 27 and 28, 2019.

On May 3, 2019, the freedom of expression organization PEN International issued a statement in which it expressed concern over the sentencing of the three members of the Iranian Writers’ Association. “We stand with our Iranian colleagues who have been targeted for their writing and their peaceful activities,” PEN International said in a statement. “We also call on the Iranian authorities to drop the charges against these individuals and respect their right to the freedom of expression.”

Eighteen years in prison for Khandan, Bajan and Abtin

On May 15, 2019, lawyers for the three accused, Nasser Zarafshan and Razieh Zaidi, announced that they had been sentenced to a total of 18 years in prison.

According to the verdict issued by Branch 28 of the Revolutionary Court of Tehran, presided over by Judge Moghiseh,Khandan, Bajan and Abtin were each sentenced to a year in prison for “spreading propaganda against the state” and five years in prison for the “gathering and colluding with the intention of committing actions against national security.” The sentences, for six years in prison each, was the equivalent of 18 years in prison across all three individuals.

The Iranian Writers’ Association published a statement in which it condemned the verdict issued against its three members.

“The three writers have been sentenced to a total of 18 years imprisonment for simply being members of the Iranian Writers’ Association, for publishing a private journal for a cultural organisation, for gathering documents for a book to commemorate the Association’s fiftieth anniversary, for visiting the graves of Ahmad Shamloo, Mohammad Mokhtari and Jafar Pooyandeh, for signing statements defending the freedom of expression of writers and artists, and for opposing executions and censorship. Which of these could be considered related to ‘national security’? How can publishing a journal or protest statement be considered actions against national security? Whose security is endangered by the membership of the Association and going to the graves of poets or writers? Any court that has even the smallest modicum of justice or independence, and observes even the most basic notion of human rights, would consider that this doesn’t constitute any form of ‘evidence’ but rather just an excuse to file a criminal case.”

On May 18, approximately 900 members of the Association wrote to the country’s executive and judicial authorities, calling the prison sentences “a grave violation of the fundamental rights of the Iranian people” and demanding the exoneration of the three Association members as well as their immediate acquittal and release.

Appeal in the absence of the accused

In December 2019, Branch 36 of the Appeals Court of the province of Tehran, presided over by Judge Ahmad Zargar, the sentences against the three were largely upheld; but Bajan’s sentence was reduced to three years and six months in prison.

The Iranian Writers’ Association published another statement in response, saying “The whole process of this case, from the beginning until now, has been completely inhumane and in contempt of the process of justice.” The Association also called on writers, artists, and cultural and human rights organizations to protest the court’s rulings and to call for their repeal.

Summons to enforce the court’s sentence during the coronavirus outbreak

On March 10, 2020 – in the midst of the coronavirus outbreak in Iran, with concerns mounting about the health conditions for prisoners during the outbreak – the three jailed members of the Iranian Writers’ Association were summoned to Branch 1 of the Sentence Enforcement Department of the Prosecutor’s Office of Evin Prison for them to begin serving their sentence.

The summons came despite Ebrahim Ra’isi, the head of the Iranian judiciary, having previously issued a public letter which stated that, to limit the spread of coronavirus, judicial authorities had been requested to defer jailing convicted individuals who were either released on bail or had yet to begin their sentences except in “vital” cases.

The Iranian Writers’ Association again responded to the latest developments, saying “The judiciary is determined to imprison these three writers. And at this point, with the coronavirus spreading so rapidly throughout the country and taking so many lives, does it mean anything other than that security and judicial officials want to send their critics to be sacrificed? The issuance of such rulings and statements by the judiciary of the Islamic Republic is a clear and obvious sign that this institution is not adhering to the most basic moral and human rights standards.”

On the evening of March 10, 2020, Bektash Abtin wrote on his Instagram page that he, along with Keyvan Bajan and Reza Khandan Mahabadi, had been summoned to Branch 1 of the Holy Martyrs Court, so that their prison sentence could be enforced. The summons required them to present themselves to the court within four days.