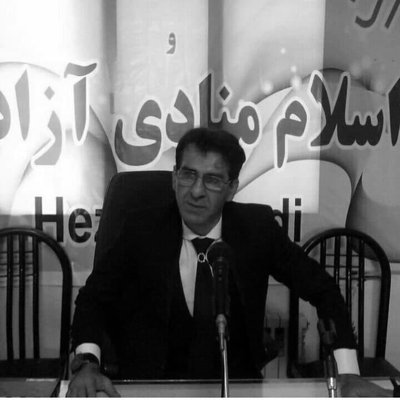 Reza Taleshian Jelodarzadeh is a journalist, sociologist and member of the International Federation of Journalists, and a veteran of the 1980-88 Iran-Iraq war. He was sentenced to prison for publishing material online critical of the Islamic Republic.

He was charged with “propaganda activities against the regime,” “disturbing public opinion in cyberspace” and “insulting the clergy.” Branch 26 of the Revolutionary Court of Tehran was in charge of his case.

According to the journalist, who described the charges and the court documents, his case file was 93 pages long and included articles published by him on social media.

Mr. Jelodarzadeh was sentenced to three years in prison and fined 4,000,000 tomans in June 2020. Additionally, Branch 26 of the Revolutionary Court of Tehran banned him from any professional, political and social activities for two years.

This member of the International Federation of Journalists was sent to Fashafouyeh, the Greater Tehran Penitentiary, on January 20, 2021 to serve his sentence.

On February 20, 2021, Journalism is Not a Crime was provided with an audio file in which Mr. Jelodarzadeh provided more details about the court documents. In this audio recording of a telephone conversation from inside the Fashafouyeh prison, he explained that the charges were directed against him only because of a few cases of analysis, criticism and opinion.

Elsewhere, he explained that the court's example for issuing such a verdict included a comment he had written under an article by Masih Alinejad, an Iranian journalist living in the United States: “Masih, you have a lot of enemies,” he wrote in the comment. “The exact phrase appears in my case,” he said.

Jelodarzadeh also said: “Is it a lie what I wrote about the 40-year record of the Islamic Republic; at a glance, arrest, imprisonment, confinement, torture, execution and death?"

Regarding the other documents of the court, the journalist said that the verdict against him is a clear example of his statements: “Is it possible for a government and a political system to be free of any criticism and error? I wrote that although hijab is a religious duty and is obligatory on us Muslims, from a sociological point of view in a pluralistic society, with different religions and schools of thoughts, I think any compulsion, including on hijab, is a sign of bad taste and tyranny.”

Commenting about Sepideh Qolian, a labor activist, is another topic that was included in Jelodarzadeh’s case.
Jelodarzadeh had also said that he had officially started his hunger strike since February 21, 2021.

The journalist had said that he needed an Avonex shot once a week due to his injuries and illnesses from the war. But by mid February, it had been more than five weeks since he had received any shots.

Noting that he had two seizures during this time, he said: “In both cases, the ward doctor and the doctor of the Fashafouyeh prison referred me to a hospital urgently. But, with thousand of ifs and buts, it didn’t happen.”

Jelodarzadeh emphasized that his illness had been diagnosed as “incurable” and that he had been advised to live in a stress-free environment.

Mr. Jelodarzadeh was sentenced to one year in prison by the Revolutionary Court in 2011 on charges of “propaganda against the regime.”
He was also arrested by the Ministry of Intelligence in 2014, when he was the editor of the political section for Tose'e newspaper.
In those years, Jelodarzadeh was the managing director of the banned weekly Sobh-e Azadi.

He also chaired the policy council of Noor-e Azadi, which previously operated under the name Sobh-e Azadi. This magazine published its first issue in 2010; however, after the publication of 14 issues, on October 19, 2011, coinciding with the opening of the press exhibition, it was officially banned due to what was described as “violation of the limits of the press and insistence on it.”

In 2017, a new publication called Noor-e Azadi was published for a year in a pre-issue and an issue, but due to the increase in paper prices and financial problems, it was not published again.