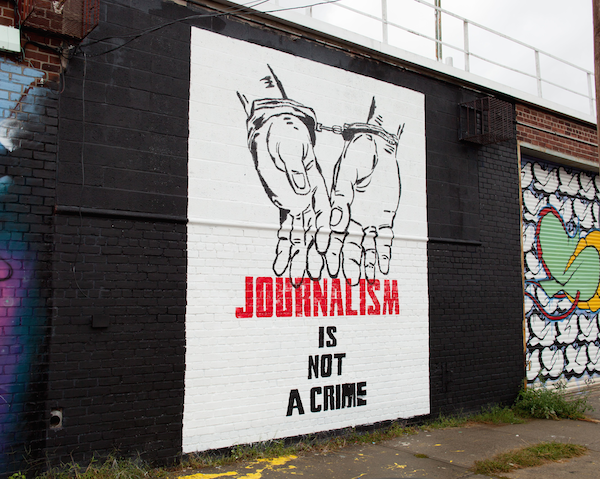 Across the City of New York, internationally renowned artists are fighting for better human rights in Iran. Through a street art campaign, awareness and support for the cause is being raised, whilst also provoking debate, and even anger, among certain people.

Through work with Street Art Anarchy, the #NotACrime campaign is behind the capital city’s most ambitious mural art project to date– all in order to prompt conversation about human rights violations in Iran.

Many of the art pieces promote freedom of expression and of the press by making a stand against the vast number of journalists, bloggers, editors, artists and photographers in Iran that are systematically subjected to intimidation, arrests, imprisonment and torture at the hands of the Iranian government.

The murals, which are hard to miss, have succeeded in sparking considerable attention and debate around the city, although not always in a desirable way. In Brooklyn, Faith47 painted jailed Iranian artist Atena Farghadani, but neighborhood vandals were quick to deface the artwork with red paint. For an overview of the #journalismisnotacrime artists and murals, including the Atena image, read more below.

Italian artist Jacopo Ceccarelli, known as "2501", began doing graffiti at the age of 14 before going to the South American school of street art in Brazil where he developed his artistic style – depicting nature through the abstract. His works have been exhibited all over the world, including at the Museum of Contemporary Art in Rome. In support of #NotACrime and greater artistic and journalistic freedoms in Iran, 2501 painted a public mural on the corner of 24th Street and Lexington Avenue of birds breaking free from a cage.

American artist Ron English is known as ‘The Godfather of Street Art.’ He coined the term ‘Popaganda’ to describe his work that opposes corporate-run societies and that aims to uncover the truth behind consumer advertising. English has produced artwork for several famous musicians and written a total of seven books. Some of his most influential work includes the infamous ‘Abraham Obama’ painting in the run-up to the 2008 presidential elections. For #NotACrime, English has painted his own version of the “three wise monkeys” with the message ‘see no evil, speak no evil, hear no evil.’ See the artwork at 819 Broadway and Ellery Street in Brooklyn.

#RonEnglish > > For #NotACrime, @RonEnglishArt has painted his own version of the three wise monkeys with the message ‘see no evil, speak no evil, hear no evil.’ #Iran #HumanRights #StreetArtAnarchy #JournalismIsNotACrime #StreetArt > > > Location: 819 Broadway and Ellery St, Brooklyn

Iranian-American Nicky Nodjoumi was exiled from Iran in 1979 for artwork that was critical of the Shah. He now lives in New York and his art is exhibited at a number of big artistic venues, including the Metropolitan Museum of Art and the British Museum in London. His #NotACrime piece is located in Long Island City at 11-22 Welling Court and is of a pair of hands in handcuffs with the words “Journalism Is Not A Crime” emblazoned across the work.

#NotACrime Nicky Nodjoumi was exiled from Iran in 1979, for creating artwork that criticised the Shah’s #regime. He currently lives in #NewYork and has painted this striking mural in Long Island City #JournalismIsNotACrime #Iran #StreetArt #Iran #Journalists #jasonrezaian in partnership with @streetartanarchy

Faith47 is a South African street artist whose career spans more than 15 years and that explores global political issues through her art. Her work has been at exhibitions all over the world. For #NotACrime, Faith47 painted a mural of Atena Farghadani, an Iranian artist and political activist that was sentenced to almost 13 years in prison in Iran for drawing a politicized cartoon.

The mural, which is located on Colombia and Woodhull Streets in Brooklyn, shows Farghadani in a headscarf without a mouth. The artwork has since become the focus of a divisive debate in the neighborhood in which some people view the image as an anti-American message that is disrespectful to the victims of 9/11. In protest, the image has been splattered with red and white paint on three occasions.

”We’re speaking of issues of freedom of speech, or censorship, within Iran,” the artist wrote on her Facebook page. “But in fact what the mural highlighted was those same issues and latent racism affect individuals in a small community of New York.”

@_faith47 #NotACrime #NYC FAITH 47 paints for Atena Farghadani - a 28 year-old #Iranian cartoonist / activist who is currently a prisoner of conscience. Faith's poignant mural in #Brooklyn was defaced by locals, yet her message is now even more timely: #JournalismIsNotACrime #Iran #Intolerance #Art #HumanRights #StreetArt #SocialChange in partnership with @StreetArtAnarchy in #newyork

The brothers Icy and Sot are originally from Tabriz, Iran, and are famous in the Iranian urban art culture for their artistic accomplishments. They now live and work in Brooklyn, NY where they continue to dismantle pre-conceived notions of Iranian tradition through their stencil street art. Their work encompasses themes of human rights, justice, social and political causes. For #NotACrime, the duo has used their signature black and white stencils to depict imprisoned Iranian cartoonist Atena Farghadani with a backdrop of protesters, to show support for freedom of expression in Iran. The mural is located on 819 Broadway and Ellery St in Brooklyn.

@icyandsot journalism is #NotACrime . The iconic #Iranian street stencilers who now reside in Brooklyn finish up a magnificent protest piece on a stormy, yet optimistic #nyc day. The artists have used their signature black and white style to depict imprisoned Iranian journalist Atena Farghadani, to show their support for freedom of #journalists in #Iran. Location: Address is 819 Broadway and Ellery St in Brooklyn @streetartanarchy @bkstreetart @streetartnyc @streetartnews