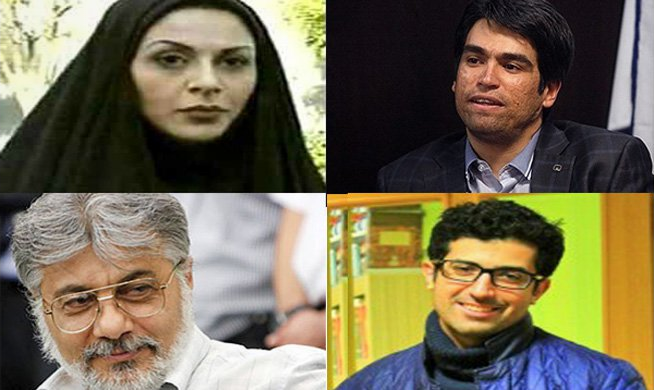 At least five journalists have been arrested in Iran the past two days. They are now being accused, on live television, of taking part in a “multi-layered” infiltration network that is “trying to recruit journalists and media activists inside Iran.”

A few hours after news emerged that five journalists had been arrested, two experts affiliated with Iran’s Revolutionary Guards gave live interviews on a popular Iranian TV program. The experts did not appear in person, but explained through phone interviews the motives behinds the arrests.

Using a television broadcast to inform the public of these developments could be a sign that the arrests will not just be limited to the five, but a part of an extensive plan being carried out by the Revolutionary Guards.

An expert from the Intelligence Unit of the Revolutionary Guards explained how the journalists, who had been under the unit’s surveillance the past two years, were members of a “multi-layered” network “trying to recruit journalists and media activists inside Iran.”

He accused them of receiving money through currency exchanges or individuals affiliated with “Western-dominated” media networks to implement programs designed by “security theorists of Western intelligence services.” The money, according to the expert, came from spying agencies from the United States and institutions affiliated with the governments of Norway and Sweden. He also claimed that the British government was one of the masterminds of the project.

In the live interview, the expert accused the arrested journalists of attempting to “prettify the image of America”, “changing the lifestyle” of Iranians, “preparing the ground for the official American presence in Iran” and “connecting local journalists with Iranian journalists living abroad.” The network, he said, was designed as a “pyramid” in which the individual members were unaware of each other’s connections to Western networks.

According to the expert, the network had succeeded “in a very smart manner” to take control of a number journalists, editors and managers of Iranian newspapers, and to publish articles with similar titles and content – all with the goal of influencing the Iranian regime.

Such accusations against Iranian journalists are nothing new. Hardliner publications usually call reformist media “chain media” and accuse them of coordinated attempts to put pressure on the Islamic Republic.

Certainly anyone working for foreign media has faced intimidation. Washington Post journalist Jason Rezaian has been targeted by the Guards, who published a propaganda video about the alleged espionage operation he headed up.

Recent comments from the Revolutionary Guards’ expert chime with recent statements voiced by the Supreme Leader, Ayatollah Khamenei. In the past two months, Khamenei has spoken in public five times about “the West’s project to infiltrate Iran using the nuclear agreement as an excuse” —and he has made similar accusations against certain unnamed officials and political activists in Iran.

On the live TV program, Hamid-Reza Moghadamfar, a media expert with the office of the Supreme Leader and former director-general of Tasnim News – an agency affiliated with the Revolutionary Guards – spoke about the dimensions of the so-called infiltration network.

“They also include people who have pro-Western world views and in a sense represent America without having [direct] connections to it. They are active in various areas of decision-making and the creation of attitudes among people and officials,” he said, implicitly referring to former president Akbar Hashemi Rafsanjani, who is currently the chairman of the Expediency Council. He has been a recent target for hardliners, and has been for some time.

Moghadamfar also cited the fast food chains KFC and McDonald’s as symbols of Western cultural infiltration in Iran. In recent months there have been reports that branches of the two franchises might be reopening in Iran. A KFC branch recently opened in Tehran, but was shut down the following day because it could not prove it was complying with “halal” regulations. It later emerged that the chicken restaurant had used the KFC brand without any franchise agreement or permission. And two weeks ago, Khamenei warned that importing consumer goods from the United States is banned.

Moghadamfar also pointed to the internet as a tool used by Western infiltration networks, and added that they give scholarships to “young people” to promote their own goals.

During the past year, the newspaper Vatan-e Emrouz, run by the hardliner Member of Parliament Mehrdad Bazrpash, published numerous articles on a Western scheme called “Bridge,” which, according to the newspaper, aims to attract the Iranian elite. According to Vatan-e Emrouz, one of the charges against Siamak Namazi, an Iranian-American businessman who was arrested in Tehran a few weeks ago, was that he was supporting and facilitating this project.

In another report, Vatan-e Emrouz covered the arrest of Nizar Zakka, a Lebanese-American ICT expert, claiming that he has “deep relations with the military intelligence community of the United States. There are pictures of Zakka, showing him in the American army uniform at the Riverside military base. Sources have referred to him as a ‘hidden treasure’ because of these special relations,” the report said.

On November 2, 2015, Iranian media reported that 20 other journalists have been summoned to the Intelligence Unit of the Revolutionary Guards, and that a number of journalists are likely to be arrested soon.

It appears that the the Revolutionary Guards’ Intelligence Unit intends to carry on with its strategies against President Rouhani’s administration – as a means of dominating the political scene following the nuclear agreement, and to prepare for next year’s parliamentary elections. It intends to use security-related charges to deplete, cripple and permanently damage the Iranian independent media.