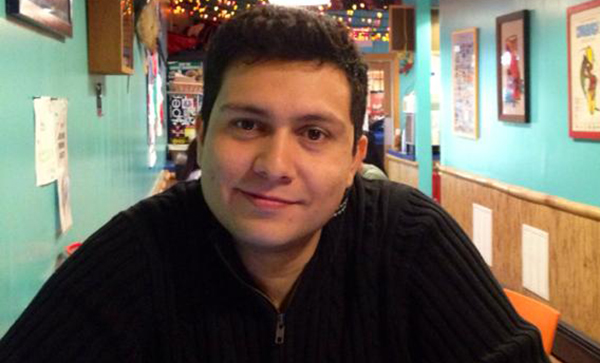 Early on the morning of November 2, Mehdi Saharkhiz received a call from his family in Iran: His father had been arrested, they told him. Again.

Isa Saharkhiz, an Iranian journalist and political figure, is one of the many activists who were jailed in the aftermath of the contested presidential election of 2009 in Iran. After four years in prison, including several months in solitary confinement, he was released in October 2013.

But Isa Saharkhiz remained outspoken in his criticism of the Iranian authorities. Consequently, on November 2, 2015, he once again stood face to face with Iran’s Revolutionary Guards. Later that day, a post on the prominent journalist’s Facebook page, which is run by his family, published news of Saharkhiz’s arrest.

In an interview with Journalism Is Not A Crime, Mehdi Saharkhiz, who is based in New Jersey, USA, spoke about the sudden arrest of his father, who despite his critical health condition has vowed to go on hunger strike – and how his detention might be a part of a larger crackdown on journalists and activists before next year’s parliamentary elections in Iran.

Your father was arrested on November 2, 2015. What happened?

Around seven o’clock in the morning, six men and one woman from the Sepah agency [Iran’s Revolutionary Guards] came to his house with an arrest warrant. They presented it and started raiding the house. They had a two-page long list of items to take, which included pictures of [Mir-Hossein] Mousavi, [Mehdi] Karroubi and [Zahra] Rahnavard, leaders of the Green Movement. They took CDs, and even American store cards and other little items as evidence that he had been working with Americans.

And they took my father. He said he would start a hunger strike, and if his arrest continues for two weeks, he will stop taking his medicine as well, which is vital to his life. The officers didn’t say where they were taking him, but we are presuming that he went to Evin Prison. He hasn’t called us, and we haven’t received any information since.

What were the charges against him? Has he done anything indicating he is guilty of these charges?

My father wasn’t doing anything. He was posting on Facebook, maybe talking in different groups, and writing articles for different websites. He hasn’t asked for any kind of demonstrations, there hasn’t been any. He was just putting his opinion out there, which according to the Iranian constitution is his right to do. This arrest is completely illegal; it doesn’t have any basis. There is absolutely no evidence presented as what these charges are based on.

How is your father’s health?

Many doctors have presented evidence and written letters of recommendation that he cannot withstand being sent to jail. We are talking about a man who has only 30 percent of his kidney working. He has extremely high blood pressure, which jumps higher under any kind of stress. He takes a lot of medication. He is morally very strong but physically he is challenged because of what happened during his last arrest, where he went on hunger strike for more than 20 days. Hopefully that doesn’t happen again.

Did you see the arrest coming?

I can’t say I saw it coming, but we are having two major elections in a few months. Near election time, they [the Iranian authorities] usually arrest people they think are very effective. And one of them is my father. I am sure there are going to be a lot more arrests over the next four to five months, unfortunately. And it’s going to be a lot harder to be a journalist and be able to talk about the elections.

Who is in charge of these types of arrests?

These arrests are completely under the power of Khamenei [Iran’s Supreme Leader]. He cannot take the smallest criticism. He wants everyone to praise and follow exactly what he says. He handpicks the head of the judiciary, which handpicks the judges. So if they don’t feel that people are praising him, they arrest those people.

What happened after your father’s arrest?

Since his arrest we haven’t had any news or information about where he is, or how he is. But a few governmental websites are now posting news about how he was a part of a big ring of people trying to bring US influence to Iran. The accusations are hilarious. You have to give credit to these people’s creativity for making up this stuff. These people should work in stand-up comedy or somewhere they can show their creativity.

He had a couple of lawyers, but interestingly his lawyers are no longer able to practice. One of them is Nasrin Sotoudeh, who was disqualified as a lawyer. That’s another hilarious part of the story: In Iran, lawyers who defend people become criminals and then get sent to jail for years and their lawyer’s certificate is taken away from them. Now, we don’t know if there is anyone representing him, or if he needs a lawyer or not.

Your father has already spent four years in jail. After his release in 2013, did he ever consider leaving Iran?

After he was released he was not allowed to leave the country. But knowing my father, he would never want to leave Iran. He wants to stay and fight, that’s what he stands for and what he has been doing his whole life. Freedom of speech in Iran never got better. He is willing to fight for Iran’s freedom to whatever extent that may be.

What is your biggest concern now?

I just hope that he is well and physically able to endure what’s happening to him. Mentally I think he is fine; he believes in what he is doing, and the fact that they are going after him just shows how scared they are of him.

On the arrest of journalist Isa Saharkhiz, one of many independent journalists arrested in Iran's latest crackdown.Read more: https://journalismisnotacrime.com/en/news/627/

Opslået af Journalism Is Not a Crime på 4. november 2015

Read more about Isa Saharkhiz on his profile.