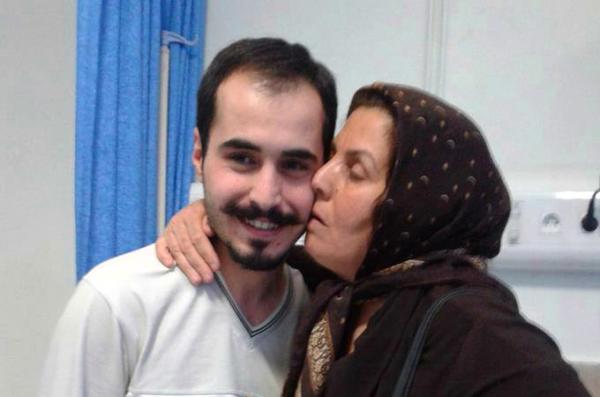 Iranian blogger and activist Hossein Ronaghi-Maleki has been summoned back to Evin Prison to resume serving his 15-year sentence, despite his critical health condition.

In a message posted on Twitter on January 11, Ronaghi-Maleki wrote: “In seven days I must return to prison, but not with my own feet…”

Hossein Ronaghi-Maleki was sentenced to 15 years in prison for his work as a human rights activist and blogger. Prior to his arrest, he had been suffering from kidney problems, but his conditions worsened further while in prison due to physical abuse and a lack of medical care.

But the prosecutor’s office has now ordered him to return to prison by January 18, 2016. Addressing him in a letter, authorities told Ronaghi-Maleki that if he did not return to Evin Prison he would not get his bail money back.

“They insist I return to prison although my health is very bad,” the blogger and activist wrote on his Instagram page. “Sending me back to prison is incomprehensible and illegal.”

He also said that doctors have recommended he not return to jail, as it would worsen his condition.

Ronaghi-Maleki and his brother Hassan were arrested in the aftermath of the disputed presidential election of 2009. Both were taken to Evin Prison and put under intense physical and mental pressure in an effort to make them sign confessions. His brother, who was not politically active, was arrested in order to put added pressure on Hossein to confess. Hossein was sentenced to 15 years’ imprisonment.

In September 2014, Ronaghi-Maleki was released prematurely. Due to his serious health issues, it was thought that he would not live to serve out his sentence. But soon after his release, he was re-arrested in early 2015 and sent to Ward 8 of Evin Prison. Now he is being sent back to prison once again.