The War on “Sinful” Music Concerts in Iran 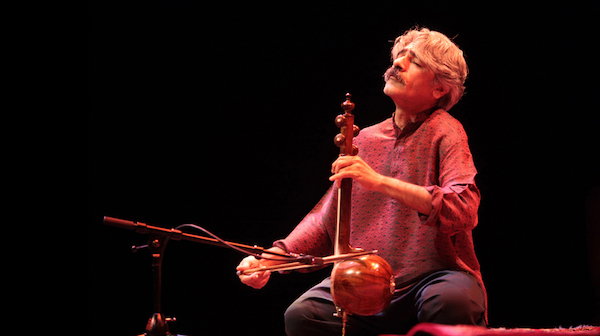 Since the 1979 Islamic Revolution in Iran, religious leaders and hardliners have imposed tight regulations and extensive bans on the country’s musicians, and demanded they conform to and promote strict Islamic values. Despite the election of a moderate president in 2013 and government measures to loosen up on some of these regulations – including granting a greater number of licences to bands to stage concerts – Iranian artists continue to work in a repressive, even hostile climate, and are repeatedly targeted by hardliners.

During the week of May 9 alone, local authorities canceled two concerts by famous Iranian musicians, who had been scheduled to perform in the city of Nishapur in Razavi Khorasan Province – concerts that had already received the necessary permissions from the Ministry of Culture and Islamic Guidance.

One of the musicians, Keyhan Kalhor, an Iranian Kamancheh player, composer and the winner of several Grammy awards, was touring around Iran with the music group Rah-e Rouh and other prominent performers. As the group was just about to travel by plane to Nishapur, they received unexpected and disappointing news: The local prosecutor had canceled the concert. He gave no explanation for his decision.

Then, just a few days later, the same city authority canceled another concert by Shahram Nazeri, one of Iran’s best-known Persian traditional music composers and vocalists, who has won many prizes and has appeared on stage with leading Iranian ensembles.

The culture minister Ali Jannati was quick to deny the ministry had any direct responsibility for the cancellations. “The best I could do,” he said, “was to write a letter to the head of the judiciary.”

Yet, the cancellations sent a shock throughout Iran, with artists and fans questioning how the concerts could be called off when they had both obtained all required legal permissions to perform.

“When the concerts of two prominent musicians are canceled, how can other musicians like me have job security in Iran?” asked Soroosh Ghahramanloo, an Iranian singer for the band Noush, in an interview with IranWire, Journalism Is Not A Crime's sister website.

Musicians, producers, and organizers already face harsh regulations from Iran’s Ministry of Culture and Islamic Guidance, from which they must obtain official permission to hold a concert, a requirement that gives authorities the power to closely control the music scene and ensure it lives up to so-called Islamic norms and standards.

“The process of getting permission is tough, it costs a lot of money and it’s a hard process,” Ghahramanloo said. “So it’s disappointing to find out that a performance that has obtained the correct permission can’t take place.”

Since the election of the moderate President Hassan Rouhani in 2013, the number of Iranian bands permitted to perform concerts has surged. Yet, as the recent cancellations prove, it is not unusual for local authorities – often ultra-conservative forces, who consider music, singing and dancing a haram or “sinful” act – to defy the decisions and permits issued by the ministry. Consequently, musicians and their fans are caught up in the ongoing power struggle between moderates and hardliners concerning the role of religion in the country.

The Musicians’ Many Do’s and Don’ts

The strict permission requirements are not the only obstacles musicians face in Iran; in fact, religious censorship of music goes much further than that. Musical instruments are banned on television, solo female artists are prohibited from performing in front of audiences, universities are not allowed to host concerts on campus, and musicians are consistently banned, imprisoned and harassed by authorities. In February 2016, for instance, three artists were sentenced to three years in prison on charges of “insulting the sacred” and “propaganda against the regime” in connection with the production and promotion of underground music.

Ghahramanloo said that authorities monitor musicians so closely that he personally struggles to concentrate during his performances, being constantly worried about every step he takes, and every movement in the audience – which could have major implications on his future career.

“A musician is under huge stress and pressure during a performance,” he explained. “There are many rules and do’s and don’ts. I’m always under a lot of stress when I go on stage – and it’s not related to my profession.”

The do’s and don’ts involve everything from clothing to song choices. In addition, performers and audience members are prohibited from dancing.

Even in the capital Tehran, where the official approach to music is somewhat more liberal than in the rest of the country and the formal barriers to performing are fewer, artists are given no guarantees everything will go smoothly.

“The problems in Tehran are of a different nature,” Ghahramanloo said. “When we have concerts in the capital, the morality police will be in front of the gate. Although most of the audience follow the rules, the presence of the police brings tension, and it impacts on our performance.”

He recalled a concert where the morality police refused to let the wife of one of the musicians enter the venue because she was wearing “un-Islamic” dress.

Officially, police oversee concerts to ensure security and safety. But in reality, Ghahramanloo said their presence becomes a source of stress for the musicians. “I am always worried until the end of the performance.”

Even inappropriate behavior from a member of the audience could cause a concert to be called off or impact on the performers’ chances of securing permission in the future. “If anyone in the audience misbehaves or does something wrong, why on earth should I as the musician pay the price?” Ghahramanloo asked.

The fact that the Rouhani administration has granted permission for increasing numbers of concerts to go ahead suggests the government is trying to ease cultural censorship across the country. But according to Ghahramanloo, the last-minute cancellations have caused huge anxiety and insecurity within Iran’s music scene, arguably causing more damage than a simple refusal to grant permission would, not least because it discourages and scares both artists and audiences.

“People buy tickets; then the concert is canceled,” he said. “As a result, they stop bothering about buying concert tickets anymore; they prefer to go to a restaurant and have pizza instead. It is cheaper and more reliable, and they don’t go through any trouble. So we are reaching the point where concerts might be allowed to take place, but no one wants to buy the tickets.”

Although the government repeatedly disapproves of local authorities’ decisions to cancel concerts that have already received a permit, the cancellations clearly prove that the Ministry of Culture and Islamic Guidance is simply unable to uphold their own procedures, Ghahramanloo said.

In July 2015, the clash between hardliners and the Rouhani administration over cultural policies was so fierce that the music director for the Ministry of Culture and Islamic Guidance was forced to resign. Prior to his resignation, several concerts were cancelled after protests from extremist Islamist groups.

“In my opinion,” Ghahramanloo said, “it’s better to end the whole process of getting permission from the ministry because it doesn’t have the power to defend its own work and licenses. It’s a waste of time and money. Instead, we musicians should get our license from those who have the real power.”