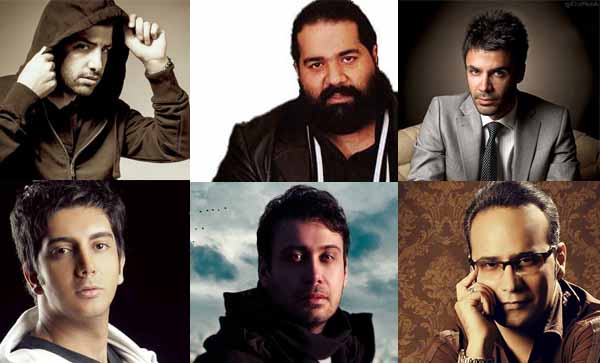 This article is by an Iranian citizen journalist, reporting on the ground from inside Iran. We have used a pseudonym to protect the reporter's identity.

The Intelligence Ministry has banned at least 26 popular Iranian singers, including Shahram Shokoohi, Mohsen Yeganeh, Reza Sadeghi and Sirvan Khosravi, from performing in Iran after their music was broadcast by satellite networks abroad. But the list of affected artists could be higher still, according to an extensive report published by Etemad newspaper on October 19.

According to the investigation, the music department at the Ministry of Culture and Islamic Guidance sent a letter to a number of prominent Iranian artists informing them of the ban, and the head of the department confirmed the news. The latest reports say there are at least 26 Iranian musicians and singers who have received an official ban in connection with a range of crimes including, but not limited to, “publishing music online,” “publishing music on foreign networks,” including the Washington-based Radio Javan, and for “inappropriate behavior” during concerts held outside of Iran.

Although reports are yet to be confirmed, the list of banned artists is thought to also include traditional singers like Homayoon Shajarian and Hafez Nazeri, suggesting it is not only pop artists who are being targeted.

However, the Deputy Minister for Artistic Affairs Ali Moradkhani denied the allegations. “The news that a number of artists have been banned from working with Radio Javan isn’t true,” Moradkhani told the Iranian Students’ News Agency. “I’ve never banned artists from working and I never will. We’ve always tried to provide appropriate conditions for artists so that they’re free to be active in the country. The report can’t be true.”

A spokesman for the Ministry of Culture and Islamic Guidance, Hossein Noushabadi, also said he was unaware of the bans. “I can’t pass judgment on the list as I haven’t seen it so I won’t do so,” he said in an interview with the Iranian news site Ava-ye. “So I neither confirm nor deny it. First, we need to find out if it is true or not.”

He added, “In general all musical artists are told that they’d be breaking the law if they cooperate with sites outside of the country and satellite networks that are hostile to the Islamic Republic, as it is not ‘proper’ for Iranian artists to work with these kinds of organizations. We’ve issued a set of rules to artists and we’ve warned them to abide by regulations and observe the red lines. But, unfortunately, we still witness violations despite the warnings.”

However, Noushabadi also explained that violating these rules was not, generally, punishable by a ban on their work. “In certain cases, a musician might be notified of a ban but the Ministry of Culture and Islamic Guidance would never officially publish a list like this because safeguarding the dignity of artists is important to us.”

The director of the music department of the ministry, Farzad Talebi, attempted to provide further clarity on the issue by explaining that banning artists is not permissible under departmental rules. “However, cooperating with hostile and counter-revolutionary sites and satellite networks is deemed an offence according to the laws of the country so such cooperation mustn’t happen,” he said. “All artists have been warned about this over and over again. The Music Bureau is currently working on the problem … and to remove any limitations as soon as possible.”

Music Department Not to Blame

According to Talebi, it is not the music department’s decision or responsibility to decide the restrictions placed on artists – there are other organizations that do this. “The Ministry of Culture is overseeing this matter and is the body able to override the artists’ ban. There are generally good results.”

“But the point is that avoiding cooperation with hostile sites and unauthorized satellite networks is criteria that must be followed,” said Talebi. “At the moment, there are meetings happening with some of the singers to solve the problem.”

Artist Mohsen Yeganeh was reprimanded for his actions while on a concert tour outside of Iran. Over the past few months, a number of film and theater actors have received similar warnings.

Recipients of the “ban letters” are warned that they are not permitted to publish comments or views online. It is also alleged that the judiciary summoned several musicians and singers for questioning, but this has not been confirmed.

In reaction to the news, some of the banned musicians have spoken out against Radio Javan on social media, including singer Benyamin Bahadori, who criticized the online station while he was on tour in the United States. He demanded that the site refrain from playing his music, and warned that if it refused, he would seek legal action.

Others took similar steps. When Farzad Farzin had difficulty obtaining permits to release his music and video albums because some of his material had previously been played on Radio Javan and several other “illegal” satellite networks, he criticized the site on social media and also demanded that it stop broadcasting his work. Sina Shaaban-Khani did the same.

Pop music has long had its ups and downs in Iran, especially in recent years. In 1997, artists like Alireza Assar, Khashayar Etemadi and Shah-Mehr Aghili brought pop back onto the music scene after it virtually disappeared from at least mainstream Iranian society — but it did not take long for critics to speak out against its re-emergence.

A New Campaign of Censorship

In his 2013 election manifesto, President Rouhani promised to reduce cultural censorship in Iran. After he was elected, he appointed Ali Jannati as the new Minister of Culture and Islamic Guidance, who promised to turn the ministry into a “paternal home” for artists and said he would reduce the influence of the security forces in cultural affairs, especially music. And Jannati’s deputy Ali Moradkhani went even further, by promising to bring underground music into the open and to give underground bands the “right conditions” to perform in public.

In November 2013, when two members of the Iranian-American band The Yellow Dogs were shot dead in Brooklyn, Moradkhani issued a permit to have them buried in the “artists’ lot” at Tehran cemetery, a decision that angered hardliners.

At the same time, and much less positively, the ministry refused to let traditional singer Mohammad Reza Shajarian from performing, even though President Rouhani had personally promised to put Shajarian “back on stage.”  Rouhani and Jannati’s promises to lift bans on artists have not been fulfilled, and the latest developments do little to inspire confidence in the government when it comes to cultural matters.

In fact, Jannati’s first year in office was characterized by the cancellation of numerous concerts across different Iranian cities, with traditional singers including Alireza Ghorbani and Vahid Taj being banned from performing on stage.

All of this would suggest that cultural censorship is very much ongoing, and in fact now goes much further than bans on pop music alone. Iranian artists of all different genres are being watched more closely than they have been before, whether in Iran or abroad — something of which they are all too aware.