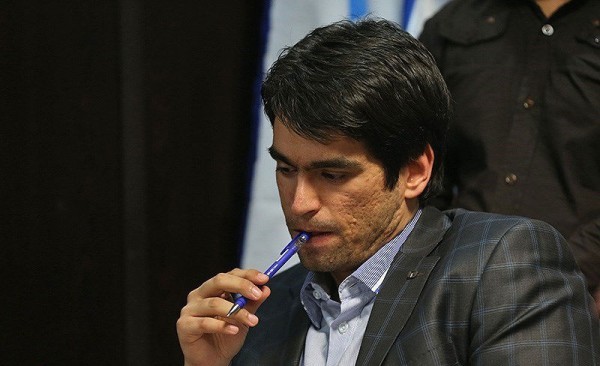 Over the last week, Iran’s Revolutionary Guards’ Intelligence Unit arrested at least five journalists working for various print and online media outlets in Iran. According to Iranian media reports on Tuesday, November 3, 2015, all the journalists are members of an “infiltration network” guilty of colluding with hostile Western governments.

The number of arrests has not been confirmed. But a Fars News Agency website close to the Revolutionary Guards put the number at five.

Speaking to Journalism is Not a Crime, the son of Isa Saharkhiz, one of the journalists arrested, said his father had been accused of “disrespecting the leader”, “trying to overthrow the government” and “trying to hold mass demonstrations against the government.”

“Nobody has contacted us and we have no information about where Mr. Mazandarani is detained,” Sam Hoseini, a relative of Ehsan Mazandarani, told IranWire. As with the arrest of Saharkhiz, Hoseini said agents arrived early in the morning. They searched his house for three or four hours, until about 10.30am. “They took away his laptop, mobile phone, tablet, handwritten documents and notes, his flash drive, his passport, his national ID, bank cards and other things,” Hoseini said. “But the date on the warrant was for last month — not the day that the arrest took place.” He said that since Mazandarani had been appointed as managing editor of Farhikhtegan newspaper, he had been under constant pressure from Iran's hardliner media.

On the same day the journalists were arrested, hardliner website Dana published an article entitled “The Discovery of the American Infiltration Network in Iranian Media,” which claimed that Ehsan Mazandarani was close to the family of Akbar Hashemi Rafsanjani, the former president and current head of the Expediency Council. It also described him as being “very active” since the 2009 presidential election.

Signs of a New Crackdown?

News of the arrests came a day after Mohammad Ali Jafari, chief commander of the Revolutionary Guards, warned that a new “sedition” was underway following parliament’s official approval of the nuclear agreement in October. “The enemy has started its work,” he told a crowd at an event billed as the first anti-American event after the nuclear agreement. “We must understand the threat of infiltration and prevent certain actions.” Marking “Fight Against International Arrogance and Imperialism Day” on November 4, the Revolutionary Guards followed Jafari’s warning with its own statement on the dangers of “infiltration” and “sedition.”

But security agents have not only targeted media workers in recent weeks. In mid-October, they also arrested Iranian-American businessman Siamak Namazi, who heads up the strategic planning office of Crescent Oil, headquartered in the United Arab Emirates. Not long after, business associates and friends reported that they had received phishing emails from his account. After Namazi's family confirmed he had been arrested, the family and colleagues of Lebanese ICT expert Nizar Zakka revealed that he had not returned home after taking part in a conference in Tehran on September 18.

On October 12, Iran's judiciary passed a verdict on the case of jailed Washington Post correspondent Jason Rezaian, without releasing details about the outcome.

Supreme Leader Ayatollah Khamenei recently coined the “infiltration network” term, using it during an address on August 17, 2015. During the speech, the leader warned that, following on from the nuclear deal, the Americans hoped to “find a way to establish their influence inside the country.” Reminding the audience of the Islamic Republic’s long history of battling such infiltration, he told the crowd, “We blocked them [until now] and will [continue to] block them in no uncertain terms.”

Since August, Ayatollah Khamenei has spoken in public a total of five times about the “enemy” and its damaging influence. “God willing, various authorities, including the Guards, will stop the enemy from infiltrating security agencies,” he told commanders of the Revolutionary Guards on September 16, emphasizing the threat of the US gaining political and cultural influence — and how vital it is that Iran’s most elite forces remain vigilant and formidable, using all their physical and moral strength to fight the battle at hand.

Post-nuclear deal, the Revolutionary Guards are determined to show their commitment to the Supreme Leader, and have prioritized his anti-infiltration strategies as a matter of urgency. At the same time, the Revolutionary Guards’ Intelligence Unit has been quoted as saying that the recent arrests took place “after months of non-stop surveillance…of all aspects and activities of this network.”

On September 21, 12 hardliner members of Iranian parliament wrote to the Intelligence Ministry, warning that hundreds of people working for the Iranian media had been linked to Western intelligence services and to collaboration with countries including Norway, the Netherlands and the United Kingdom. According to the statement, the so-called group bent on “sabotage” had close connections outside Iran, and had been linked to the leaders of the 2009 “Sedition” [the protest movement that emerged in the aftermath of the disputed presidential election] and to pro-Sedition Iranians currently residing in Western countries. The group, the letter said, was using the media to infiltrate and influence Iran. According to the hardliners, the Intelligence Ministry must take immediate action, and refer the cases of these individuals directly to the judiciary.

Just a few hours after this letter was published in Iranian media, hardliner website Mashregh News tweeted news that 12 journalists from reformist media had been arrested. The tweet was quickly taken down. But on October 7, hardliner MP Bijan Nobaveh announced that a watch-list of 12 or 13 journalists had been drawn up and that various cabinet ministers had been informed of who they were.

It is not yet clear whether the four journalists recently arrested had featured on the list. It could be that the Revolutionary Guards’ Intelligence Unit has its own list of people to watch, and to round up. So far, the charges against the arrested journalists have not been made public.

What do Journalists in Iran Think?

IranWire spoke to journalists in Iran about their impressions of the recent arrests. “The simultaneous arrests of Isa Saharkhiz and Ehsan Mazandarani — both of whom share a way of thinking with Ayatollah Hashemi Rafsanjani — cannot be unrelated to the upcoming parliamentary elections,” Tehran-based journalist “Hamid M.” told IranWire.

Reza G., a journalist who has been arrested on several occasions and spent time in jail, said, “In the aftermath of the nuclear agreement, the Revolutionary Guards are trying to prevent independent and reformist media from becoming seriously active. They also want to create an environment of insecurity for political activists.”

Reza G. said that many key members who served in Iran’s Intelligence Ministry under former president Mahoud Ahmadinejad are now working for the Revolutionary Guards’ Intelligence Unit. As a result, many independent and reformist journalists have effectively been silenced. “Newspaper directors have been warned to keep these journalists out, even though they have not officially been banned from work,” he said. In recent weeks, Guards have intimidated political activists, particularly those who have been prominent in the media and who have been sentenced but not yet instructed to start prison terms. “They have been warned they will be jailed imminently if they fail to remain silent and refrain from taking part in activities related to parliamentary elections.”

A Chance to Frame Rouhani’s Allies?

One interesting figure among those arrested is the columnist Afarin Chitsaz. According to the website Amad News, Chitsaz is the ex-wife of the famous Iranains film actor Ali Dehkardi, and has also appeared in movies and designed costumes.“ According to Amad News, as part of the recent attack on journalists, the Revolutionary Guards launched a smear campaign against her — and attempting to damage the Rouhani administration at the same time. As part of her work as a journalists, Chitsaz forged “close working relations” with Hossein Fereydoon, the senior advisor to the president, Islamic Culture and Guidance Minister Ali Jannati and other officials in the culture ministry, and Foreign Minister Mohammad Javad Zarif. It also pointed out that, prior to Rouhani becaming president, Chitsaz had spent time in Paris engaging in “artistic activities including painting and dress design.”

Since Rouhani’s election, she has written a number of editorials on foreign policy for the Iranian press. Chitsaz’s arrest is likely to be interpreted as another behind-the-scene battle between Rouhani’s government and its critics and opponents. In one of her most recent columns, the Dana site said, Chitsaz had objected to protests in Isfahan and Yazd during the former British Foreign Secretary Jack Straw’s visits to the cities.

“Saman Safarzaei is a reformist journalist who worked with the editorial board of the newspaper Etemad,” the Dana website reported, taking issue with the fact that he, along with Mazandarani and Chitsaz, had spend some time outside Iran. The site also objected to recent articles published by Isa Saharkhiz in the foreign press, and the fact that he had given interviews to foreign media agencies. For this, he could face serious charges, and Dana is playing its part in setting up such a scenario.

For its part, the Saham News website reported that on November 4, “20 reformist reporters and journalists close to Hassan Rouhani and Hashemi Rafsanjani were summoned to be questioned by the Revolutionary Guards’ interrogators.” It also said there were plans for further arrests, with 10 people on the Guards’ list. It even provided a date for the arrests: November 7.

So far, government officials have not responded to the arrests, or to the media speculation and reports.  The Guards’ own Intelligence Unit, however, has made promises to keep the public informed as it rolls out its latest chilling operation.